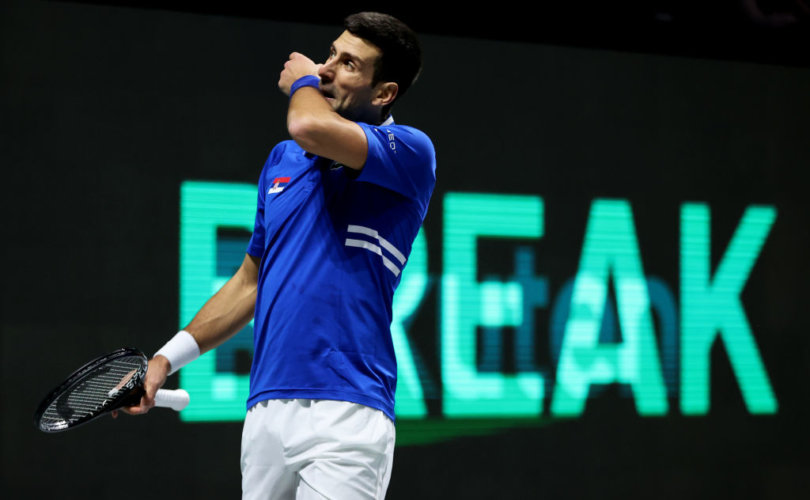 MELBOURNE, Australia (LifeSiteNews) — The world’s number one tennis star Novak Djokovic will be permitted to defend his title at the Australian Open tournament this month after being given a special exemption to the state’s COVID jab requirement.

The tennis ace revealed Tuesday through his social media profiles that he would be returning to Melbourne with an “exemption permission” from the COVID shot requirement to take part in the first Grand Slam competition of the year.

“I am ready to live and breathe tennis in the next few weeks of competition,” the star said.

In November, Tennis Australia, which organizes the Open, had insisted that no special permission would be granted to any player who had not received the jab. Djokovic has consistently refused to reveal whether he has received the shot, leading many (including his own father) to believe that the Serbian superstar would be excluded from the games Down Under.

Victoria’s Premier Dan Andrews added to speculation that Djokovic would not be allowed to play after saying last year that he would not “facilitate” players who have not received the jab.

“’I’m not very well going to say to people that they can’t go to the pub tonight unless they’re double vaccinated, but certain high-profile people who choose not to be vaccinated … I’m not going to be facilitating them coming here,” the politician declared.

The 34-year-old tennis player stated his conviction in October that a person’s medical history and decisions ought to remain private.

“I will not reveal my status whether I have been vaccinated or not, it is a private matter and an inappropriate inquiry,” he said.

Djokovic argued that “[p]eople go too far these days in taking the liberty to ask questions and judge a person. Whatever you say ‘Yes, no, maybe, I am thinking about it,’ they will take advantage.”

Earlier last year the sportsman said he has “always believed in freedom of choice,” adding that he “will keep the decision as to whether I’m going to get vaccinated or not to myself.”

The athlete did reveal his inclination not to take the jab back in April as part of a Facebook Live video with fellow Serbian athletes, saying, “Personally I am opposed to vaccination and I wouldn’t want to be forced by someone to take a vaccine in order to be able to travel.”

The move to grant exemptions marks a stark reversal from both Tennis Australia and the Australian state of Victoria, both of which had mandated that players receive a full regimen of COVID-19 shots before being permitted to join the tournament.

Tournament CEO Craig Tiley said last month that while he would “love to see Novak here,” ultimately the player would “have to be vaccinated to play,” in accordance with Victoria’s strict travel requirements.

Tennis Australia confirmed in a Tuesday statement that “Novak Djokovic will compete at the Australian Open and is on his way to Australia,” according to an AP report.

The organizers wrote that “Djokovic applied for a medical exemption which was granted following a rigorous review process involving two separate independent panels of medical experts.”

Tiley added that “fair and independent protocols were established for assessing medical exemption applications that will enable us to ensure Australian Open 2022 is safe and enjoyable for everyone. Central to this process was that the decisions were made by independent medical experts and that every applicant was given due consideration.”

James Merlino, the deputy premier of Victoria, defended the decision stating that, although “[e]veryone who will attend — spectators, players, officials, staff, everyone — is expected to be fully vaccinated,” that “exemptions are just that. It’s not a loophole for privileged tennis players. It is a medical exemption in exceptional circumstances.”

With his exemption, Djokovic, who has won the Australian Open a record nine times, will not face a mandatory 14-day quarantine upon arrival in Australia, instead being subjected to the same requirements imposed on “fully vaccinated” travellers, including taking a PCR test for COVID upon arrival and remaining in isolation until the test result returns, being released to play if he tests negative for the virus.