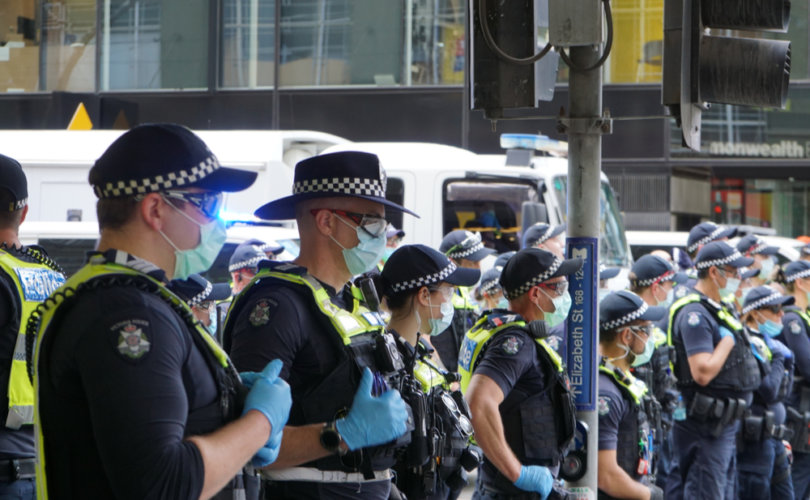 (LifeSiteNews) — An Australian state’s police commissioner has balked at enforcing his government’s vaccine passport requirement, saying his officers would not stop people in public venues and force them to show proof of having gotten the required double-dose of the COVID-19 drug.

The state’s health minister, however, said if the law requires double-vaccination, officers will “have no choice” except to enforce it.

New South Wales (NSW) Commissioner Mick Fuller, who has previously deployed massive law enforcement muscle against anti-lockdown protestors during the pandemic response, said it’s not the “role of police” to proactively stop Australians and demand they show proof of vaccination.

“The role of police in terms of vaccine passports, we will not be walking through restaurants, cafes and pubs checking if people are double vaccinated,” Commissioner Fuller said, according to the Guardian.

However, Fuller added that if business owners call for police to help them enforce the passport requirement, they will “respond to assist.”

The police commissioner of Australia’s most populous state told Sydney radio, “the police will assist restaurant owners and shop owners if they are refusing entry to someone — we’ll certainly respond to assist those people.”

As reported by the Daily Mail, Fuller asked Aussies returning to shopping and entertainment to ‘keep calm,’ noting that police expect that some businesses will call for law enforcement assistance to turn away the unvaccinated or those who refuse to show proof of their shots.

‘We are anticipating there will be businesses calling us for assistance on the right to refuse someone entry to their premises,’ he said.

The police commissioner’s remarks indicating a more or less hands-off approach by law enforcement officers in the state were challenged by NSW Health Minister Brad Hazzard, who said that when vaccine passports become law, police officers will be expected and required to enforce them.

As reported by Rebel News, Hazzard said that “[i]f the law says you have to be double vaccinated, then, of course, the police will enforce that, they have no choice but to enforce that.”

It is unclear how diligently the state vaccination mandate will be enforced by businesses.

According to Hazzard, businesses will not be fined for failing to require patrons to show proof of having been vaccinated.

Rebel News reported that on being asked “why businesses would even bother to enforce the vaccine passport mandate if they don’t face any consequences for refusing to enforce it,” Hazzard dodged the question, saying the media was “obsessing over the details.”

Following a 70% vaccination rate in New South Wales, the state is set to begin lifting its lockdown on October 11, with pubs, restaurants, and other indoor venues once again welcoming patrons.

In order for businesses to reopen, however, the state has required that Australians show proof of vaccination to access most indoor public venues.

As reported by the Guardian, NSW has announced that “only fully vaccinated people and those with medical exemptions will have access to the freedoms allowed under the Reopening NSW roadmap.”

The state is launching a two-week pilot of its app-based digital passport scheme beginning October 6.

As promised – here is an update on the vaccination integration with the Service NSW app.
1. Display – this is a draft. We have added an additional privacy feature with the show more/show less status 👍🏼 pic.twitter.com/eiUkXlBVu6

NSW residents who wish to access public spaces can show proof of vaccination in the form of a digital certificate on a smartphone using an existing government app called “Service NSW.”

The app is presently set to be opt-in, with Aussies given the alternative to present a printed copy indicating they have received two doses of the shot.

Evidence of natural immunity in the form of proof of prior infection or antibody test results is not permitted regardless of evidence which suggests that natural immunity is more robust than vaccinated immunity.

News of Commissioner Fuller’s statement that police would not be actively requiring NSW residents to provide proof of vaccination to police comes amid ongoing reports of shockingly heavy-handed police enforcement of COVID protocols across Australia.

Images emerging from the protests have shown Australian police in tactical gear engaging aggressively with crowds and individual protesters.

In New South Wales, where lockdowns have also shut down shops, restaurants, and many of the basic freedoms of Australians, law enforcement authorities have strictly enforced the new health measures, arresting Australians for protesting the crushing restrictions.

In late July, as previously reported by LifeSite, a city-wide anti-lockdown protest in Sydney drew roughly 3,500 protesters, leading to a law enforcement crack-down on public rallies and a call for the assistance of private citizens.

“Yesterday cannot happen again,” NSW police minister David Elliot said in response to the protest, which resulted in dozens of arrests. “The deployments we saw yesterday are just a fraction of what are available.”

NSW police said they were gathering a “strike force” to identify anti-lockdown demonstrators.

Officials also warned NSW residents against engaging in conversation with neighbors, while police announced they would reward private citizens for reporting on their neighbors if they believed them to be violating the COVID measures.

By the end of July, Commissioner Fuller stated that the COVID-19 violation reporting hotline had received 15,000 complaints regarding the breaking of COVID restrictions.

However, some evidence suggests the administration overseeing the harsh COVID restrictions in the Australian state is being challenged in significant ways.

Last month an Australian lawyer filed suit against Health Minister Brad Hazzard and Chief Health Officer Dr. Kerry Chant, challenging “the legality and constitutionality of the NSW Government’s Public Health Orders in response to the COVID-19 pandemic, which are impacting millions of citizens.”

The case stated that “Minister Hazzard and Dr Chant have exceeded their delegated powers by civilly conscripting workers to taking a vaccine, which only has ‘provisional approval’ from the Therapeutic Goods Administration’,” adding, “We seek a declaration that the NSW Public Health Orders are invalid and of no effect.”

In a shock announcement Friday, NSW Premier Gladys Berejiklian resigned from her position amid news of a formal investigation into her past conduct by the Independent Commission Against Corruption (ICAC).

Berejiklian was forced to resign from Parliament and her electoral seat of Willoughby in North Sydney following a report from the commission that it was opening a formal investigation to discover whether Berejiklian had breached public trust.

“Resigning at this time is against every instinct in my being and something which I do not want to do,” stated Berejiklian, adding that her “only regret will be not to be able to finish the job to ensure the people of NSW transition to living freely with Covid.”

Emerging as the frontrunner to replace Berejiklian is Catholic pro-life and anti-lockdown Treasurer Dominic Perrottet, the second-highest ranking member of the New South Wales Liberal Party.