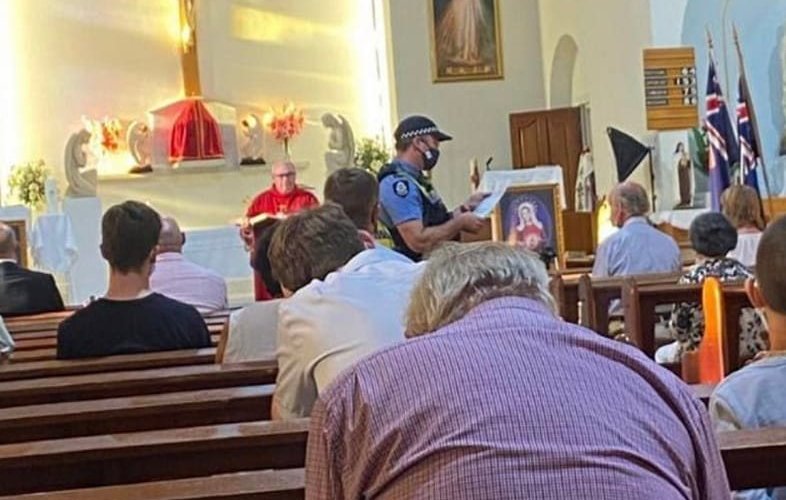 Police raid a Mass in Perth, Australia to check for mask compliance.Twitter

PERTH, Australia (LifeSiteNews) – Australian police interrupted a Catholic Mass on Thursday after reportedly receiving a tip that a number of churchgoers were not wearing masks.

“On Thursday evening, police responded to a report from a member of the public of people not wearing masks inside a church in Mount Hawthorn,” Western Australian (WA) Police told media outlet The West Australian.

A photograph of the incident shows a police officer checking mask exemptions in the front pew area of St. Bernadette’s Catholic Church in Mount Hawthorn, a suburb of Perth, according to Patrick Horneman, who posted the photo.

“Upon attendance, five people were spoken to by police and complied in wearing a mask. One person provided proof of an exemption,” the police said.

Matthew, a parishioner of St. Bernadette’s, said on Perth radio station 6PR “that the incident showed a ‘lack of trust,’” according to The West Australian.

“People are pretty taken aback by this. It’s pretty confronting and it’s pretty troubling really to see the liturgy that you love being stopped by police,” he said.

Libby Mettam, deputy leader of the Liberal Party of Western Australia, decried the police’s actions, telling The West Australian, “The McGowan Govt needs to explain how this type of state action is at all proportionate or necessary,” she said.

On Friday, the church’s social media page reportedly warned, “Heavy fines on the parish priest, our parish and individuals will be incurred if you are caught without wearing your mask.”

Archbishop Timothy Costelloe of Perth commented on the incident in a statement, saying, “It is highly regrettable that the police felt themselves obliged to intervene during a religious service in one of Perth’s Catholic parishes in order to enforce the mask-wearing mandate.”

“It is my hope that other ways can be found to deal with this delicate issue in the future and my office stands ready to cooperate with the police in this manner.”

Costelloe remained ambiguous, however, about whether he placed the burden of responsibility for the incident on the parishioners or on the police: “It is a matter of regret to me that the police were placed in a position which led them to take the action they did,” he said.

Indoor masking is legally required in indoor settings in several southwestern parts of Australia, including Perth, exempting children under 12 and those with a “physical or mental” condition “which makes wearing a face mask unsuitable.”

Indoor mask mandates were lifted January 7 in Perth and Peel, with the exception of certain “high risk” environments, before again being reinstated only about a week later on January 16. The reintroduction “follows three new cases of COVID-19 reported in WA,” according to the WA government website.

Of the two local cases, “It is believed both cases were infectious in the community and contact tracers are working with these cases to determine potential exposure sites,” the WA site continued.

Australia is notorious for enacting some of the harshest COVID measures, including mask mandates, in the world, and has drawn strong criticism for doing so.

Now, in addition, prominent voices have questioned the reasoning behind strict COVID regulations during the dominance of the omicron variant, due to admissions, including by the mainstream media and by the World Health Organization, that omicron will for the most part only cause mild illness.

For example, NPR reported that, according to a University of Washington study, “most of those who catch omicron won’t get sick or will only get mildly ill,” and “as a result, the rate of people getting hospitalized and dying from omicron will be much lower.”

“What we are seeing now is … the decoupling between the cases and the deaths,” WHO incident manager Abdi Mahamud told Geneva-based journalists in January.