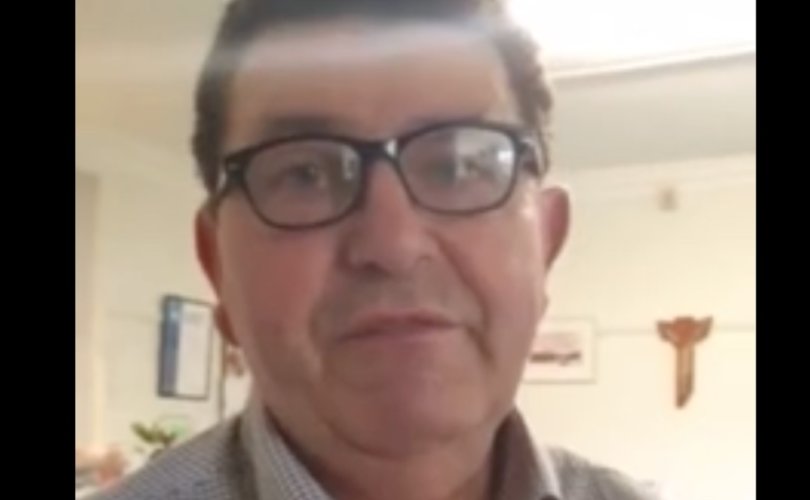 MELBOURNE, Australia, (LifeSiteNews) — Australian health officials have raided the clinic of an anti-lockdown doctor and seized some of his patients’ private medical files.

Dr. Hobart, a pro-life family physician with 30 years of experience, is a well-known critic of the Victorian government’s lockdown measures.

“Seven authorized officers from the Department of Health seized […] my confidential patient files, and my appointment book, and other various documents. They say they’re going to give me an itemized list of what they’ve taken, and it was quite an intimidating experience,” he told a supporter who filmed the raid.

At one point the health officials can be seen questioning the clinic staff about their vaccination status.

“[Dr. Hobart] has to supply proof [to me] that you’re double-vaxxed or that you’ve got an exemption,” says one of the “authorized officers” to a member of the clinic staff.

Another member of the staff is later heard complaining that the officers are taking confidential information from patients.

The officers are then seen leaving the clinic with the patients’ confidential files in their hands.

The video also shows a note displayed on the clinic’s front window, reading  “The Victorian  Government has banned patients from  entering this surgery  because Dr. Hobart refused to surrender your private and confidential patient  files.”

“I was told by these people that there’s no such thing as patient confidentiality under the new laws,” Hobart tells the videographer.

The physician also revealed that the health officials had issued him with a “prohibition notice” and said he “must cease trading,” which means that he won’t be able to charge patients a fee.

The video footage recorded during the incident was streamed live on Facebook. It has gone viral and to date has received over 786,000 views.

Hobart is known for speaking out against lockdown measures in Australia and warning of the risks posed by mRNA COVID vaccines, particularly to patients who have already contracted COVID-19.

In May 2021 he gave an interview to LifeSiteNews in which he detailed his efforts to discourage patients who have recovered from COVID from getting vaccinated.

“They should not receive the COVID vaccine due to health risks and because they are already immune and do not need it,” he wrote in a May 4, 2021 letter to Victoria’s Chief Medical Officer.

According to The Gateway Pundit, the Australian government has accused Hobart of “handing out fake COVID-19 vaccine exemptions” to people who were not eligible.

Hobart is not the only physician to be targeted for his stance. Only five days after the raid on Hobart’s clinic, a video emerged of another physician, Dr. Bruce Paix, a former senior doctor in the Australian military, being questioned by police about his views on the COVID jabs.

Initially the police said that they had come to Paix’s house in Adelaide, South Australia to perform a firearm check.

Then an officer revealed that he had come in relation to emails Paix sent to his local South Australia MP, Josh Teague, voicing his concerns about the COVID vaccines and vaccine mandates.

“These emails have come to the attention of the police […], attention … which you probably don’t need or don’t want,” the police officer told the physician.

Australia has made regular headlines this year for its totalitarian-like implementation of strict lockdown policies.

Australian police have been reported using violence and intimidation tactics against protesters or anyone suspected of not complying with the country’s harsh COVID measures, or of expressing dissenting opinions on COVID vaccines.

Dr. Bella d’Abrera, Director of Foundations of Western Civilization Program at the Institute of Public Affairs in Melbourne recently described Australia as “a police state.”