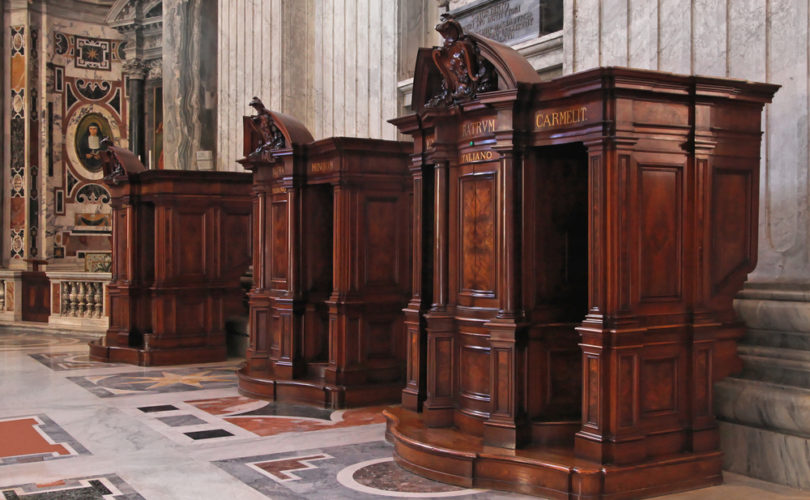 SYDNEY, June 18, 2018 (LifeSiteNews) – Catholic priests in Australia remain defiant after the passage of a new law requiring them to break the sacred seal of confession to report sexual abuse.

On June 7, the Legislative Assembly of the Australian Capital Territory (ACT) passed legislation, backed by every political party in the chamber, extending mandatory reporting of child abuse to churches and church activities, including the Catholic confessional, starting March 31 of next year. South Australia will begin enforcing a similar law in October.

The law creates a conflict with Roman Catholic priests’ religious duty to keep anything said during confession private, under penalty of automatic excommunication. Father Michael Whelan, the parish priest of Sydney’s St. Patrick's Church Hill, told the Australian Broadcasting Corporation he was “willing to go to jail” rather than follow the law, and he expects other priests will react the same way.

The Catholic Church is not above the law, he explained, but “when state tries to intervene on our religious freedom, undermine the essence of what it means to be a Catholic, we will resist.”

Whelan also expressed concern about enforcement, noting that due to the private nature of confession, the “only way” the government “would be able to see whether the law was being observed or not is to try and entrap priests.”

As for the concern over bringing pedophiles to justice, the priest added that if someone confessed to molesting a child, he would instead take it upon himself to “stop them immediately” by telling him, “Come with me now, we will go down to the police station in order for you to show that you are remorseful.”

“Priests feel strongly about this, and are prepared to go to jail for it. If the Australian state is so foolish as to want to make martyrs, then there will be plenty of candidates,” Father Alexander Lucie-Smith agreed, writing at the Catholic Herald.

He noted that the law would do little to actually uncover child abuse, as “no one who has abused anyone, or been tempted to do so, will ever dare to discuss the matter with a priest” under the new law. He also warned that it would be virtually impossible to prove or disprove a child abuser’s claim that he previously confessed to a silent priest, potentially landing priests in more unwarranted legal jeopardy.

Archbishop Denis Hart of Melbourne, president of the Australian Catholic Bishops Conference, also vowed to risk jail rather than comply with the law, back when it was first proposed last year.

Last week, Archbishop Christopher Prowse of Canberra and Goulburn added that the “common experience of pastors” is that “those who abuse children do not confess the crime,” and that even if they did there was no guarantee the priest would even see their face or learn their name, making it unlikely that the law would help find more offenders even if priests complied with it.

Practical objections aside, Lucie-Smith warned that the law interferes with a vital promise of the Catholic Church.

“Whoever you are, whatever your sins, you can approach a Catholic priest, and whatever you tell him will go no further,” Lucie-Smith explained. “Because even sinners have rights and deserve that assurance of confidentiality. It is one of the things that God guarantees them, and the State has no right to take that away from them.”