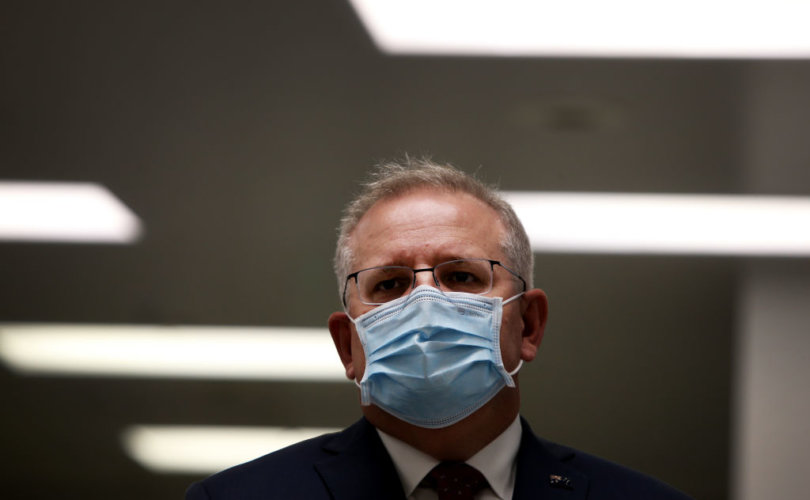 AUSTRALIA, August 19, 2020 (LifeSiteNews) – The Australian Prime Minister has said that he expects a coronavirus vaccine will be made “as mandatory as you can possibly make it.”

Scott Morrison, who has been Prime Minister since August 2018, has subsequently somewhat walked back the comments, saying that there will be “no compulsory vaccine but there will be a lot of encouragement and measures to get as high a rate of acceptance as usual.”

Morrison’s original comments were made during a 3AW radio interview.

Within 24 hours Australia’s senior politician had backtracked, saying in a subsequent radio interview on 2GB that “it is not going to be compulsory to have the vaccine, OK? It’s not compulsory. There are no compulsory vaccines in Australia.”

Morrison said that “there are no things that force people to do things,” adding that there will be “no compulsory vaccine, but there will be a lot of encouragement and measures to get as high a rate of acceptance as usual.”

When questioned by the interviewer, who said that he understood that Morrison had wanted to make the vaccine mandatory, the Prime Minister replied: “there are no mechanisms for compulsory, I mean we can’t hold someone down and make them take it.”

On Tuesday Morrison announced that the Australian government has made an agreement with British pharmaceutical company AstraZeneca to supply Australians with their coronavirus vaccine for free, providing that the vaccine passes clinical trials. AstraZeneca are using the HEK-293 cell line made from fetal cells harvested from an aborted baby decades ago in the production of their coronavirus vaccine.

LifeSiteNews has spoken with a number of Australians who are very concerned about the new coronavirus vaccine and their government's plans.

One Australian mother told LifeSiteNews that the sorts of “encouragements and measures” that will be used to get people to take the coronavirus vaccine are already in places for a host of other vaccines. While there are differences in the exact requirements in each state, as a matter of national policy children in Australia must “meet immunization requirements” in order for families to qualify for particular family tax benefits or assistance with child care fees. In the past 24 hours, Morrison has boasted of his role in creating this policy while promoting the coronavirus vaccine.

Among the various Australians interviewed by LifeSiteNews, John Mac, speaking from lockdown in the state of Victoria, detailed Morrison’s record as Social Services Minister.

“This is the guy who removed conscientious objection to medical treatment.  As a junior minister, he extended the government’s ‘no jab, no play’ into a ‘no pay’ policy by withdrawing essential support from parents who refused to immunize their children.  At this rate he’d have us believe that the government not only knows better, but cares more for our children than we do,” he said.

“For decades we’ve been told that nothing can come between a woman’s decision and her doctor, but after today’s announcement it seems that choice and medical autonomy aren’t so absolute after all.”

Dr. Rocco Loiacono, senior lecturer at the Curtin Law School in Western Australia, told LifeSiteNews that one major area of concern is that if a vaccine is made mandatory, or difficult to avoid taking, Australians, including many Australian Catholics, will not know whether it has been made using cell lines from aborted fetuses because the issue hasn’t received significant coverage by the Australian media.

“It appears from the evidence available that the major coronavirus vaccine candidate likely to be used in Australia is being produced using the cell lines of aborted fetuses,” Loiacono said.

“As far as I am aware that simply is not known widely in Australia at all. The only place that people would be able to find that out is by going to LifeSiteNews.”

Loicono said that, as far as he is aware, no Catholic news service in Australia has reported on Bishop Joseph Strickland’s comments that Catholics should “reject any vaccine that is developed using aborted children.” Nor, to his knowledge, has mainstream Australian Catholic media covered the fact that coronavirus vaccines that are likely to be promoted in Australia have been created using cell lines from aborted fetuses.

“Further, many Australian politicians, including senior government ministers, have commented disparagingly on religious objections to vaccinations, stating that they can see no basis for them. This is also concerning,” Loiacono added.

In May, Home Affairs Minister Peter Dutton urged the NRL, the governing body for the professional rugby league in Australia, to adopt a “no jab, no play” policy after several players cited religious grounds for refusing a flu vaccine.

“We shouldn't give any credibility to people that preach what is a religion for some, for a small minority, because it's dangerous,” Dutton said.

In Melbourne, Australia’s second-biggest city, police now have the power to enter private homes without a warrant or permission to carry out “spot checks,” as part of a new state-wide lockdown regime after politicians declared a “state of disaster” in response to an alleged rise in coronavirus associated deaths and positive test results.