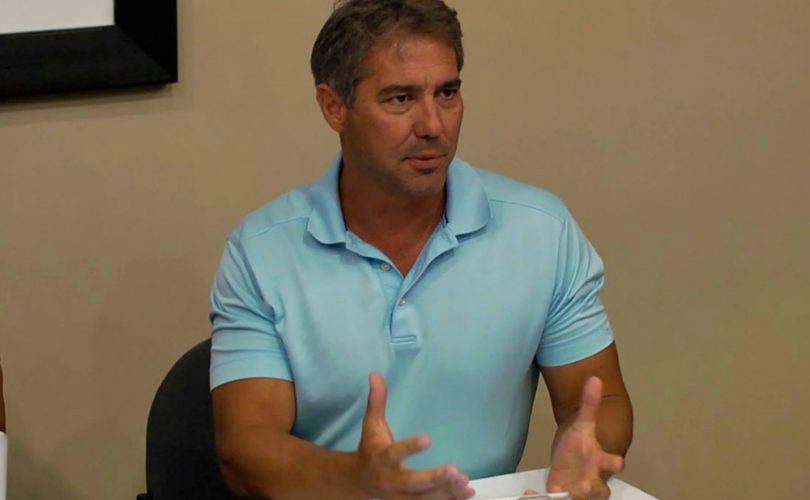 Troy Newman, a founding board member of the Center for Medical Progress, whose undercover work exposed Planned Parenthood's selling of babies' body parts.

MELBOURNE, September 30, 2015 (LifeSiteNews) — Australian pro-life leaders have reacted with shock and dismay over the sudden cancellation of a visa for Operation Rescue's Troy Newman to visit Australia as part of a speaking tour for Right To Life Australia.

Newman's visa was issued two months ago yet was withdrawn without notice while he was in transit within the United States prior to catching his international flight to Australia.  His tickets were confirmed for all flights through to Melbourne, indicating that his visa was valid when he had commenced his journey.

Newman, an American citizen travelling domestically within the United States then had the surreal experience of being “pulled off a plane” at Denver airport due to a decision by the Australian government.

RED ALERT!!! The Australian government has revoked my visa in midflight. I was pulled off a plane in Denver and told I could not travel to Los Angeles. And then on to Melbourne Australia. I am scheduled to speak on Friday at Right to Life of Australia's main convention in Melbourne. It is clear that the pro-abortion crowd does not want anyone to hear the truth about Planned Parenthood's illegal actions. Please pray for me I'm stuck in Denver airport like a man without a country. Please share this video and make it go viral.

Reports in the Australian media have stated that he had “called for doctors who perform terminations to be executed for murder” but this is not true according to Cheryl Sullenger, senior policy advisor at Operation Rescue.

“Troy Newman has never advocated violence and has always encouraged peaceful means to promote the pro-life message and effect change. He has worked for years to document abuses within the abortion industry and use that documentation to support complaints to law enforcement and oversight agencies, who we work with to help bring those violating the law to justice,” she said. “We have found this to be extremely effective. Troy and Operation Rescue were the first to denounce the murder of George Tiller that was committed by an unstable man that was barely known to us, except for his calls requesting times of court hearings as many people did during Tiller's criminal trial in Wichita, Kansas.  Troy Newman has always stood firm his commitment to peaceful activism to stop abortion through legal means.”

Right to Life Australia president Margaret Tighe has also told Immigration Minister the Hon. Peter Dutton, “Mr Newman is not a convicted criminal – rather a father of six adopted children who is on record as stating his opposition to the use of violence by those who oppose abortion.”

She also noted in her letter that those seeking to prevent his entry to Australia are members of Emily's List, an unofficial women-only faction of the Labor Party who are dedicated to making abortion available at any stage of pregnancy and for any reason.

Terri Butler MP had written to the minister accusing Newman of being an “anti-choice extremist” who would “campaign against Australian women’s reproductive rights and proposed laws to create a ‘buffer zone’ around medical clinics.”  She also accused him of comparing women who seek terminations to murderers.  In her opinion his presence in Australia “will cause significant harm to our community” and possibly lead to “threats or the commission of acts of violence against women and medical professionals.”

RTLA secretary Mary Collier was immediately in communication with the minister's office where a representative initially told her that Newman needed to have his visa finalised prior to making plans.  She then phoned Newman who was sitting in the airport lounge at Denver, and confirmed that he had received his multi-entry visa two months ago, and it was valid until August 2016.

Upon contacting Dutton's office again, she was incredulous as she was told by the receptionist that they were all at lunch and nobody could help her.  Collier was then told categorically that the minister didn't have anything to do with cancelling the visa.  Collier immediately forwarded a copy of Newman's visa as proof that it had been granted as well as a copy of the video of him being refused further boarding at Denver.  She also confirmed that there had been no notification received by Newman of the visa being withdrawn.

She was soon contacted by SBS and other media outlets who had received notification from the minister's office “an hour earlier at the least” that the visa had been cancelled by the minister.  It was only late afternoon that RTLA finally received an official response.

LifeSiteNews contacted the minister's office and was supplied a statement on behalf of the minister saying, “I can confirm that my Department has cancelled the visa for Mr Troy Newman under Section 128 of the Migration Act.  Mr Newman can appeal for a revocation of this decision and no further comment will be made during this appeal period.”

RTLA are continuing to work on having the visa issue resolved, and are grateful for the spontaneous outpouring of support from the greater pro-life community around the world.

“Throughout the day we were constantly receiving phone calls of support from interstate and international groups, as well as many Australians who have voiced their concerns to their state and federal members of parliament and have even spontaneously started petitions of support.  Groups that we wouldn't normally expect to hear from have also called with messages of support.  Even regular members of the public have  found it to be appalling, and have started asking why their tax money is being used to support for-profit abortion providers.”

Victorian MP and Match For The Babies organizer Bernie Finn condemned the decision to withdraw the visa, saying, “I'm starting to think Canberra has gone mad.  Troy Newman poses no threat to anyone in Australia.  I have the highest regard for (Immigration minister) Peter Dutton but on this call is very, very wrong.  It is, at best, a full frontal attack on freedom of speech.  It's a mighty sad day when wanting to protect babies disqualifies someone from entry to Australia.”

The topic of visa rejections has been in the Australian media of late as part of a campaign to prevent rapper Chris Brown from entering due to his history of domestic violence.