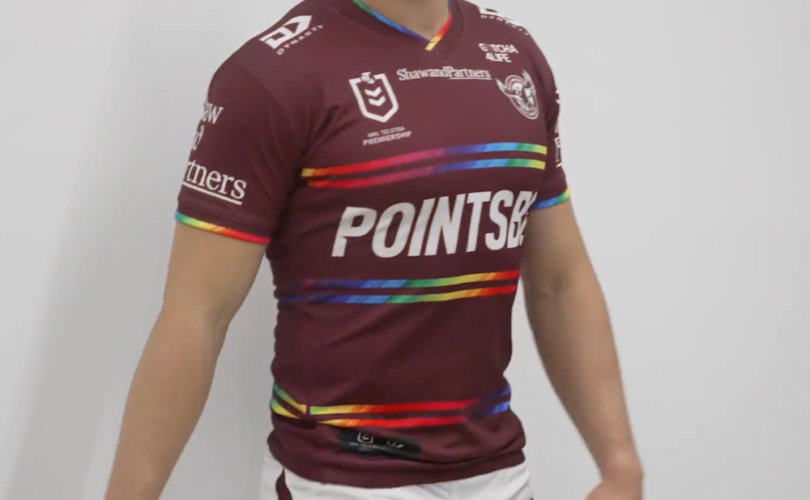 SYDNEY (LifeSiteNews) – Seven players from a Sydney-based rugby team told the team coach that they would not participate in a recent game since the team’s new jersey incorporated the LGBT flag.

Hasler told reporters Tuesday that he respects the players’ decision not to play. “The players will not play on Thursday and we accept their decision,” Hasler said. “These young men are strong in their beliefs and convictions and we will give them the space and support they require.”

Hasler also stated that the announcement of the jersey was executed poorly, calling it a “significant mistake.”

According to Hassler, neither the team nor the team’s stakeholders were consulted about the jersey until the Sea Eagles announced it to the media Monday as part of its Everybody in League initiative.

Peter V’landys, chairman of the Australian Rugby League Commission, told reporters that while he also respects the players’ choice, he still desires to push inclusion in the sport. “One thing I take pride in with rugby league is we treat everyone the same,” V’landys said. “It doesn’t matter your color, sexual orientation or race. We’re all equal.”

“We’ll never take a backward step in having our sport inclusive. But at the same time we will not disrespect our players’ freedoms,” he added.

National Rugby League (NRL) regulations dictate that all players wear matching uniforms, preventing the players from wearing alternate jerseys for the match against the Roosters. Manly was the only team that announced that it would use a pride-themed jersey this year, the Associated Press reported.

Following their announcement, the players have been subject to criticism online, being branded as bigoted and homophobic.

Dynasty Sport, the jersey’s designer, sold out of men’s and women’s sizes within a day of the announcement. A statement made Monday by the Sea Eagles stated that the two companies desired to use a pride-themed jersey for years.

“The ‘Everyone in League’ Jersey is something we’ve wanted to do for a number of years now,” said Dynasty Sport founder and director Tyler Rakich. “As soon as we got the concept locked in, all parties have contributed to make it what it is and it’s something we’re all really proud of.”

A similar incident occurred last month in the United States. The Tampa Bay Rays announced early last month that players would use pride-themed jerseys for “Pride Night,” yet five pitchers refused to play in protest, citing their Christian faith. The pitchers were subsequently labeled as bigots by a reporter on ESPN.