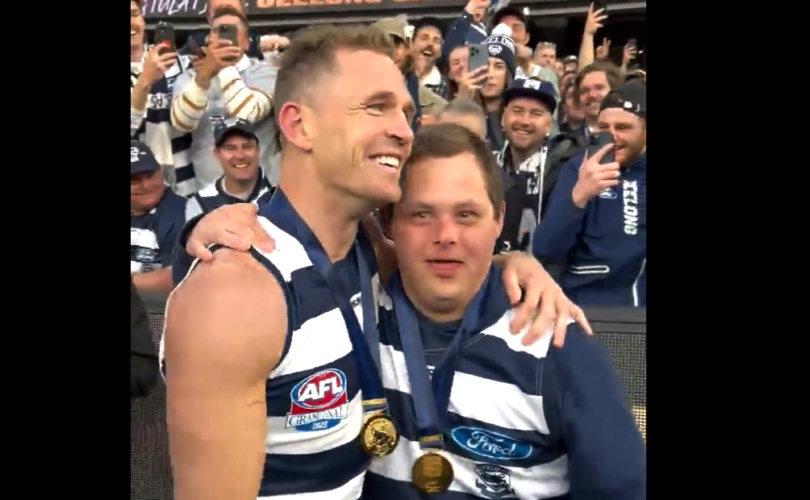 (LifeSiteNews) — An Australian football player warmed countless hearts this past weekend during the Australian Football League’s grand final when he honored the dignity of every human life.

Joel Selwood, a member of the Geelong Football Club who plays for the Geelong Cats, paid tribute to a young boy with a degenerative disease and also the team’s water boy with Down syndrome during the final game of the season.

Selwood’s first gesture was to carry young Levi, the son of retired Geelong Football Club player Gary Ablett Jr. onto the field, running with him through the banner at the beginning of the game.

“[It’s] Gaz’s turn to cheer on his little son,” Selwood said. “I think it’s only fair that an Ablett is performing on grand final day.”

The gesture allowed young Levi, who has a rare degenerative disease that leaves him unable to speak and who is likely to die at an early age, to follow in his father’s footsteps and allow his family to see their son carry on his father’s legacy.

“We have to say a massive thank you to both the @geelongcats and @joelselwood14 for making Levi light up the MCG yesterday,” said Levi’s mother, Jordon, on Instagram. “This is a moment that our family and extended family will cherish forever. Levi being ‘one of the boys’ on GF day with a 100,000+ crowd roaring. It was just magic!”

When the Cats won, instead of celebrating only with teammates, Selwood ran to the stands to help Sam Moorfoot, an individual with Down syndrome who serves as the team’s water boy during practices, onto the field to celebrate with the team.

“In Australia, this football team just won the league championship. Their captain went into the stands to get their waterboy, who has Down’s Syndrome, so they could celebrate together,” tweeted Goodable on Saturday night. “#Humanity.”

In Australia, this football team just won the league championship.

Their captain went into the stands to get their waterboy, who has Down’s Syndrome, so they could celebrate together.#Humanity 🌏 🇦🇺pic.twitter.com/beQuezPNan

In a time when children with Down syndrome or other health problems are considered prime candidates for abortion, Selwood’s actions speak volumes about the value that every human being brings to society and are a tribute to the pro-life message that every life has dignity and is deserving of respect.

Globally, the respect for the lives of children with liabilities is not much better. In March, LifeSiteNews reported on the World Health Organization’s tweet that listed Down syndrome as a preventable birth defect.

This announcement was met with backlash, with parents of Down syndrome children calling out the WHO for insinuating their children might be less than human.

“Why do we financially support discredited, China-run #WHO,” tweeted News host Rachel Campos-Duffy, a mother of nine children, including one with Down syndrome. “Down Syndrome is NOT a birth defect. It’s a chromosomal variation. My baby w/ Downs is as human & valuable as any of my other kids. These comments lead to discrimination & abortion. Celebrate, don’t eliminate differences.”

LifeSiteNews also shared the experience of Joel Kurtinitis, who told the story of how abortion was continually promoted to his family when the doctors diagnosed their unborn son with Trisomy-18.

“To the medical staff, our son was already dead, and our choice not to abort him was just an unnecessary headache and expense for everyone involved,” Kurtinitis wrote. “As soon as our son was diagnosed with Trisomy, he ceased being a baby boy and became a statistic to them. It felt like they calculated the likelihood of his death either in utero or shortly after birth, and decided that his life was now less important than the relative inconvenience of keeping him alive.”

Children in such cases do not lose their humanity but still deserve the respect due to every human being. As Kurtinitis said, “Our son deserves the best care we can give, even if he is going to die.”