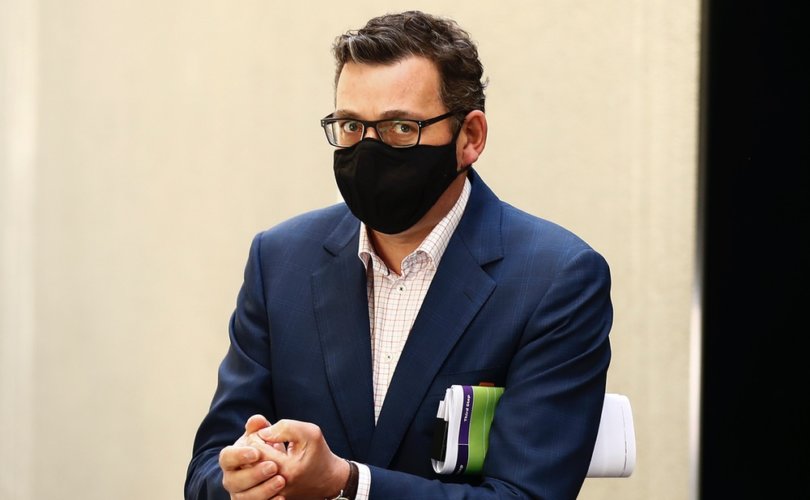 MELBOURNE, Victoria, Australia (LifeSiteNews) – The leader of the southeastern state of Victoria in Australia warned unvaccinated people that they will be locked out of society under his plans for eventually reopening the economy.

In common with political leaders around the world, Victoria Premier Daniel Andrews insists that receiving one of the experimental jabs is essential for “safety,” ignoring the fact that thousands of people worldwide have died or suffered other serious side effects after receiving one of the shots.

Andrews told a press conference last week that Victoria, with Melbourne as its capital, will move from a state of lockdown to “lockouts” for those who refuse to get jabbed.

“We’re going to move from a system where we’ve got everyone locked down to a situation where, to protect the health system, we’re going to lock out people who are not vaccinated and can be,” he said.

THEY ARE GOING TO REJECT MEDICAL CARE. pic.twitter.com/QpkIWMA4Ff

— Rage Against The Philanthropist (@swamstompr) September 5, 2021

“ … [A]s this becomes absolutely a pandemic of the unvaccinated, and we open everything up, it’s not going to be safe for people who are not vaccinated to be roaming around the place spreading the virus.

Coronavirus vaccine trials have never produced evidence that the vaccines stop infection or transmission. They do not even claim to reduce hospitalization, but the measurement of success is in preventing severe symptoms of COVID-19 disease.

As COVID cases have surged in heavily vaccinated countries like Israel, the U.K. and the United States, including among vaccinated individuals, hopes that vaccination would prevent infection or halt transmission have dwindled.

On April 30, in the wake of more than 10,000 reports of positive COVID cases among the fully vaccinated in the United States, the Centers for Disease Control and Prevention (CDC) announced it would cease counting “breakthrough cases” unless the person is hospitalized or dies, leaving uncounted tens of thousands of vaccinated individuals transmitting virus as though they were not infected.

By August, the failure of vaccines to prevent spread of the virus that causes COVID-19 was clear when CDC director Rochelle Walensky reversed the agency’s mask guidance and told vaccinated individuals to keep wearing face coverings.

“Our vaccines are working exceptionally well. They continue to work well with Delta with regard to severe illness and death,” Walensky told CNN. “But what they can’t do anymore is prevent transmission.”

Nevertheless, Andrews made clear that there would be a “vaccinated economy” in Victoria, and that only the vaccinated would “get to participate in that.”

“But yes, there’s going to be a vaccinated economy and you get to participate in that if you are vaccinated,” he said.

“ … [W]e’re going to get to a point where everybody who can get vaccinated will have been offered the chance to do so, and we are not going to have a situation, well at least not in Victoria, where we lock the whole place down to protect people who won’t protect themselves.”

Andrews indicated to reporters that, at a minimum, unvaccinated people will not be allowed to enter pubs or cinemas in Victoria.

“The greatest incentive is freedom,” he explained.

Victoria’s neighboring state of South Australia recently made headlines after The Atlantic magazine revealed authorities there are testing a new app that would force those quarantining to share on-demand photos and geolocation confirmation with the government.

Australia’s Covid-19 restrictions have been among the most draconian of anywhere in the world to date, with curfews, lockdowns, interstate travel bans, mandatory hotel quarantines and outdoor masking requirements all imposed in various parts of the country.

Skepticism about the experimental jabs has remained high in Australia despite the numerous threats to personal liberties being levelled against citizens by senior politicians.

The push to vaccinate the majority of the world’s population in order to prevent serious disease for those who are not at risk to begin with – the CDC reports an infection survival rate of greater than 99.95% for those under age 50 — adds to the skepticism surrounding the experimental jabs. Meanwhile, the list of FDA-recognized adverse events have grown from severe anaphylactic reactions to include fatal thrombotic events, the inflammatory heart condition myocarditis, and neurologically disabling disease like Guillain Barré Syndrome, as well as thousands of recorded deaths and permanent disabilities.

As of September 5, only 31 percent of Australians were recorded as “fully vaccinated” against COVID-19, with just over 50 percent having received a first dose of one of the experimental jabs.