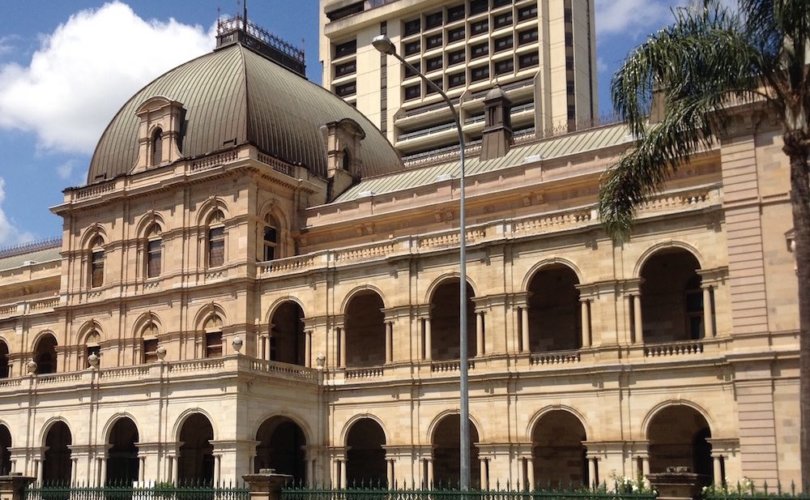 BRISBANE, Queensland, October 19, 2018 (LifeSiteNews) – The Legislative Assembly of the Australian state of Queensland voted 50-41 to legalize abortion Wednesday, tearing down a legal protection that’s been on the books for more than a century.

Under the 1899 law, “unlawful” abortion was punishable by up to seven years for women and up to fourteen for abortionists. Before this week’s vote, babies could only be aborted for risks to a mother’s physical and/or mental health, or if minors obtain the courts’ permission.

Wednesday’s vote removes abortion from the criminal code and lets women abort “on request” up to the 22nd week, the Brisbane Times reports, provided they obtain the consent of two physicians. Doctors who object on conscience grounds will be required to refer them to another willing doctor.

“To prioritise the rights of a fetus above that of a woman is something that I find offensive,” Deputy Premier Jackie Trad declared. “In this day and age, I think that is something that doesn't belong in our society — it's something that is familiar to me from The Handmaid's Tale, rather than Queensland legislation in the 21st century.”

KAP member Nick Dametto opposed the bill, relaying a story about how his now-wife became pregnant with their first child as a high school student.

“It would have been easier to abort — no one would ever have known,” he said. But “it would have changed our lives and we would be in a completely different place today,” and he wouldn’t have been able to live with the “killing of our unborn son or daughter” on his conscience.

“To me, this is nothing short of murder,” said another opponent, Dale Last, who raised the possibility of sex-selection abortions or abortions for economic convenience.

“I could not be more disappointed that three of our MPs voted in the Parliament on Wednesday night in a way that was contrary to long-established LNP policy and values,” he told the Brisbane Courier-Mail. A move to block the three from being re-endorsed is expected to happen at next month’s LNP state council meeting.

Abortion laws vary among Australia’s states and territories, with abortion for any reason offered as late as 24 weeks in Victoria, though most jurisdictions limit it to some sort of ostensibly-medical purpose.