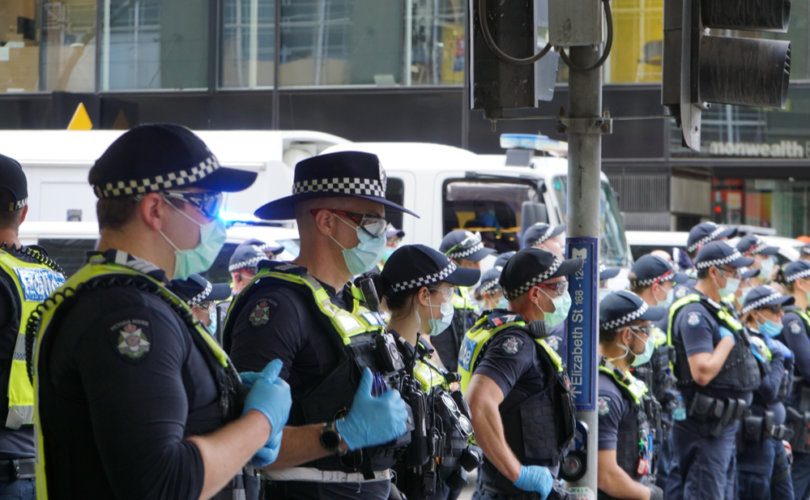 (LifeSiteNews) — A group of freedom activists in Australia is pleading for support from the international community to put pressure on Australian leaders to lift the punitive measures imposed on them since the onset of the coronavirus crisis.

Following more than 18 months of COVID-related lockdowns throughout Australia, with harsh enforcement policies, including the use of rubber bullets and widespread arrests by the police, Reignite Democracy Australia (RDA) — a pro-freedom group based in Victoria — is begging international leaders to back a campaign to pressure the government into relaxing COVID restrictions by offering asylum to Australians who have been affected by the devastating impositions.

Branded “SOS from Australia,” the initiative to protest on behalf of locked-down Australians was launched by Monica Smit, the founder of Reignite Democracy Australia.

“Once known as one of the safest and freest countries in the world … a land of privacy rights, medical rights, freedom of speech, freedom of movement, freedom to protest, freedom to worship … the Australia we once knew is no more,” Smit said as part of an impassioned plea for aid. “It is now a land of division, blackmail, coercion, discrimination and medical apartheid.”

Smit declared that, for fear of losing their licenses, “doctors and nurses cannot speak,” and noted that some people have “lost their jobs because they don’t want the [COVID] injection.”

“Our human rights are gone,” she lamented.

As a result of the punishing impositions laid on Australians’ shoulders, Smit stated that the country “can no longer fight for itself.” “We have been silenced, assaulted, blackmailed, and psychologically damaged … we are a broken nation.”

Accordingly, RDA is organizing an event on December 4 to rally “politicians, international leaders and all concerned citizens” into action, for their part requesting that the Australian government cease lockdowns and halt any mandatory “vaccination” plans.

In addition, the group has requested foreign leaders to issue a public statement that their nation “no longer considers it safe for their citizens to remain in Australia” and also to extend “an offer of asylum to a certain number of Australians who do not feel safe to remain in their home country.”

RDA is also asking that anyone else who supports their cause to protest outside Australian embassies and consulates in their locale on December 4 at midday, displaying signs that show solidarity with the Australian people.

A press release for the planned protest describes Australia’s draconian measures as having “robbed” Australians of their “fundamental rights and freedoms – all enforced with extreme aggression by the Police Force.”

“It looks and feels like we’re living in a ‘Police State,’” Smit wrote, warning that “Australia is ‘ground zero’” and that failure to resolutely resist now could see the exportation of such tyranny overseas.

Smit re-emphasized the extent to which once-ordinary freedoms have been swept away in the wake of lockdown restrictions, including basic rights like “the right to make personal medical choices … the right to medical privacy” regarding the abortion-tainted COVID jabs, and “the right to work without being subject to coercion.”

The weight of these impositions, Smit wrote, has forced businesses to shut down, and turned peaceful protests against the restrictions into “battlefields,” where the authorities “no longer work to protect the people,” instead brutally enforcing “the ever-changing directives handed down from the government.”

Smit has been a consistent voice of opposition to the totalitarian measures being imposed by the Australian government on both the federal and state levels, drawing the admiration of everyday Australians as well as the ire of the authorities.

She has organized numerous protests to mobilize Australians to stand up for their rights against a government which has all but obliterated citizens’ civil liberties since March of last year, successfully putting together 40 protests in Victoria alone in August.

So effective has her rallying proved that Smit was arrested on August 31 on hyped charges of “incitement,” apparently owing to violence breaking out between protestors and police at an RDA rally. After three weeks behind bars, Smit was released on September 22 when the Supreme Court of Victoria “was unable to make a connection between Smit’s advocacy for ‘freedom’ and isolated acts of violence within the protest.”

Other anti-lockdown activists have not been able to escape the full force of the COVID rules, with 29-year-old Anthony Khallouf bringing the fury of the Australian state for organizing opposition to the regulations. Law enforcement prosecuted Khallouf for “breaches of public health orders” which include “travelling from Queensland to Sydney” and for his involvement in “planning an unauthorised protest” in August.

He now faces eight months imprisonment for his violations of the COVID rules.

Episodes of police brutality have also been noted in the midst of Australian lockdowns. An investigation into conduct is currently underway after a video circulated widely on social media in September showing police in Melbourne brutally assaulting a man by slamming his skull into the hard floor of a railway station.

A video of the incident captured the moment a man is calmly speaking with police officers when another officer approaches the man from behind and suddenly grabs his torso and flings him headfirst onto the tiles.

When Shane Patton said they won’t hesitate to use force

I think this was his vision 😬😬😬 pic.twitter.com/zpdLDa5ttL

Videos of protests in Melbourne also show police shooting citizens in the back as they peacefully demonstrate against the lockdowns.

In light of the continuing tyranny, Smit said, “We need your help to continue our fight. We need help from our international friends. We are seeking your support to apply political and economic pressure on our leaders to change the destructive path that we are on. This is an official SOS.”