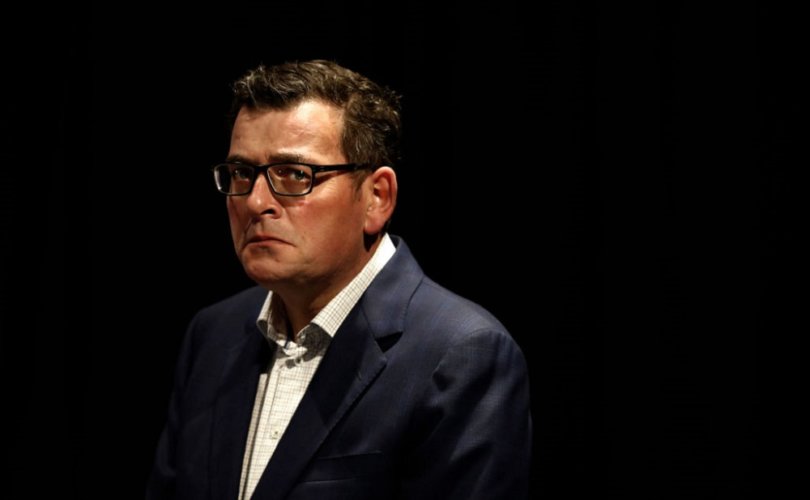 MELBOURNE, Australia (LifeSiteNews) –  An Australian political leader has submitted to Parliament two bills which could see people in the state of Victoria jailed for two years for breaking public health orders.

Since the start of the coronavirus crisis, the Australian state of Victoria has on various occasions imposed some of the most radical restrictions of freedoms anywhere in the world, including daily curfews and mandatory mask wearing in public.

These two bills, which are currently under deliberation in Parliament, will grant Andrews’ government the authority to impose $90,000 fines on individuals who “intentionally and recklessly” violate public health orders, and $455,000 for businesses. Additionally, law enforcement will be given the authority to imprison Australians who fail to comply with public health orders for up to two years.

If passed, the proposed Public Health And Wellbeing Amendment (Pandemic Management) Bill 2021, will empower the Victorian state government to “restrict movement, to require the use of face coverings, or to require persons to be subject to detention or quarantine requirements.”

The Pandemic Management bill’s stated purpose is to suppress “the most egregious pandemic-related behaviors” and “body corporate entities [businesses] from non-compliance” with heavy penalties when actions are determined to be “likely to cause a serious risk to the health of another individual.”

The  “egregious” behaviors that could lead to fines and imprisonment include “a person deliberately breaching a quarantine or detention requirement or knowing they are COVID-19 positive, deliberately facilitating or engaging in events that have the potential to result in serious risks to health such as large gatherings [like protests]; or a business deliberately trading or offering services in breach of an order.”

The Pandemic Management bill also contains the explicit provision that Victorian State Premier Dan Andrews will be “responsible for making a pandemic declaration,” and provide “a broad power to make pandemic orders” to Ministers of Health, operating independent of the federal government.

In addition to the Pandemic Management bill, Andrews has also submitted the Emergency Powers Safeguards Legislation Amendment Bill 2021 to Parliament, which is intended to replace the existing state of emergency framework due to expire on December 15th.

If approved by Parliament, this bill would grant Dan Andrew’s state government the authority to limit the movement of the population, ban social or religious gatherings, shut down businesses, and enforce quarantines.

Chrisopher Blanden QC, President of the Victorian Bar, revealed that Andrews’ pandemic legislation was “appalling” and “lacks the appropriate checks and balances to ensure the proper exercise of these powers.” Blanden added that the proposed legislation “contains many other problematic provisions, including conferring very broad power on authorized officers without effective review or oversight, gathering police power to enter premises without a warrant, and abrogating privilege against self-incrimination.”

In an impassioned speech in Parliament, Ryan Smith MP denounced Andews’ legislation as a “draconian” power grab, vowing that he and other MPs would fight to defend freedom and democracy on behalf of the people of Victoria.

Smith began addressing the grievances of Victorians who had only just been released from almost 250 days of lockdowns that caused irreparable harm to families and businesses.

“They were told last week there would be no more lockdowns and, one week later, [here is] legislation that gives [the state government] draconian, unfettered, unshackled power to do it all over again.” Smith said.

“Well, I say to Victorians… the Liberal Party and the National Party will not stand for this. We will oppose this every step of the way, in this place [the Parliament]… and out on the streets!”

In an allusion to  Victorians’ disdain for their Premier,  Smith said that Andrews should leave his guarded headquarters and head into the streets of Melbourne to receive a free “character assessment.”

Beware of any politician who wants more power

Beware of any politician who suppresses dissent

Beware of any politician who imposes Police State

Beware of any politician who divides society

Victorian Premier Dan Andrew’s handling of COVID has gained international notoriety, particularly due to his willingness to use unprecedented, authoritarian tactics to force compliance with public health orders. This includes mandatory vaccinations as a condition of employment and other essential freedoms, such as visiting family members, exercising or attending places of worship.