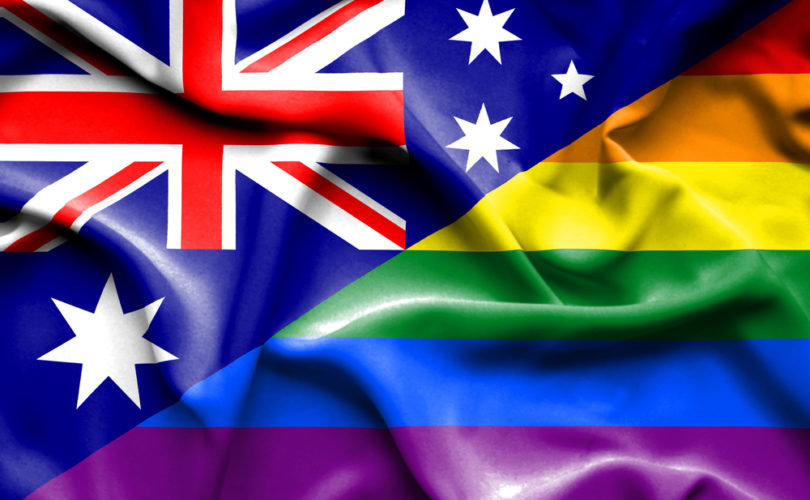 MELBOURNE, Australia, November 15, 2017 (LifeSiteNews) — One of the last remaining English-speaking nations to hold out for traditional wedlock is now moving toward legalizing same-sex “marriage.”

The results of a country-wide postal survey were announced today and a majority of Australians favor government-sanctioned homosexual “marriage.”

Homosexual activists took to the streets to cheer the announcement. Pro-marriage and family advocates accepted the inevitable but warned that individual freedoms need to be protected in any future legislation.

“From the outset, it has often seemed a David and Goliath struggle with politicians, corporates, celebrities, journalists, professional and sporting organizations drowning out the voices of ordinary Australians and pressuring everyone to vote Yes,” stated “deeply disappointed” Catholic Archbishop Anthony Fisher of Sydney.

Prime Minister Malcolm Turnbull, a strong supporter of same-sex “marriage,” praised the result. “They voted ‘yes’ for love,” he said in a social media video. “And now it is up to us here in the Parliament to get on with it.”

Turnbull promised marriage redefinition legislation by Christmas. Parliamentarians anticipate starting the process of hammering out a new law this week.

The people of Australia have spoken and I intend to make their wish the law of the land by Christmas. This is an overwhelming call for marriage equality. pic.twitter.com/PWZbH5H71r

Threats of violence, dirty politics and ugly campaigning marred the non-binding public survey, which began in October. Homicidal messages of hate against Christians or anyone who dared vote “No” were sprayed on churches.

Concerns were also expressed about voter fraud. A referendum form was mailed to every registered voter in the nation and those who didn’t use it — by forgetting or by mistake or for any reason — could easily have had it filled out and sent in by anyone in the country.

Archbishop Fisher said he was “heartened” that with overwhelming “Yes” campaign pressure so many voted for traditional marriage. “What’s remarkable is how many stuck to their guns and voted No or abstained,” he wrote, pointing out that “only 48 percent of eligible voters voted Yes to redefining marriage in law.”

In August, Catholic bishops urged the faithful to vote against legalizing homosexuality.  Fisher, who characterized traditional man/woman unions as “real marriage,” now predicts that legislation will “further deconstruct marriage and family in Australia.”

The archbishop called for the freedom to disagree to be respected in law. “It is time now to come together as a nation, renew our friendships with those who think differently to us, and ensure that respect for different beliefs is clearly enshrined in our laws and customs.”

“Lame proposals to protect ministers of religion and places of worship offer no protection to the 99.9 percent of religious believers who are not clergy,” Fisher exhorted. “It is imperative that our political leaders enact laws that protect the rights of all, religious believers included … We must not trade off existing rights to religious belief and expression.”

Dr. Glenn Davies, Anglican Archbishop of Sydney, said he accepts the fact that the country is moving toward same-sex “marriage,” but expressed concerns that approval of homosexuality is not coerced.

“The Parliament needs to recognize that more than one in three Australians are opposed to this change,” Davies noted in a recorded video message. “Therefore, protecting individual freedoms — freedom of speech, freedom of conscience, and freedom of faith — need to be balanced with the move to address same-sex ‘marriage.’”

Davies called upon Christians to “generously, compassionately, and graciously engage with Australia” on moral issues facing society. “Where people consider God’s Word is not the authority, we must continue to witness to that authority in the way in which Jesus would do so: with love and grace but firmness and boldness and confidence in God’s Word for Australia today.”