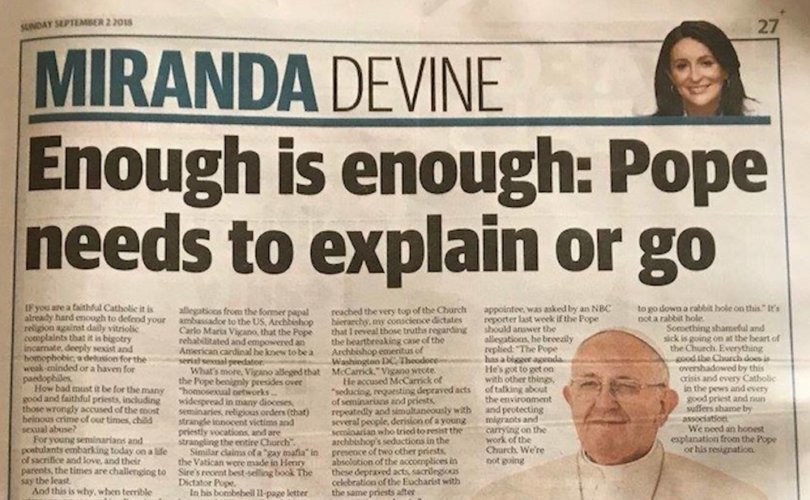 SYDNEY, Australia, September 5, 2018 (LifeSiteNews) – Australia’s Daily Telegraph has published an op-ed in which it is declared that Pope Francis must answer Archbishop Viganò’s allegations that the Pope covered-up for and promoted an abuser or he must resign.

“We need an honest explanation from the Pope or his resignation,” wrote Miranda Devine in her Sept. 1 column.

Devine said that it was “hard enough” to be a faithful Catholic defending one’s faith from “daily vitriolic complaints” without the Pope creating a new scandal by his silence.

“And this is why, when terrible crimes are uncovered in every part of the global Church–from the US to Chile, Honduras and Australia–and the Pope refuses to answer [allegations he promoted sex abuser Cardinal McCarrick],  his flock loses faith in his ability to lead us out of the darkness,” Devine stated.

The journalist compared a humble admission of wrongdoing from the Australian Bishops Conference in response to the nation’s Royal Commission into Institutional Responses to Child Sex Abuse to the pontiff’s reaction to revelations made by the former papal nuncio to the USA, Archbishop Carlo Maria Viganò.

Viganò released a statement on August 25 alleging that Pope Francis had removed sanctions from the now-disgraced Cardinal Theodore McCarrick and returned him to a position of great influence in the Church, despite knowing of his sexual misconduct with seminarians and young priests. In June the Archdiocese of New York revealed that a “credible” allegation of sexual abuse of a minor had been made against the Archbishop Emeritus of Washington, DC.

“When asked last week about Vigano’s allegations, Pope Francis’s reply was devastatingly inadequate,” Devine wrote. “‘I will not say a single word on this.’ He still has not responded.”

Devine says that the media has let Pope Francis get away without answering such serious charges because of his “open embrace” of a “left-wing agenda.”

“As a media darling, the Pope gets away with such evasians because of his apparent nudge-nudge, wink-wink rejection of the social conservatism of his two predecessors and his open embrace of such left-wing agenda items as climate alarmism and open borders,” she wrote.

Speaking as a Catholic, Devine said that such silence was unacceptable.

“Something shameful and sick is going on at the heart of the Church,” she stated. “Everything good the Church does is overshadowed by this crisis, and every Catholic in the pews and every good priest and nun suffers shame by association.”

“We need an honest explanation from the Pope or his resignation.”