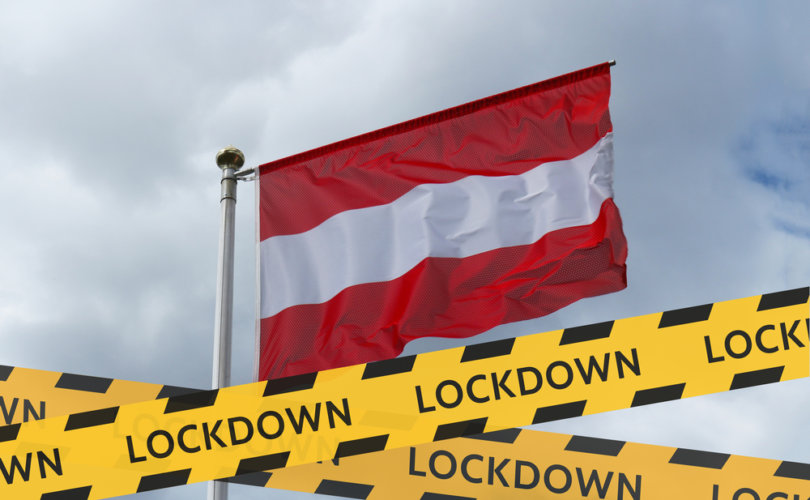 VIENNA, Austria (LifeSiteNews) — In a deliberately divisive lockdown strategy allegedly intended to reduce the spread of COVID-19, unvaccinated people aged 12 and up in Austria have been forbidden to leave their homes except to perform a handful of permitted activities, including grocery shopping and getting an experimental COVID-19 injection.

“It’s our job as the government of Austria to protect the people,” Austrian Chancellor Alexander Schallenberg said while speaking to reporters in Vienna on Sunday. “Therefore we decided that starting Monday … there will be a lockdown for the unvaccinated.”

Contrary to Austrian government claims, Simon Fraser University economics professor Douglas Allen, in an April study, reviewed over 80 research papers on lockdowns across the world and concluded that lockdowns saved 22,333 years’ worth of lost life but caused 6.3 million years of lost life, making the policy’s long-term harm 282 times worse than its benefits.

After taking effect at midnight, Austria’s new policy has put some 2 million of the nation’s 8.9 million residents under lockdown, the AP reported, formally segregating unvaccinated Austrians aged 12 and over from society.

The lockdown strategy positions Austria among the first countries in the world to impose a nationwide lockdown exclusively for unvaccinated people, and has been seen as a warning that other nations may begin implementing harsher segregation measures for those who refuse to comply with government vaccine mandates.

Austria, and large parts of Europe, have fallen into a dangerous period of authoritarianism. There is no scientific or moral justification. This isn’t about health, it’s about power and control.

“Two million people are being practically imprisoned without having done anything wrong,” said Herbert Kickl, the leader of Austria’s opposition Freedom Party in a statement.

Kickl, who has publicly stated he has not gotten the jab and has referred to the COVID-19 drugs as “a genetic engineering experiment,” added that he would fight the discriminatory lockdown policy using “all parliamentary and legal means we have available.”

The move by Austria to impose a stringent and discriminatory new lockdown, over a year and a half into the pandemic, comes in spite of the fact that studies have found lockdowns have broadly failed to reduce the spread of COVID-19 while causing far more harm than good.

Under the lockdown rules, unjabbed Austrians will be permitted to leave their homes for only a limited number of activities including working, grocery shopping, or getting an experimental COVID-19 inoculation, but will be fined for engaging in any activity not explicitly permitted.

The government has promised enforcement of the restrictions on an “unprecedented scale,” with the AP reporting that “police will go on patrol to check people outside to make sure they are vaccinated.”

Austrians caught violating the targeted lockdown could be subject to fines of up to 1,450 euros, the equivalent of roughly 1,660 American dollars.

According to Austrian Catholic activist Alexander Tschugguel, police initially said they would not enforce the mandates, only to agree to carry out the directives of the government just hours later.

A few days ago, the #austrian #police said that they will not help to enforce the new totalitarian rules. They said it’s not their job.
A few hours later they agreed to do it.
Dictatorship is already here!#resist #NoVaccineMandates pic.twitter.com/HyBZZj90nr

In his comments to reporters, Schallenberg cited “shamefully low” vaccination rates in Austria as the rationale for penalizing unvaccinated Austrians with a form of house arrest, despite the fact that some 65% of the country’s population is “fully vaccinated” according to data from the European Centre for Disease Prevention and Control, CNBC reported.

The government’s crackdown on unvaccinated Austrians also comes in spite of a low number of overall COVID-related deaths in the country.

An estimated 11,706 deaths with COVID-19 have been reported in Austria since the beginning of the pandemic out of a population of nearly 9 million. Meanwhile, the COVID-19 infection rates have reached their highest level since March 2020 with daily averages around 10,800, despite the fact that the majority of eligible Austrians have already gotten the experimental COVID-19 shots.

Austrian Health Minister Wolfgang Mückstein said the lockdown for the unvaccinated will last at least 10 days, after which time it will be evaluated.

It’s unclear whether the lockdown will be extended further after the evaluation period, or by what criteria the measure will be analyzed.

Meanwhile, Austria’s harsh and divisive lockdown policy has drawn the ire of many, including those who have compared the discriminatory rules to the brutal “show me your papers” authoritarianism of an Austria under Nazi control.

“You’d think Austria would know better … you know, after the whole [H]itler thing a few years ago,” tweeted out author and conservative commentator Tim Young.

You’d think Austria would know better… you know, after the whole hitler thing a few years ago

“A divided society (the jabbed Vs the jabbed-nots) in Austria as lockdown imposed on all unvaccinated people,” wrote prominent Brexit leader and Trump ally Nigel Farage in response to the news. “Dark times for freedom and liberty.”

A divided society (the jabbed Vs the jabbed-nots) in Austria as lockdown imposed on all unvaccinated people. Dark times for freedom and liberty.

“It is happening,” wrote Swedish journalist Peter Imanuelsen. “Austria has announced they will have a lockdown for the unvaccinated.”

“They will have police out on the streets checking peoples [sic] papers to see if their medical status allows them to be outside,” Imanuelsen continued. “Imagine telling someone this 1 year ago.”

Austria has announced they will have a lockdown for the unvaccinated.

They will have police out on the streets checking peoples papers to see if their medical status allows them to be outside.

Imagine telling someone this 1 year ago.

While videos shared on social media indicate massive crowds of Austrians took to the streets to demonstrate against the harsh measures over the weekend, Imanuelsen said mainstream media outlets have failed to cover the protests.

According to Imanuelsen, on November 14 “[t]housands of people have been out protesting for freedom in Austria tonight” just hours before the lockdown for unvaccinated Austrians was set to take effect at midnight.

“Why isn’t this on the news?” Imanuelsen asked.

Thousands of people have been out protesting for freedom in Austria tonight.

Why isn’t this on the news?

Austria’s move to punish unvaccinated citizens comes as the governments of many other countries, including Australia, New Zealand, Germany, Canada, and the United States, have moved to employing more and more punitive measures to coerce vaccinations.

The heavy-handed approach by government leaders to force vaccination has increasingly been paired with equally blunt messages from the leaders themselves.

In Germany, Chancellor Angela Merkel warned of “severe restrictions” coming for the unvaccinated, while in New Zealand, Prime Minister Jacinda Ardern admitted that her country’s vaccine passport scheme is designed to create a two-tiered society, reserving freedoms and privileges for those who obey the government’s jab mandate and punishing those who refuse to comply.

In the U.S., President Joe Biden drew a firestorm of outrage among conservatives when he told Americans that his plan to mandate the experimental COVID-19 shots for tens of millions of workers was “not about freedom or personal choice.”

Meanwhile, as previously indicated, studies conducted following the imposition of widespread lockdowns have indicated the measures have consistently caused catastrophically greater harm than good, in addition to depriving citizens of basic human rights and liberties.