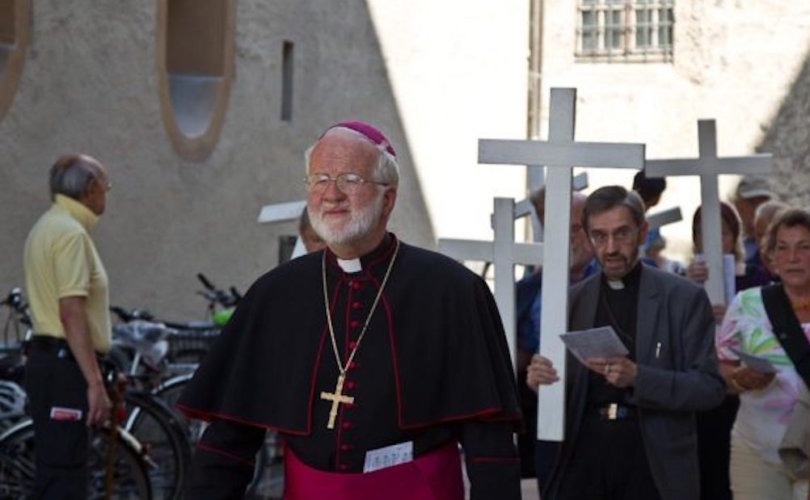 January 4, 2017 (LifeSiteNews) – Austrian Bishop Andreas Laun said in a new interview that he agrees with the concerns of the cardinals who signed the dubia asking the pope for moral clarity on Amoris Laetitia, putting him “in the best company.”

“I have read the concerns of the Four Cardinals, and I agree with them!” he told Dr. Maike Hickson of OnePeterFive. “Additionally, I know personally especially Cardinals Meisner and Caffarra and know how competent they are! With them, I am in the best company!”

The dubia is a formal request Cardinals Raymond Burke, Joachim Meisner, Walter Brandmüller and Carlo Caffarra sent to Pope Francis, asking him to clarify whether certain portions of his exhortation Amoris Laetitia are harmonious with Catholic moral teaching. Varying interpretations of Amoris Laetitia, as well as Pope Francis having given approval to an implementation of the document that allowed divorced and remarried Catholics to receive Holy Communion, have caused confusion. Some bishops have said Catholic sacramental discipline must remain as it always has; others have said Amoris Laetitia opens the door for unrepentant adulterers without a firm purpose of amendment to receive the Sacraments.

Laun said he would be willing to sign the dubia himself if he was asked, “after re-reading them, and perhaps also after consulting at least one of the cardinals.”

Laun, an Auxiliary Bishop of Salzburg, Austria, Professor of Moral Theology at the Philosophical-Theological Faculty of Heiligenkreuz, Austria, and an oblate of St. Francis de Sales, said that allowing the divorced and remarried Holy Communion would be like a doctor inadequately treating a patient.

“The spiritual guide whose importance Pope Francis so much emphasizes has the role of a physician who makes a diagnosis but who then does not also render a true service to the patient when he only glosses over this illness – as he would prefer to have it – even though he knows of the illness’ dangers,” said Laun. He said he cannot think of a way for remarried divorcees who aren't living as brother and sister to receive the Sacraments even though “I would like to name for them an easier path.”

“But it is all about truth and not about my feelings,” he said. “This objective question has nothing to do with mercy. Could St. John the Baptist have 'mercifully allowed' Herod to have his brother’s wife?”

The charitable conduct of the four cardinals is “a service to the teaching of the Church,” said Laun, responding to a question about the attacks the dubia signers have received.

Jesuit Father Antonio Spadaro, a close papal collaborator, accused Cardinals Raymond Burke, Joachim Meisner, Walter Brandmüller and Carlo Caffarra of trying to “ramp up” division and tension in the Church with the dubia. Spadaro said Pope Francis has already answered the questions of the dubia by approving guidelines issued by the bishops of Buenos Aires allowing Communion for the divorced and remarried.

Cardinals Renato Raffaele Martino, Cardinal Paul Josef Cordes, Bishop Athanasius Schneider, Bishop Jan Watroba, and Bishop Józef Wróbel have all publicly expressed their support for the dubia and/or the cardinals who sent it. Laun is the first Austrian bishop to lend his public support to the efforts of the four cardinals requesting clarity on whether Amoris Laetitia is compatible with Catholic moral teaching.

“In history, there are many examples of criticism also of a pope. However, it has to follow the 'morality of criticism': that is, to say it politely, objectively, justly, born in love, and with much understanding for the one who is to be criticized because each criticism also hurts more or less,” Laun explained.

Laun told Hickson that it would be “a certain shame if, out of fear,” other prelates didn't speak up in support of the dubia. He also reminded her, “The pope cannot lower or raise a moral standard – just as he cannot change a physical law. Moral laws are Divine Laws.”