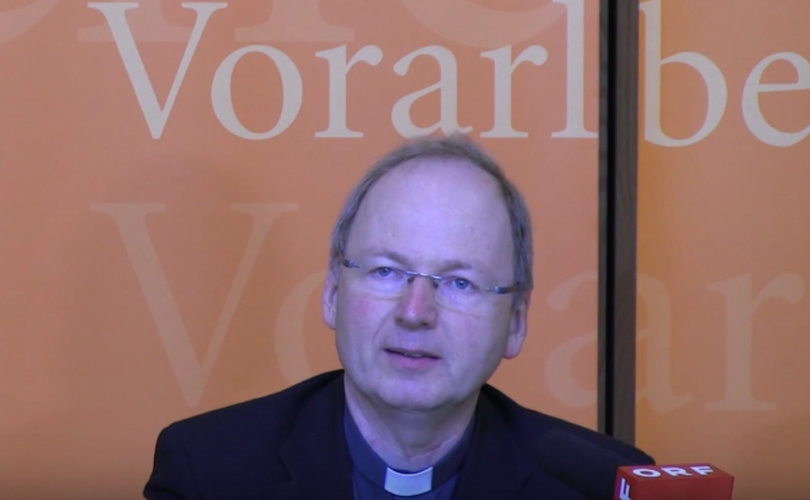 January 4, 2017 (LifeSiteNews) — An Austrian bishop has given a sweeping interview claiming that “remarried” Catholics now have the “blessing of the Pope” to receive Communion, the use of contraception is “a decision of conscience” for couples, and homosexuals can constitute a “family.”

Bishop Benno Elbs, who heads the Feldkirch diocese in west Austria, made the comments in an interview with Die Presse on December 23.

Regarding the admission of “remarried” divorced Catholics to Communion, he said, “The teaching [of the Church] has changed insofar as she has opened the door. People have made decisions of conscience in the past, but now they can do it – so to say – with the blessing of the Pope. That is an essential progress.”

Asked about the strongest tensions during the Synod for the Family in 2015 that presaged the release of the Pope Francis' apostolic exhortation Amoris Laetitia, Elbs responded that it involved remarried and divorced Catholics. “Another point of strong tension was how to deal with people of homosexual orientation,” he said.

During the Synod, the Church leaders in the German language circle had a huge influence on the discussion, Elbs said. While the group included Cardinal Gerhard Müller, prefect of the Congregation for the Doctrine of the Faith, it also included Cardinal Walter Kasper and was led by Cardinal Christoph Schönborn, the latter two being strong proponents of the “Kasper proposal” to admit divorced and remarried to Communion.

“We had unanimity in everything, and the Pope has taken up a lot,” Elbs said. “Thus the German language group has had a great influence.”

For Elbs, the entirety of Amoris Laetitia is about the decision of conscience: “If that is written in a footnote or not is not important. The whole paper breathes the spirit that the individual person can find a way in his conscience to deal with situations of life.”

He added that the admission to Communion of those in question is irreversible. “That has been in the pastoral praxis for quite some time. Even theologically. Now we should not make the mistake of inventing new rules. The progress is an attitude that surpasses norms.”

As to why the Synod did not allow artificial contraception, the bishop answered: “The Synod paper recommends natural methods of regulating conception. Recommends. The regulation of conception is a decision of conscience of the couple.”

With regard to homosexuals, Elbs was asked how he defined family. “Family is a place where people are raised, grow up, become strong, where they learn, what they need for life.” The reporter then asked: “Is this also true for homosexuals?” And the bishop responded: “Yes.”

Elbs authored the book in German, Where the Soul Learns to Breathe: A New Vision of Marriage and Family with Pope Francis, published in 2016.

The interview brings to light what many fear: that due to the obscurity and ambiguity in which Amoris Laetitia speaks of “borderline cases,” what will be set in place as normative for a moral choice is the conscience of the individual alone. Elbs leaves aside the Church's teaching, elaborated in Pope St. John Paul II's encyclical Veritatis Splendor, that the conscience can be malformed or ignorant and that the Church’s teaching is precisely the “compass” that guides the conscience in decision making.

The Catechism of the Catholic Church says in No. 1777: “Moral conscience present at the heart of the person, enjoins him at the appropriate moment to do good and to avoid evil. It also judges particular choices, approving those that are good and denouncing those that are evil. It bears witness to the authority of truth in reference to the supreme Good to which the human person is drawn, and it welcomes the commandments. When he listens to his conscience, the prudent man can hear God speaking.”