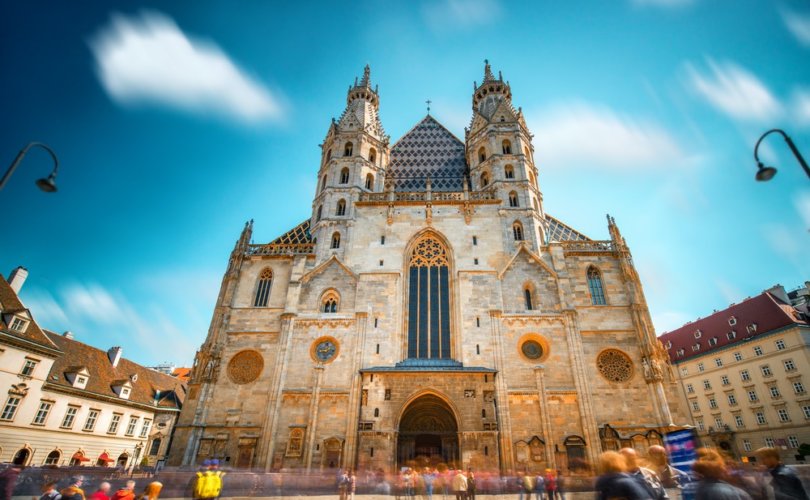 VIENNA, Austria, March 11, 2020 (LifeSiteNews) – Due to the coronavirus outbreak, dioceses across Austria have dispensed Catholics from fulfilling their Sunday Mass obligation, “should participation in Sunday services not be possible or advisable.”

The Austrian bishops said they intend to obey a government decree published on Tuesday, which prohibits events indoors, if more that 100 people are present. Similarly, only 500 people are allowed to congregate for events outdoors.

Accordingly, Mass attendance, especially on Sundays, is made almost impossible, since many parishes have congregations that are a lot larger.

While there is no joint statement of all the bishops, the individual decrees within the dioceses are very similar.

Cardinal Christoph Schönborn, the archbishop of Vienna, announced, “Within the archdiocese of Vienna we accept the guidelines of the federal government regarding the coronavirus preventative measures. They therefore apply to all forms of worship and church events.”

Parish priests, he added, have to ensure that the measures are implemented locally.

The Archdiocese of Vienna said Holy Communion should not be received on the tongue, but in the hand. Catholics in Austria are also told not to drink the consecrated wine from the chalice. The use of holy water and the practice of the sign of peace should also be avoided, the archdiocesan decree stated.

Bishop Athanasius Schneider, one of the world’s most outspoken defenders of Catholic orthodoxy and doctrine, has defended the reception of Communion on the tongue despite coronavirus fears.

According to the Code of Canon Law, Catholics are obliged to participate in Holy Mass on Sundays and on holy days of obligation, such as Christmas. “Moreover, they are to abstain from those works and affairs which hinder the worship to be rendered to God, the joy proper to the Lord’s day, or the suitable relaxation of mind and body.”

If it is not possible to attend Mass, “it is strongly recommended that the faithful … devote themselves to prayer for a suitable time alone, as a family, or, as the occasion permits, in groups of families.”

The Catechism of the Catholic Church further explains that Sunday Mass is “at the heart of the Church’s life,” it is “the foundation and confirmation of all Christian practice.”

“For this reason the faithful are obliged to participate in the Eucharist on days of obligation, unless excused for a serious reason (for example, illness, the care of infants) or dispensed by their own pastor. Those who deliberately fail in this obligation commit a grave sin,” the catechism adds.

By attending Mass on Sundays, Catholics give “a testimony of belonging and of being faithful to Christ and to his Church. The faithful give witness by this to their communion in faith and charity. Together they testify to God’s holiness and their hope of salvation. They strengthen one another under the guidance of the Holy Spirit.”

Cardinal Schönborn, like other diocesan bishops, urged Catholics to be aware of the option of going to a Mass that is not well-attended. He also noted that some Masses can be heard or viewed via radio, television, or the Internet.

Meanwhile, St. Stephen’s Cathedral in Vienna has been closed to tourists until further notice. “For believers who wish to attend services, to pray or to go to Confession, the cathedral will remain open for up to 100 people,” the cathedral parish announced on its website.

The cathedral is currently hosting a modern art exhibit of a giant feminine purple sweater covering the high altar. In the past, the artist also created photographs of middle-aged naked men with genitals showing in varying poses.

The famous Cistercian monastery of Heiligenkreuz, visited by Pope Benedict XVI in 2007, has called for a spiritual response to the coronavirus outbreak.

“The motto in such times should be: pray more and trust in God more,” the monks wrote on their website. At the same time, the monks try “to implement the recommended precautions: for the time being, the invitation to exchange the sign of peace is not given during the conventual Mass.” Also, Communion is not received from the chalice.

According to Worldometer, there are currently 182 persons in Austria who are infected with the coronavirus. No deaths have been reported.

Italy, after China the country most affected, shares a border with Austria. More than 10,000 people have now been infected. Worldometer reported that the number of deaths rose to 631.

The Italian Bishops’ Conference announced on March 8 that no public Masses would be celebrated until April 3.

Vatican News reported that the priest responsible for Santa Maria dell’Anima, the German parish in Rome, continues to say Mass. “People can still come to the church and participate in the Masses.”

Fr. Franz Xaver Brandmayr said he technically says Mass as a private Mass, “but no one can stop me from doing it in a loud voice. I also always give a sermon.”

The priest also pointed out that he would give Communion to the faithful. “That’s where obedience stops for me. I don’t refuse Communion to anyone. We are here for our community. I know I’ve exhausted the options, but I do it with all my heart,” he added.

Archbishop Stanisław Gądecki, the head of the Polish Bishops’ Conference, has asked that more Masses be made available so that the congregations will be smaller.

“Just as hospitals treat diseases of the body, so the Church serves to, among other things, treat illness of the soul; that is why it is unimaginable that we not pray in our churches,” he explained.