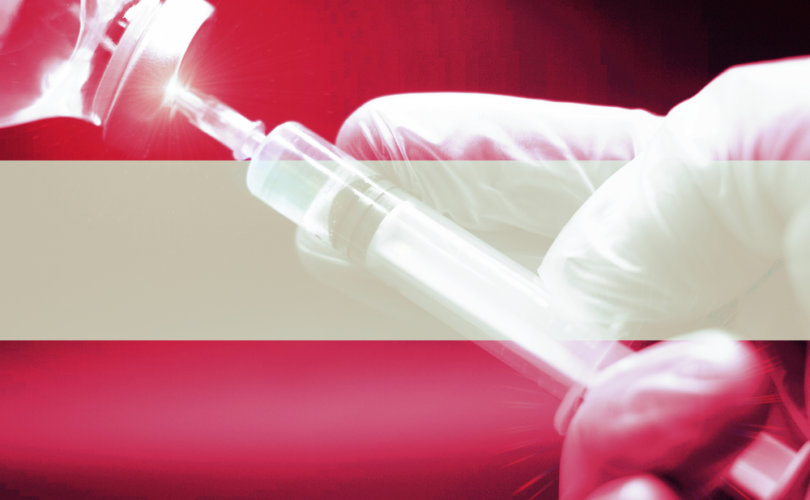 VIENNA (LifeSiteNews) — The Austrian government has suspended plans to enforce a policy of mandatory vaccination against COVID-19 for all residents over 18, but already indicated it might reverse its decision at any point.

The decision was announced Wednesday by Austrian Constitution Minister Karoline Edtsradler who said the measure was no longer appropriate in view of the currently prevailing omicron variant.

The basis for the decision was a recommendation from a commission of health experts who concluded that, due to the rapid circulation of the milder COVID strain known as omicron, a strict enforcement of the mandatory vaccination policy in place since mid-February was no longer urgent or needed.

Austrian health minister Johannes Rauch said the situation would be re-assessed in three months, after which the government could decide to reverse its decision.

Constitution Minister Edtstadler warned that the most recent decision was “far from the final chapter on the topic of mandatory vaccination,” and argued that the decision had to be as “flexible and adaptable as the virus is.”

The Austrian government first announced it would make COVID shots mandatory for all citizens over 18 back in November of last year.

In January 2022, the Austrian parliament passed the highly controversial mandate.

The new law has technically been in place since February, though its enforcement was only due to begin on March 15.

This would have meant that from that day onward, people who weren’t yet vaccinated against COVID-19 would have been liable to pay a fine of up to €3,600 (roughly $4,100), with fines renewable every three months.

These plans triggered mass protests in Vienna and other cities of Austria, on a scale rarely seen before in Austrian history.

The at least temporary decision not to enforce the mandate will come as a relief to the hundreds of thousands of Austrian citizens who have been demonstrating against the measure for months now, eager to defend their fundamental rights, as well as for up to two million unvaccinated Austrians.

The Austrian government is still encouraging its citizens to be vaccinated with the experimental mRNA COVID vaccines which have proved mostly inefficient in fighting COVID-19 and have led to millions of reports of adverse reactions worldwide.

According to Austrian newspaper Wiener Zeitung, the commission of experts behind the recommendation not to enforce the vaccine mandate warned that a potential new wave of COVID starting next autumn was “very likely.”

Echoing Edtstadler, Rauch said the Austrian government would react quickly should the situation deteriorate and hinted at a potential enforcement of the mandatory vaccination policy in the future.