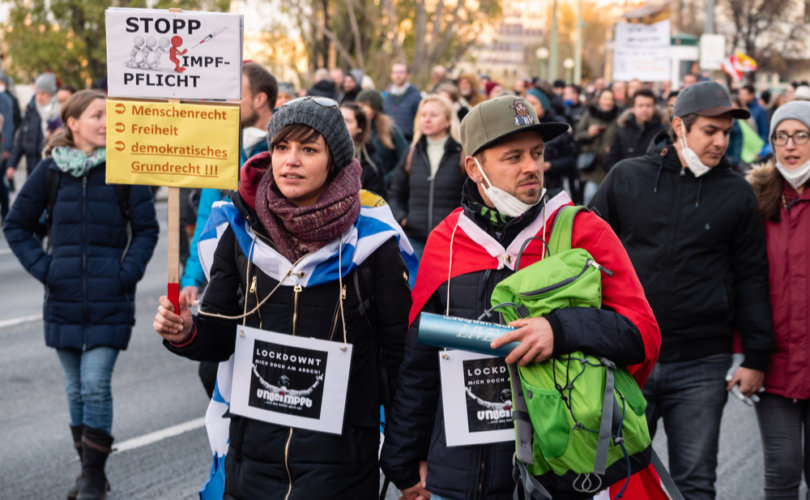 VIENNA,  Austria (LifeSiteNews) — The Austrian government confirmed that it will impose heavy fines on people who remain unvaccinated, after weeks of massive demonstrations to oppose the jab mandate.

Austrian Chancellor Karl Nehammer made the announcement Sunday, saying the mandatory vaccination first announced in November was going to be implemented “as planned” starting in February. Nehammer described the decision as “a very sensitive topic.”

According to Austria’s policy, people unwilling to be vaccinated against COVID-19 will face fines as high as 3,600 euros ($4,108). Persistent dissenters will be fined another 600 euros every month ($684,61).

The mandate will be applied to all adults in the country over 18.

Nehammer said that following a “transition period” in February that will give unvaccinated people more time to “be persuaded” to get the jab and during which “more information will be made available to them,” the mandate will be carried out in three phases.

In phase 2, “if the progress of the vaccination rate is still not sufficient” a “reminder letter” will be sent to those who are still not vaccinated.

In the event of non-compliance, and if the vaccination appointment is not attended, fines will be applied.

The announcement comes after another Saturday demonstration against the plan that gathered an estimated 20,000 people in the streets of Vienna.

Despite the Austrian government’s resolve to go ahead with its plans, the people of Austria continue to voice opposition en masse. According to Bloomberg, the government received more than 100,000 comments during a public consultation on the mandatory vaccination bill, many of which opposing the mandate.

In addition, a letter signed by more than 600 police officers was sent to the Austrian Minister of the Interior last week whose content showed that a significant part of the police forces are siding with the demonstrators and opposing mandatory vaccination.