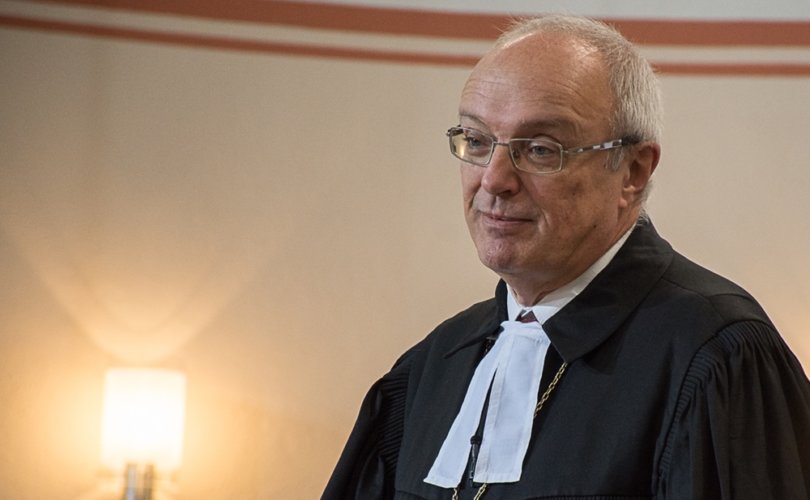 AUSTRIA, March 15, 2019 (LifeSiteNews) – After weeks of discussion, the General Synod of the Austrian Evangelical Church (EKÖ) – a Lutheran denomination – agreed on Saturday, March 9 to allow homosexual couples to receive a church blessing during a public ceremony of worship. The move was approved by 45 votes to 18.

Despite several measures intended to protect conscientious objection on the part of pastors and communities, the vote is expected to create a deep divide in the Austrian Lutheran church and some commentators in Austria are already warning that a split is in view. Discussions, while courteous according to the Synod, were pointed and “the topic was debated vigorously,” commented the non-denominational Christian media service Glaube.at.

Each party referred to the Bible to justify the opposing views. Voters for the blessing ceremony quoted the commandment of love and spoke about God's mercy and “friendliness to man.” According to the theological document published by the General Synod, their objective is to bring people who suffer from discrimination closer to Christ. They also believe that the Bible does not condemn homosexual partnerships.

Those who oppose the blessing of same-sex unions called on biblical tradition which defines marriage as a God-willed faithful and lifelong relationship between a man and a woman, pointing at a Synod resolution in 1996 which said exactly that. Since then, the Lutheran assemblies of Austria had consistently refrained from suggesting that homosexual relationships could receive a public blessing.

What has changed is the recognition of same-sex civil “marriage” which became legal in Austria last January 1st following a decision of the Constitutional Court the previous month. Civil unions (registered partnerships) were legalized in 2010.

The Lutheran Church did not go so far as to approve holding same-sex “marriages” in church, stating that homosexual partnerships are merely “analogous to marriage”. It still upholds the “understanding of marriage as a lifelong relationship between husband and wife,” based on Scripture, according to the Synod decision.

But apart from the fact that it does not mention that homosexual relations are gravely sinful according to Christian teaching, instead calling this sin worthy of a blessing, the Synod pushed the analogy as far as it could, deciding that same-sex couples will only receive a blessing if they have already entered into a civil “marriage.” For homosexual couples, this constitutes an objective encouragement to enter into a same-sex “marriage.”

Same-sex couples who are in a simple registered partnership will have to make do with a private blessing in the Lutheran pastoral framework – this has already been available to homosexuals in Austria since 2007.

As for the church ceremony, it will look very much like a marriage insofar as elements of Christian marriage will be part of the blessing. Partners will be expected to promise each other “voluntary holistic personal care, lifelong fidelity, mutual care and fidelity in good times and in bad times”, according to the evangelical news site evang.at.

But for how long? One “pastoress,” Rvd. Veronika Obermeir-Siegrist of Linz, welcomed the decision in these terms: “The Austrian law does no longer discriminate against homosexual couples, and the Church should also put love first.” If refusing same-sex “marriage” is construed as a form of discrimination, conscientious objection may well disappear in the long run.

Lutheran Bishop Michael Bünker called the move a “significant step towards the equal rights of homosexual couples.” “I am personally pleased with this decision,” he commented. “The fact that many agreed, while they were initially skeptical – otherwise we would not have reached the two thirds majority – shows that the discussion process went well. I'm proud of this church!”, he proclaimed.

Not all evangelical churches in Austria agree with EKÖ. The Evangelical Alliance in the country, of which the Lutheran Church is a member, refused to comment on its “internal affairs.” At the European level, the Evangelical Alliance has recently published guidelines on “how to respond to the LGBT agenda” in which it clearly states that “moving away from God's pattern for family life is not an option for evangelical Christians.”

But Bishop Bünker does not believe that his own church will split over the issue, even though he acknowledged the existence of opposition within the EKÖ. “How to deal with this contradiction poses a major challenge to all those responsible,” he remarked. He believes all positions have been catered for. “I hope that the decision of the Synod of March 9 found a way which will allow as many people as possible to join,” he said, adding that individual members have indeed decided to leave the Evangelical church but that to this day, this remains in the “single-digit range.”

“It is not 29 percent of church members who have spoken out against thanksgiving and blessing services for homosexual couples, but communities that have passed resolutions through their representative bodies. What opinion the almost 300,000 members of the Protestant Church have, we have not verified. In any case, the decision of the synod provides for a clear and effective protection of the divergent opinion. Thus, the public blessing of homosexual couples should only be carried out in the communities that consciously decide on it and no pastor or lecturer is forced to perform such a blessing. This, I believe, ensures a very clear respect for those who have opposed such a blessing,” he added.

And so the confusion is getting steadily worse, with the idea that the fundamental question of the very nature of marriage can be put to the vote and that contradictory views can exist side by side and deserve equal respect.

Those who oppose the blessing of same-sex couples certainly do not appear to want to allow themselves to be silenced with a mere promise of conscientious objection. A lector from the community of Windischgarsten and former director of the Blue Cross, Dieter Reichert, told Glaube.at: “I am deeply shocked that the Evangelical Church has deviated so far from God’s word. Homosexuality is referred to as a sin in the Old and New Testaments, even by Jesus himself. The decision basically legalizes this sin. I am not proud of Bischof Bünker, I would be proud if he had said that this is not right, but that we love the sinner. That's what Jesus did. Honestly, I do not know what’s going to happen now with the Evangelical Church. I think a big rift has been made.”

Presbyter Bernhard Aigner of the Evangelical Church of Marchtrenk, in Upper Austria, also criticized the decision on Glaube.at.

“In contrast to Bishop Bünker, I am not proud of our church, on the one hand because of the nature of the decision-making process, which used surprise tactics and did not allow for a discussion outside the synod before it started, and then, leaving only a short ‘period of grace’ for discussion, made proper decision making on this topic very difficult for the communities. On the other hand I disagree with the content which is incompatible with my understanding of Scripture. In the Bible, marriage is unequivocally a lifelong and God-blessed union of man and woman – and not of man and man or woman and woman (which is now – through mere wordplay in my opinion – defined as ‘analogous to marriage’). The Church is no longer subject to the Word of God, it has placed itself above it. So doing, in my view, it has made a big stride towards its own ending,” he said.