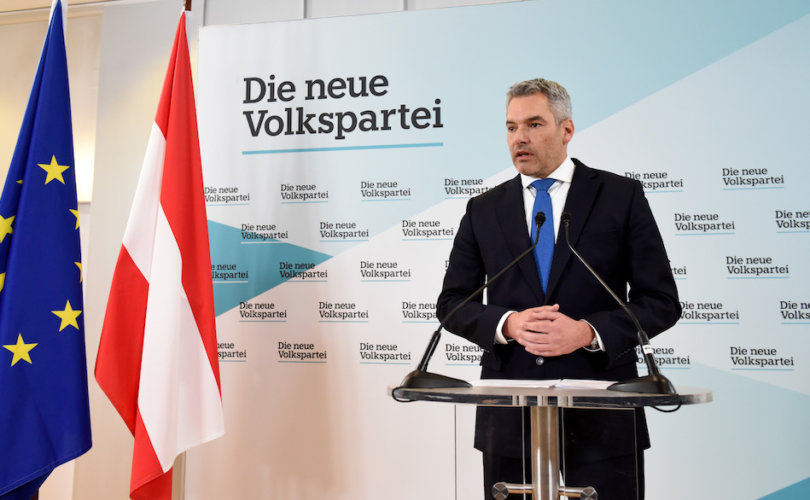 VIENNA, Austria (LifeSiteNews) – Karl Nehammer was sworn in Monday as the new chancellor of Austria amid chaos in the Austrian government and plans to mandate COVID vaccination for all residents.

Nehammer, who oversaw of the country’s draconian lockdown rules as interior minister, is Austria’s third chancellor in just two months, taking over from Alexander Schallenberg, who announced a vaccine mandate two weeks ago for residents 14 years old and up.

Schallenberg succeeded Sebastian Kurz in October after Kurz and top allies were implicated in a corruption investigation regarding alleged bribes for favorable media coverage, France 24 reported. Kurz has denied wrongdoing.

Kurz announced Thursday that he would also relinquish leadership of the center-right People’s Party (ÖVP), Austria’s dominant political party since 2017. Schallenberg resigned hours later, saying the chancellor should also be the ÖVP party leader – a position he would not seek.

The People’s Party nominated Nehammer to both posts Thursday.

This man has no idea what freedom means.
He wants a #policestate.#Resist#NoVaccineMandates

NOW – Former minister of the interior Nehammer sworn in as #Austria's third chancellor in 2 months. Protest as he arrives at the Hofburg in #Vienna.pic.twitter.com/GNOh5dkvT1

Nehammer’s installment signals no relief from the ruling government’s extreme COVID dictates. As interior minister, Nehammer took an uncompromising stance on the unvaccinated, who were ordered into lockdown last month, saying at a news conference that “every person who lives in Austria must be aware that they can be checked by the police.”

Under his leadership, nearly 5,000 police officers began enforcing compliance with COVID restrictions by early November, and all police encounters involved an inspection of vaccination status. Restaurants, hair salons, and other businesses that accept customers older than 12 without proof of vaccination or recent recovery can face up to 30,000 euros in fines under the current rules.

The freedom sought by tens of thousands of Austrians who have demonstrated against the mandates in recent weeks can only be gained by vaccination, Nehammer said.

Austria’s current lockdown is set to end next week for vaccinated people, though lawmakers may seek to extend it again, as they did earlier this month. The country’s planned vaccination requirements, which would be the strictest in the West, are expected to take effect in February and may include booster shots.

Fines for the unvaccinated could run up to 7,200 euros, according to Euractiv.

Major Austrian cities were rocked by another wave of protests last week over the proposed measures, as were several other European countries, including Belgium.