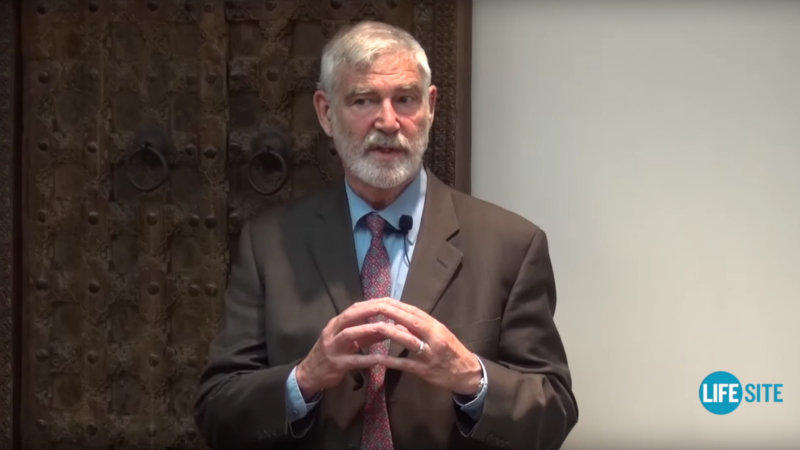 In Washington, D.C. a few years ago, at a private meeting that included several U.S. bishops and cardinals, a cardinal asked, “Who are these people” at LifeSite.

We are often told that other leaders also ask the same question. That’s because of the surprising volume of emails, mail and other communications they receive in response to LifeSite stories.

At a special event in the Fort Worth, Texas last May, renowned artist and author Michael O’Brien – author of numerous novels including Fr. Elijah and The Father's Tale – astonished and humbled us by answering that question during the first part of his deeply moving talk – far better than any of us ever could!

As we enter the second week of LifeSite’s crucial Christmas fundraising campaign (click here to donate), we want to share with you that beginning part of Michael’s talk.

In it you will experience first hand the passion, depth and spirituality that Michael conveyed that evening. You can also read the text of his words related to LifeSite at the bottom of this e-mail:

Once you have watched that video or read his speech, I hope you will help us continue to stand in the breach and resist the culture of death with your most generous donation this Christmas. As of today, we have only reached 10% of our necessary goal of $250,000.

As Michael said in his speech: “Somehow God provides. We survive by begging and the generosity of the Lord’s children pours forth four times a year. Sometimes it’s nerve-wracking, but the Lord provides.”

He’s right. It is nerve-wracking. But the Lord does provide! And with your help, I know we can keep this Culture of Life mission going into 2016 and beyond!

An international speaker, artist and author of 28 books, Michael is a deep, prayerful thinker, and has observed the development of LifeSite since its founding.  What he had to say that evening has inspired us to be even more determined and more faithful to this mission.

If you are confused about what LifeSite is and why those who founded it and those who write for LifeSite do what they do, Michael hits it right on. We are much humbled and grateful for Michael’s observations.

Excerpts from beginning of Michael O’Brien talk in Fort Worth, Texas, May 29, 2015:

“Part of our work at LifeSiteNews is to leap across many of the barriers which the tower of Babel has created,and the far worse barriers created by the culture of death.”

“This team of apostles, I’d have to tell you too many stories tonight that put flesh on this word “hero” that reveal these guys are heroes of the new evangelization. I don’t mean in any stereotypical way. I mean in the way of the ancient martyrs. They will deny it.”

“I’ve watched them for 18 years. I’ve watched them stand in the breach in our own country Canada at first, which is way ahead of anything here in the USA in terms of the degeneration of the moral order, of the cosmos, of reality itself.

“[LifeSite is] called to see the nature of the times, which takes courage. They are called to look into the depths of a very dark age with neither pessimism nor a shallow optimism, but with authentic hope, hope based in ultimate realism in the coming victory of Christ.”

“The work of LifeSite is not only to be a voice of warning in the world, a voice of teaching. They are also a voice of hope and encouragement. Many of their stories are pro-active, positive, encouraging other apostolates.”

“Somehow God provides. We survive by begging and the generosity of the Lord’s children pours forth four times a year. Sometimes it’s nerve-wracking, but the Lord provides.”

“Looking deeper into some of the problems of speaking across the gulf and touching souls, I see that the core problem is that man no longer knows who he is, has lost his sense of his eternal value. He does not know his own true story.”

“This too, is part of the task of all authentic Christian culture – to tell the true story. LifeSiteNews does it in its particular way in its area of mission.”

“LifeSiteNews, like all good journalism, also tells stories, there are many witness stories there, phenomenal, road-to-Damascus conversion stories, very beautiful stories that shake us and move us.”

“In 18 years I ‘ve watched LifeSite go from a small news service for the fledgling pro-life movement in Canada, grow and grow and it’s now feeding people throughout the world. Eight million people visited our site last month.”

“We have a very high reputation for principled journalism. We are careful not to violate caritas. It is not a forum for venting. We must sometimes address very difficult issues, very painful issues, especially when it concerns the Church and the family. We have writers who check their facts. We are often quoted even by secular news services because of our reputation. We grow and grow and keep moving to these hiatus points, quantum leaps. And we are now at the point we are having to grow farther. We are looking to our supporters to help us to do that. We will keep praying to do that and to be fruitful.”

Right now, almost a week into our Christmas fundraising campaign, we are less than 10% of the way to our goal.