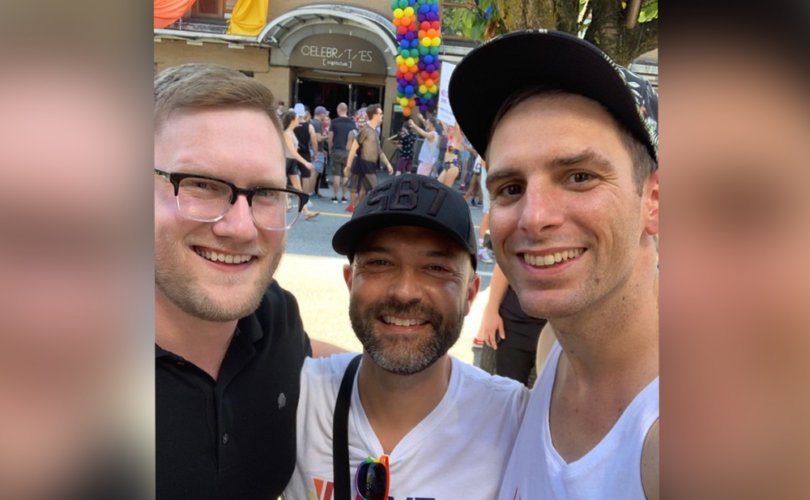 VANCOUVER, August 6, 2019 (LifeSiteNews) – Josh Harris, the infamous self-help author who famously announced he no longer considers himself a Christian, revealed on social media that he attended a Canadian LGBT “pride” parade a week after apologizing to the “LGBTQ+ community” for having espoused his former values.

The author of I Kissed Dating Goodbye, Harris was already controversial for the courtship-like dating model he advocated in his book, which he eventually disavowed. In recent weeks, he announced his divorce from his wife of 21 years, Shannon, then announced that “by all the measurements that I have for defining a Christian, I am not a Christian.”

“I have lived in repentance for the past several years — repenting of my self-righteousness, my fear-based approach to life, the teaching of my books, my views of women in the church, and my approach to parenting to name a few,” Harris declared. “But I specifically want to add to this list now: to the LGBTQ+ community, I want to say that I am sorry for the views that I taught in my books and as a pastor regarding sexuality. I regret standing against marriage equality, for not affirming you and your place in the church, and for any ways that my writing and speaking contributed to a culture of exclusion and bigotry.”

Really cool getting to spend time with Joshua Harris at Vancouver Pride, and of course spending the weekend with the lovely @matthiasroberts. �� pic.twitter.com/vAFJQ2XMHN

“What's very sad for me is that Joshua has not only given up on the faith, he's given up on all of the principles he has stood for so long,” Regent University School of Divinity dean Dr. Corne Bekker told CBN News. “The Scripture says that when we see somebody fallen and trespassed like this, that we should correct them. But do it in a spirit of gentleness. And then watch ourselves as well.”

The Post notes that Harris’ departure from Christianity and its precepts led Dr. Heath Lambert of First Baptist Church in Jacksonville to cut a foreword Harris had written from Lambert’s upcoming book on sexual purity.

“What we do know is that Joshua Harris is in absolute spiritual peril,” Lambert concluded. “He needs our love, and he needs our prayers. He has mine, and I trust he will have yours as well.”