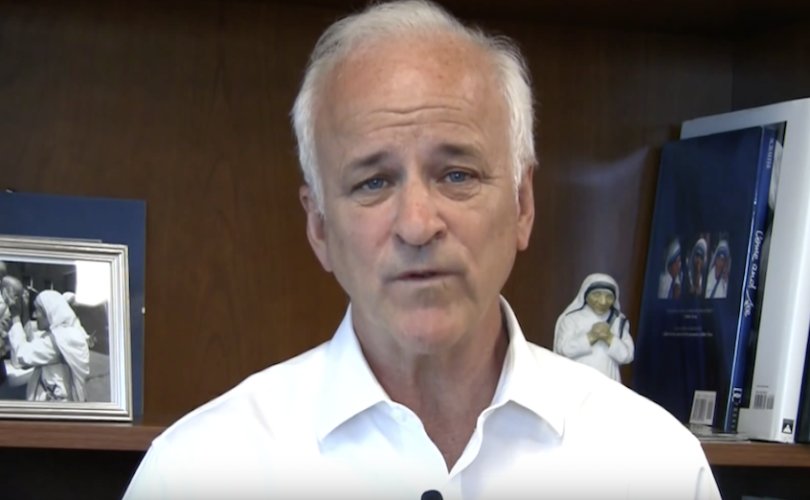 In addition to Vigano, Towey criticized Cardinal Raymond Burke, describing him as “an American prelate who has consistently opposed the direction Pope Francis has led the Church on certain matters (and may still be smarting from the Holy Father’s decision to remove him from his prominent position as head of the Holy See’s highest ecclesiastical court).”

He later walked back his comments on Burke, saying they were “not merited” and noting Burke “has been a friend of Ave Maria University since its founding and is renowned for his sincere love of the Church.”

“Jim Towey stabilized Ave Maria during a time of crisis, and ushered in an era of stability and growth,” the school’s board chairman Michael Timmis said in the announcement of Towey’s resignation. “Had it ever come to a vote the Board would have extended his term because he’s done such a great job, but Jim thought the time was right to step down when his contract ends, and transition leadership.”

“In an email sent [October 8] to students, faculty, and staff, Towey stated that the Board began discussing the extension of his contract last May, but since then Towey has decided not to ‘seek or accept’ an extension,” AMU alumna Kate Peterson wrote at Catholic World Report. “After pointing to record enrollment during his seven years as president, Towey asks in regard to the future leadership of the university, ‘What is in the best interests of this University I love?’”

“Towey said the backlash [over his Vigano statement] is not part of the reason he is stepping down as president,” the Naples Daily News reported. “He said he thought after what will be nine years at the end of his tenure, a new president would be the best thing for the university.”

Patrick Reilly, President of the Cardinal Newman Society, told LifeSiteNews he hopes the university’s founder Tom Monaghan of Domino’s Pizza will resume a more active role there in the future.

“Ave Maria University is extraordinary because of Tom Monaghan’s vision, which gave hope to Catholic families more than 15 years ago,” he said. “Keeping to that vision of a strong Catholic identity with devotion to Our Lady will be essential to the success of Ave Maria’s next president. I’d love to see Tom have a more active role in the university again. It’s his vision that makes Ave Maria the special place that it is.”

“No one has been a more enthusiastic cheerleader for Ave Maria than the Newman Society, and we continue to strongly recommend the University for its fidelity and excellent academics,” Reilly continued. “We’d love to see the next president halt opposite-sex visitation to dorm rooms, a policy change which caused much concern among many Catholic families. It would be an important signal that Ave Maria is uniquely devoted to Christian formation.”

‘Towey’s continued tenure at Ave Maria was in real doubt’

After Towey criticized Vigano, a group of alumni wrote an open letter criticizing him for “diluting justice.”

“Mr. Towey, your Rift Statement published on the 29th of August has distracted the lay faithful in this decisive hour by obscuring the truth of the scandal at hand, necessarily diluting justice,” they wrote. “You have exacerbated these great wrongs by issuing the Rift Statement on behalf of our university, thereby employing the full weight of Ave Maria’s moral teaching authority as a Catholic university.”

The alumni said that they were grateful that Towey had retracted his “uncharitable caricature of certain members of the episcopacy” but that “additional amends must be made” for the “damage” they feel his statement inflicted on the Church and their university.

At the end of August, one of those alumni, Sean McMahon of the class of 2013, shared on EWTN News Nightly that rumors were swirling about Towey leaving AMU.

“It’s a strange statement for Timmis to make,” McMahon told LifeSiteNews this week of the university’s board chair saying the board would have voted to retain Towey, had it come to that.

“If Towey’s tenure were as successful as is claimed, there would be no doubt that the board would have renewed his contract and thus no need to make such an affirmative statement. Success speaks for itself,” McMahon said. “Instead, by making such a claim, Timmis demonstrates that Towey’s continued tenure at Ave Maria was in real doubt, especially considering the scandals that Towey has been embroiled in.”

“The timing of Towey’s resignation is interesting considering his recent attack upon Archbishop Viganò, Cardinal Burke, and those faithful Catholics calling for renewal within the Church. At the time, the statement was bizarre and inexplicable but perhaps this recent announcement sheds light upon Towey’s thinking and suggests one of two things: either Towey issued his misguided statement to curry favor with a future employer knowing that he was leaving AMU or the fallout from this statement was so immense that the board recognized Towey’s tenure at Ave Maria was untenable; rather than fire their chief executive – always a messy affair – the board decided to announce Towey’s upcoming departure in an attempt to quell the bleeding.”

Under Towey’s leadership, the University nixed its Latin requirement and critics say its Catholic identity has deteriorated.

AMU says it will begin searching for Towey’s replacement in the summer of 2019.