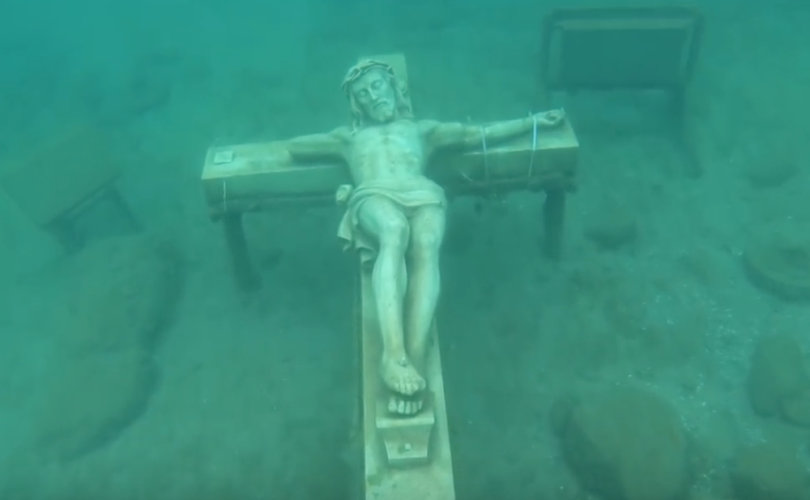 PETOSKEY, Michigan, March 14, 2019 (LifeSiteNews) — Northern Michigan is best known for its beautiful trees, shimmering lakes, and gorgeous sand dunes. What the region is not as well recognized for is being home to some of the most unique crucifixes in America.

In the small town of Indian River, located 30 miles south of the state’s Upper Peninsula, stands the National Shrine of the Cross in the Woods. Erected in 1959, the giant, 55-foot tall, 7-ton crucifix that acts as the Shrine’s centerpiece is the largest crucifix in the world. An estimated 300,000 people visit the site each year, which was declared a shrine by the U.S. Bishops Conference in September 2006.

In the nearby vacation destination of Petoskey, there exists another out of the ordinary crucifix. But instead of soaring to the sky, this one rests 22 feet below the surface of Lake Michigan.

This past Saturday, March 9, approximately 600 sightseers lined up to walk out onto the frozen water to peer through a hole carved in the ice so they could catch a glimpse of an 11-foot, 1,850-pound marble crucifix submerged at the bottom of Little Traverse Bay since the 1960s.

How did the crucifix arrive at that strange location? According to Inside Edition, a family living in a town on Michigan’s east side lost their 15-year-old son to a farming accident in 1956. They were so grieved over his death they commissioned a $2,500 crucifix to be made in Italy. When it arrived in the U.S. damaged, they refused it. A local diving club member purchased the crucifix and had it placed at the bottom of Little Traverse Bay in 1962 in remembrance of a diver who drowned. It has been there ever since and acts as a memorial for all who have perished in Michigan’s Great Lakes.

In 1985, the crucifix was moved closer inland and a year later its first public viewing was held. In 2015, the last time weather conditions permitted the typically annual event to occur, a record crowd of more than 2,000 people showed up.

WPBN reported that some of this year’s visitors traveled as far as Texas and Alaska. Jesus’ body on the cross is 5 feet tall and is missing its right arm. Several commemorative plaques have been placed around the crucifix. Divers in the area take care of and clean the crucifix on a regular basis.