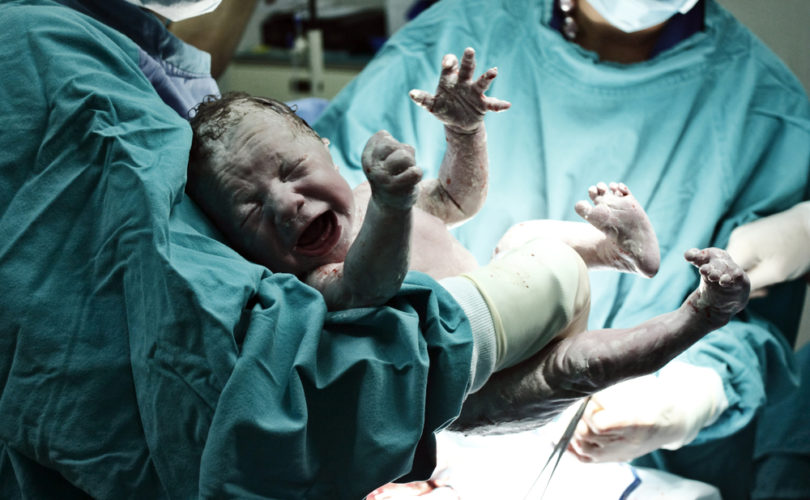 OTTAWA, April 14, 2015 (LifeSiteNews.com) – Canadian pro-life leaders are renewing calls for an investigation into the possibility that babies are routinely being left to die in the country after failed late-term abortions. According to official data from Statistics Canada, as many as 182 babies died after they were born alive following late-term abortions in 2013-14, a 16 percent increase over 2011-12.

The information drew calls for Canada to pass its own version of the “Born Alive Infant Protection Act” that is in place at both the federal and state levels in the U.S.

“These numbers testify to the gruesome reality of children who are potentially being born alive and left to die or killed,” Jack Fonseca of Campaign Life Coalition told LifeSiteNews. “Even according to Canadian law, as corrupt as it is, that would be murder. We need a born alive protection act in Canada.”

When Maloney released her first round of findings on born-alive abortees in 2012, three Tory MPs requested the RCMP investigate the phenomenon as suspected infanticides. But the office of one of the MPs, Maurice Vellacott, told LifeSiteNews that, more than two years later, “We haven’t received any satisfactory responses” to that request.

That leaves as a mystery what happened and continues to happen to babies that survive abortions in Canada.

Are their spinal cords severed, like the hundreds of hapless babies who briefly survived botched abortions by Philadelphia abortionist Kermit Gosnell, who was convicted finally for multiple homicides in 2013? Or are they simply left to die in an unused space out of sight and mind of hospital or abortuary staff and customers, as pro-life activist Jill Stanek observed while nursing in Chicago? “They [the babies] survive as short as a few minutes, to once, almost as long as an eight-hour shift,” she said in 2008.

Calls to hospitals in British Columbia and Toronto’s Morgentaler (abortion) Clinic for their protocols related to treatment (or disposal) of abortion survivors drew no response by press time. But when the issue was raised in 2012, the National Post reported that unnamed “doctors maintain that [late-term abortions] are performed almost exclusively in cases where the fetus has developed an unsurvivable anomaly, such as the absence of a vital organ — or in cases where proceeding with the pregnancy poses a risk to the mother’s life.”

The story goes on to emphasize that these fetuses qualify for the “livebirths” category uncovered by Maloney by showing the faintest sign of life, “be it a momentary heartbeat, a sudden gasp or, in rare cases, crying.”  One of the official collectors of data, the Canadian Institute for Health Information, described the following hypothetical case to instruct health information filers: when an unborn baby is diagnosed with fetal anencephaly (with no brain) and aborted at 23 weeks, the “fetus was born alive and survived one hour” – and classified with “livebirths resulting from termination of pregnancy.”

The Post found many doctors dismissing the concerns about babies being left to die but only one willing to go on the record: Dr. Douglas Black, president of the Canadian Society of Obstetricians and Gynaecologists. He said babies who show life are simply “allowed to pass away, depending on what the circumstances are, sometimes in their mom’s arms.”

Nonetheless, according to CIHI, at least 161 babies were delivered live after abortion attempts in Canada in the fiscal year 2013-14, up from 158 in 2011-12. But the earlier year included numbers from Quebec, which CIHI refused to provide for 2013-2014 on orders from Quebec. Since the 158 figure included Quebec’s 21 post-abortion live births, so it is safe to assume the real national number is even higher than 161.

Yet according to Joyce Arthur, head of the Abortion Rights Coalition of Canada, the “born live” category is not about ‘babies born alive’ but fetuses only seconds from death that were only showing “momentary things like a twitch or a pulse in the umbilical cord, at least in most cases.” What’s more, for late-term abortions, in Canada, she told LifeSiteNews, “the standard practice is to induce fetal demise before doing the abortion,” which “perhaps… doesn’t necessarily exclude some lingering signs of life for a short time.”

Countered John Hof of British Columbia United for Life: “What the average Canadian doesn’t grasp is that babies are being born and then allowed to die just because of their degree of unwantedness. Fundamental justice is being denied,” he told LifeSiteNews. Hof too called for a “born alive infant protection act” and urged “some brave pro-life MPs” to work for its passage.

As for Patricia Maloney, who publishes her statistical gleanings at run-with-life.blogspot.ca, she says nobody really knows what is happening to babies born alive in Canada. “In fact all we have is speculation, since there are no reasons attached to any of these deaths,” she states on her blogsite. “Are these livebirth babies tossed aside and left on their own, struggling to survive until they die?”

“Are they done on compassionate grounds so the mother can hold her child before the child dies? If so, then why isn't the child allowed to be born at term and placed in perinatal palliative care? Is it because we don't offer perinatal palliative care to pregnant women in these difficult situations? That would be true compassion. And if we don't offer this option, why not? … What we do know about these babies who are subject to late term abortions, is that some of them are born alive (161), then they die.”