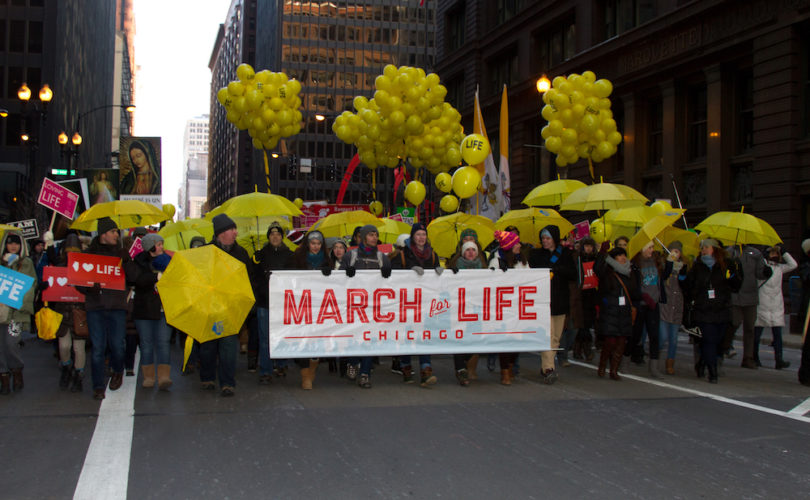 CHICAGO, Ilinois, January 18, 2016 (LifeSiteNews) — Over five thousand people braved the bitter cold to gather in the largest pro-life demonstration in the history of the Midwest Sunday afternoon.

With the temperature close to zero, diverse faiths, cultures, and generations united to proclaim the sanctity of innocent human life as they rallied at Federal Plaza, then marched past City Hall and the Illinois State Building.

The route represented getting the pro-life message to three levels of government: federal, state, and municipal.

Friday is the 43rd anniversary of the infamous Roe v. Wade and Doe v. Bolton Supreme Court decisions which legalized abortion throughout all nine months of pregnancy.

Among the featured speakers was the Right Reverend Paul, Orthodox Bishop of the Midwest, who began the Chicago March for Life by praying that God would “enlighten the minds and hearts of those blinded to the truth that life begins at conception, and that the unborn in the womb are already adorned with Your image and likeness.”

Bishop Paul added, “Be merciful, O Lord, to those who, through ignorance or willfulness, affront Your divine goodness and providence through the evil act of abortion. May they, and all of us, come to the light of Your Truth.”

“The womb should not be their tomb,” Archbishop Cupich said. “Their lives matter. We should make room at the table for them, each and every child.”

New Beginnings church pastor Reverend Corey Brooks said he wanted to take the pro-life fight to his African-American community, calling abortion a “scourge” and “the leading cause of death for African-Americans.”  Brooks explained that even though the black community makes up 12 percent of the population, it makes up 30 percent of abortions in this country.

In a rare show of bipartisanship, Republican Congressman Randy Hultgren and Democrat Congressman Dan Lipinski took the stage together to affirm their support for the sanctity of innocent human life.

Self-described “Living Testament” Melissa Ohden also spoke.  An abortion survivor, Melissa shared how she was aborted and left to soak in a burning saline solution for five days, but she didn’t die.  She ended her story with the declaration, “We are pro-life, we are pro-baby, we are pro-woman, and we are pro-love.”

Bishop Paul, who was among seven Orthodox Christian clergy attending, told LifeSiteNews, “Given the cold weather there were not as many people there as expected, but I would say the enthusiasm of the group was great, despite the cold weather.”