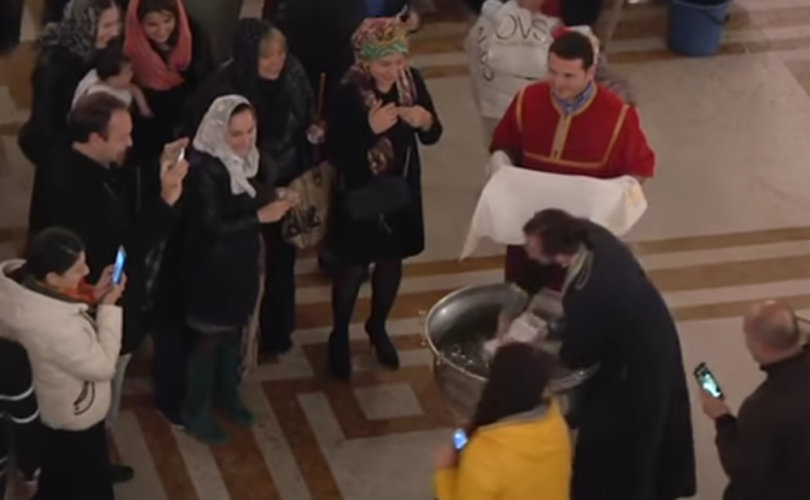 A video of the Christian initiation — complete with crying babies and parents' faces full of unspeakable joy — has gone viral, with 9.2 million views, 74,000 shares, and 26,500 comments.

The mass baptism is the brainchild and work of Patriarch Ilya, one of the most influential leaders in the country and of Georgia's Christians since the 1970s.

Facing a post-Soviet abortion rate that was rapidly depleting the population, Ilya started a family promotion campaign in 2007, promising to personally baptize every third child born to an Orthodox family throughout Georgia, as well as every subsequent child thereafter. He hosts mass infant baptisms four times a year.

The Georgian Patriarch started this initiative in a pro-life effort to decrease abortions and increase the birth rate. He officially became the Godfather to all 600 last week, and since the mass baptisms began, he has become Godfather to 29,000 children.

Georgian President Mikhail Saakashvili credited Patriarch Ilya with single-handedly reducing the number of abortions in the country, which have diminished by 50 percent from 2005 to 2010. Saakashvili also thanked his All-Holiness for the dramatically rising birth rate in Georgia, which in 2010 was 25 percent higher than in 2005.

“Patriarch Ilya is a holy man, much beloved by his people, and truly the spiritual father for his whole nation,” His Beatitude Metropolitan Jonah of the Russian Orthodox Church Outside Russia (ROCOR) told LifeSiteNews. “He cares for all his people, Christian or not. He is very enthusiastic in his support of traditionally large Christian families, the sanctity of life, and the value of the family.”

Many parents at the mass baptism attributed the reason for having a third or fourth child to the Patriarch.

“This is a wonderful day for my family,” said Tamar Kapanadze, now a 33-year-old father of four. “Our fourth son, Lashko, was baptized by the Patriarch himself, and before this he baptized our daughter Liziko. This is why we decided to have a fourth child.”

President Saakashvili announced earlier this year that his government would encourage birth-giving by distributing to parents who have a third child a subsidy of $600, and $1200 for a fourth child.

“The patriarch has already taken steps in this direction,” Saakashvili said. “We should be thankful to him for continually reminding the Georgian people that we should multiply.”

With more than 9.3 million Facebook views of the mass baptism viral video, some misunderstanding Westerners have made critical and even hateful comments.  Metropolitan Jonah explains to those who only see a wet and crying child that baptism is a wonderful and a powerful act.

“The word 'baptism' means immersion, and the age-old practice of the Orthodox Churches throughout the world is to immerse those being baptized fully, three times, in the Name of the Father, and of the Son, and of the Holy Spirit, the Holy Trinity,” Jonah explained.

Vladika Jonah continued to assure the uninitiated that in 2,000 years no child has ever been hurt by holy baptism. “While I’ve never seen the 'double dipping' in this video, it is usually a very peaceful process, and nothing to be alarmed about.”

“While the ancient Fathers of the Church accept other forms (e.g. The Didache, written 60 AD), full immersion has been the norm for centuries,” Jonah said.

In 2013, Patriarch Ilya urged the government not to allow a homosexual rally in Tbilisi, saying it was a “violation of the majority's rights” and “an insult” to the Georgian nation. He described homosexuality as a tragic sickness and compared it to drug addiction.

After Ilya's comments, thousands of Georgians protested the gay demonstration, but many misapplied the Patriarch’s comments by acting violently, such that the rally had to be abandoned — not for moral reasons but to protect the homosexuals — and they had to be driven in a bus to safety by the police.