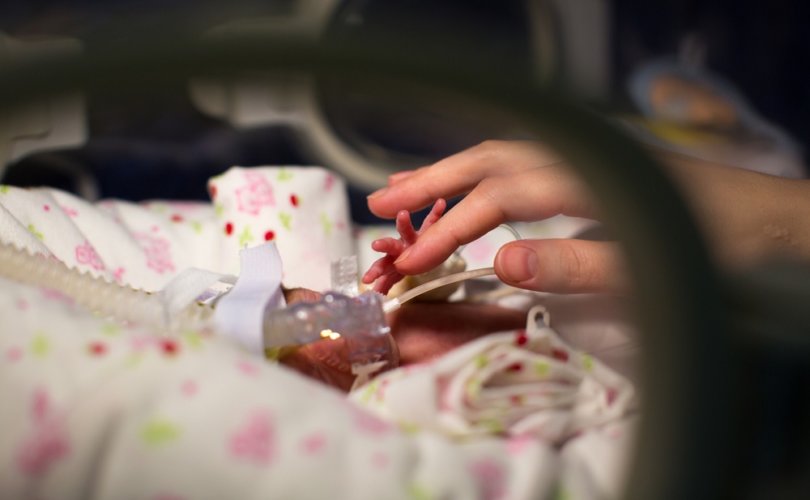 September 17, 2020 (Society for the Protection of Unborn Children) — A tiny baby, smaller than her father’s hand when she was born, given only a 10% chance of survival by doctors, is doing well and has left hospital with her parents, Kevin and Katie Cook, after a 16-week struggle.

The premature baby girl, named Mirren, was born at 25 weeks, and weighed just 467 grams at birth in a hospital in Scotland.

Her mother, Katie, had developed pre-eclampsia, a potentially fatal pregnancy disorder involving high blood pressure, which necessitated an emergency caesarean after she could not feel the baby moving.

Mirren’s parents had to wait ten days to hold their daughter after she was taken to the neonatal intensive care unit.

Katie, the mother, related the moment when she held Mirren for the first time: “It was such an overwhelming feeling, I could have cried happy tears… I had been waiting for that day for ages. In a sense it felt like she wasn't mine until that day.”

“I’m so grateful that we went and got checked, it really did save us”

The caesarean was performed just in time on 10 May this year. Doctors told Kevin and Katie that had they delayed just 48 hours, Mirren might not have survived — though even then, Mirren was only given a 10% chance of survival.

“The next four months were a rollercoaster”, Katie remembered, but Mirren “just kept fighting”.

“She had to have five blood transfusions and has been through more at hospital than most will go through in a lifetime.”

Finally, Katie was allowed to hold Mirren outside of an incubator every day through a process called “kangaroo cuddles”, a method of care that sees the baby strapped to the mother’s chest, maintaining body temperature via skin-to-skin contact.

“My motherly instinct kicked in”, Katie recalled. “The kangaroo cuddles really made a difference, because the skin-to-skin touch is crucial for bonding and developing, Mirren loved it.

“I feel it was comforting for her to feel snuggled and smell us. It also helps bring on milk for expressing, as obviously I couldn't have Mirren latch on, so had to express milk into bottles, which was hard with no baby beside me.

“The more kangaroo care we had the better it got.

“We were allowed to change her nappy, read her stories and gave her lots of kangaroo cuddles.

“She kept getting stronger and stronger, and by the time we were leaving we could really spend time with her.”

At home and healthy

Mirren is now at home with her parents after spending 16 weeks in hospital.

“We’re so happy that she's back, she's doing so well and seems to be getting stronger”, Katie said. “Now she weighs seven pounds, is getting stronger by the day and we’re all just taking it a day at a time.”