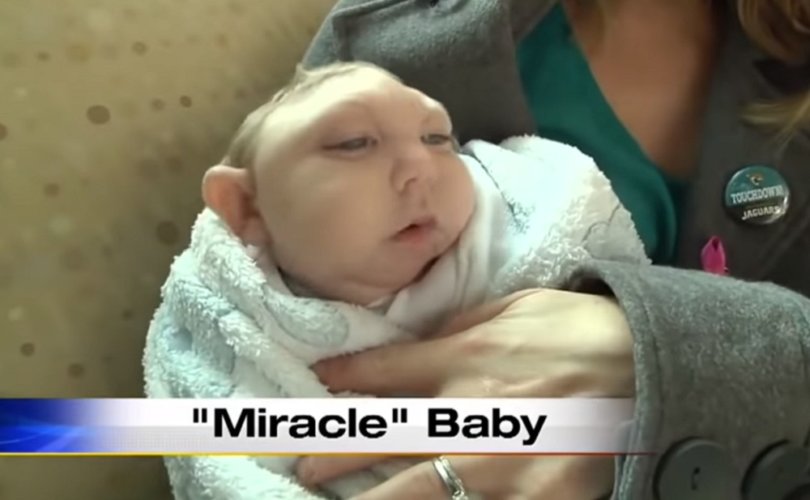 NORTH CAROLINA, April 9, 2020 (LifeSiteNews) — A North Carolina boy born with a large portion of his brain missing and whose parents refused suggestions from doctors to abort their son died “very peacefully and comfortably” in the arms of his parents on April 1.

Jaxon Buell was born in 2014, and despite being diagnosed with microhydranencephaly, a rare disorder that affects the brain’s shape, he was able to live a relatively normal life up until his death. His condition affects three out of 10,000 children conceived in the United States.

About a year ago, he started to show a slow regression and went into home hospice before passing away.

“He passed away in my arms and surrounded by his parents and family who were loving on him and providing comfort and endless hours of snuggles throughout his final days,” said Jaxon’s father Brandon in a TODAY report.

Brandon said Jaxon died due to organ failure and his body shutting down, which is common in those who have microhydranencephaly.

Jaxon’s parents, Brittany and Brandon, were told that something was wrong with their child after a 17-week ultrasound showed an abnormality affecting his head. They were then informed that his chances of survival were small and that even if he survived birth, he would not last longer than a year.

While Brittany was pregnant with Jaxon, doctors told her they were not sure of an exact cause of the abnormality. They ran a multitude of tests but ultimately recommended to Jaxon’s parents that they should abort him.

Despite never considering abortion as an option, Jaxon’s parents felt lost. It was at this point his father had a vision. They refused the abortion option and decided to put their trust in God.

“Something inside me, almost like it was coming from Jaxon, was telling me ‘Don’t give up on me,’” said Brandon.

“I remember having a heartfelt, emotional conversation because I felt I was being told that from him, even though we didn’t yet know him, and we had to go on blind faith. … We didn’t feel that was in our hands. If he wasn’t going to make it, God would make that decision.”

Despite having to be on a feeding tube, Jaxon showed signs of improvement as time progressed despite having health issues related to his condition. Although he was not able to speak in sentences, his parents noted that they always knew what he was feeling.

Ultimately, Jaxon’s life proved to be a compelling story of faith and hope, which his father said is something everyone should cherish.

“There’s a miracle behind Jaxon’s story. We want to let other families know that even when there’s a dark situation, every life should be celebrated, valued and cherished,” Brandon said to TODAY.