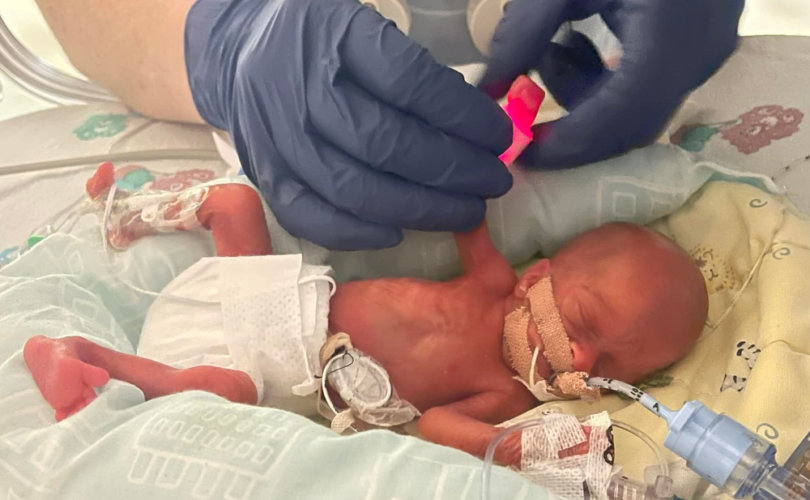 GLASGOW (LifeSiteNews) – A premature baby in Scotland has defied doctors’ expectations after she was born at 25 weeks, weighing just 11 oz (325grams), becoming the smallest baby to survive in the U.K.

Hannah Stibbles was born by emergency C-section December 30, 2021 after her 17-year-old mother Ellie Paton was diagnosed with pre-eclampsia and underwent a sudden delivery to save her life.

After Paton was rushed to Crosshouse Hospital December 29, doctors diagnosed her with pre-eclampsia. They decided to deliver the baby to save Paton’s life, but warned it was likely that the baby would not survive.

Paton was then moved to Queen Elizabeth Hospital for the operation.

“The high up doctors were coming into the neonatal unit and saying ‘babies this size just don’t survive’,” Stibbles said.

“It was made very clear to us that there was no hope for her at all.They prepared us completely for the worst, telling us they would need to resuscitate her and then said they would focus on making sure Ellie was ok,” Stibbles told the Daily Record.

“There were five doctors in the room and all of them were telling us she would very likely die.”

Contrary to the doctors’ expectations, however, Hannah was born alive at 1am December 30, able to breath on her own and without needing to be resuscitated.

It is thought that Hannah is the smallest baby born in the U.K. to survive.

Hannah has continued to grow, and brain and heart scans have revealed no concerns. When she reaches 500 grams she will be moved back to Crosshouse Hospital, though such a move could still be several weeks away.

Paton has been able to hold her daughter only once, while Stibbles has helped change her diaper. The couple are currently living in a nearby travel-lodge due to its proximity to the hospital, and described Hannah as “the best thing to ever happen to them.”

“We are so proud of her. She came out fighting for her life and proved everyone wrong. She is a wee smasher,” Paton said.

Baby Hannah’s birth at just 25 weeks puts further spotlight on the U.K.’s current abortion laws. An unborn baby can be killed up to 24 weeks if it is decided that doing so will “to reduce the risk of harm to the physical/mental health of the mother or any of her existing children.”

Abortion after this time all the way to birth is legally permitted if it is deemed that killing the baby will “prevent grave harm to the mental/physical health of the mother; reduce the risk to the mother’s life,” or if the baby is though to be “seriously handicapped.”

LifeSiteNews has compiled an extensive resource page on the development of a baby in his mother’s womb.