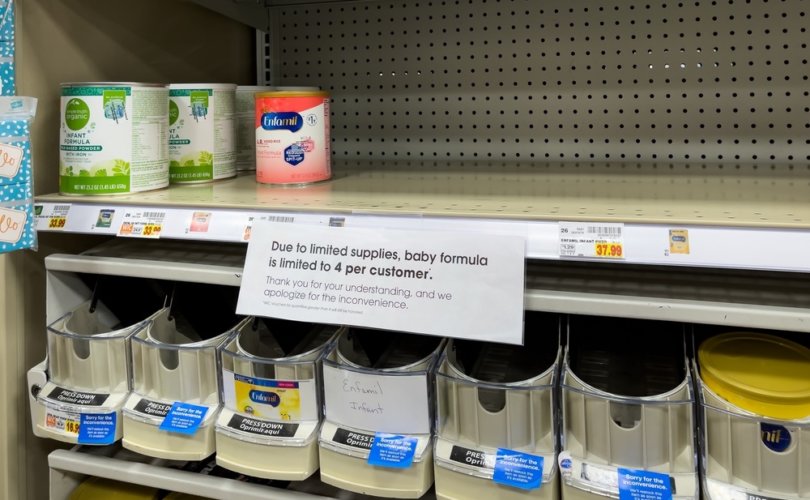 The news comes less than two weeks after the plant had reopened following its February shutdown, and comes amid an ongoing critical shortage of baby formula throughout the United States.

In a June 15 statement published on its website, Abbott said that “Severe thunderstorms and heavy rains came through southwestern Michigan on Monday evening, resulting in high winds, hail, power outages and flood damage throughout the area.”

The area has received 2 inches of rain over the past week, which is double the average rate for this time of year, Fox 59 reported.

“These torrential storms produced significant rainfall in a short period of time – overwhelming the city’s stormwater system in Sturgis, Mich., and resulting in flooding in parts of the city, including areas of our plant,” Abbott added in its statement.

According to the press release, Abbott has accordingly halted production of a specialty formula product called “EleCare” until it can “assess damage caused by the storm and clean and re-sanitize the plant.”

The company stated it has informed the U.S. Food and Drug Administration (FDA) of the issue, and will launch testing in collaboration with an independent third party to get the plant up and running again.

The shutdown “will likely delay production and distribution of new product for a few weeks,” Abbott stated.

FDA Commissioner Dr. Robert Califf said in tweets Wednesday that Abbott has been producing formula at higher-than-average rates amid the shutdown of its Sturgis plant. He added that the FDA will work with Abbott “to ensure that they can restart producing safe and quality formula products quickly” at the Michigan facility.

Califf told a Senate committee Thursday that it’s still too early to estimate how long the production delays caused by the storm damage at the Sturgis plant will last, CNN reported.

RELATED: Biden says food shortages are ‘going to be real,’ not only in Europe but in US

News of the Sturgis plant’s Wednesday shutdown comes after Abbott had just relaunched production of its baby formula products on June 4, following a months-long voluntary shutdown in February.

The shuttering of the major manufacturing plant, along with supply-chain issues caused by pandemic-era lockdowns and runaway inflation, have contributed to an ongoing nationwide shortage of baby formula that has left many American parents anxious about their ability to feed their babies.

In the first week of May, the out-of-stock rate for baby formula nationwide reached a staggering 43%, up from 30% at the beginning of April, according to Datasembly, which tracks product data for retailers.

By the end of May, out-of-stock rates soared to 74% nationally, according to data compiled by Datasembly. Bloomberg reported that 10 states, including California, Florida, and Tennessee, have been grappling with an out-of-stock rate of 90% or higher. In Georgia, the out-of-stock rate hit a staggering 94%.

At the end of last month, there was a 73% out of stock rate for baby formula across the country.

This crisis is caused by President Biden’s inaction. pic.twitter.com/t54J61hIc5

Despite the most recent disruption in service, however, Abbott has expressed confidence in its ability to continue delivering products to a nation still experiencing a critical lack of needed baby formula.

According to the company’s statement, Abbott has “ample existing supply” of EleCare and other specialty formulas.

“Abbott will have produced 8.7 million pounds of infant formula in June for the U.S., or the equivalent of 168.2 million 6 oz. feedings,” the company stated. “This is 95% of what we produced in January, prior to the recall, and does not include production from Sturgis.”

The company reiterated that once its plant is again operational, it will restart production of EleCare, “followed by specialty and metabolic formulas.” It will also move to relaunch production of popular baby formula option Similac “as soon as possible.”

Abbott had originally closed its doors after the FDA launched an investigation to ascertain whether formula produced by the company had caused bacterial infections in infants, Forbes reported.

In May, the company said that “after a thorough review of all available data, there is no evidence to link our formulas to these infant illnesses.”

As the baby formula crisis in the U.S. grabs headlines and generates anxiety among American parents, the Biden administration has been put on the back foot.

Earlier this month, when asked by a reporter why his administration did not “move quicker on the baby formula shortage,” President Biden said he didn’t “think anyone anticipated the impact of the shutdown of … the Abbott facility.”

When the reporter noted that CEOs had previously told Biden they believed it would have a large impact, the president responded, “They did, but I didn’t.”

Reporter: Why didn’t you move quicker on the baby formula shortage?

Biden: “I don’t think anyone anticipated the impact of the shutdown of Abbott facility.”

Reporter: “Didn’t the CEOs just tell you they understood it would have a very big impact?”

Meanwhile, the Biden administration has also faced massive blowback from conservatives for reportedly shipping baby formula to the southern border while American families struggle to feed their babies.