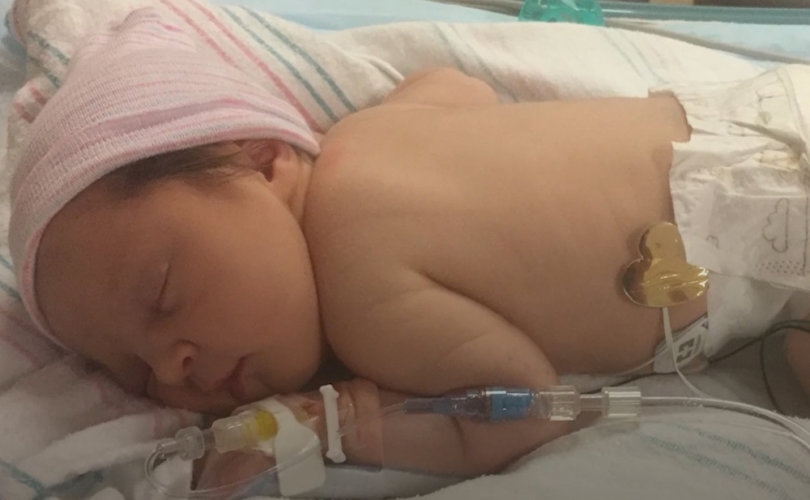 Baby Adrielle came into the world during Hurricane Harvey at Texas Children's Hospital.

HOUSTON, August 31, 2017 (LifeSiteNews) — The birth of a long-awaited baby began just as her parents became trapped by flooding caused by Hurricane Harvey.

Annie and Greg Smith, both doctors, had recently moved to Houston from Virginia for advanced medical training. Annie, 32, had suffered two miscarriages before becoming pregnant a third time, and the couple had carefully planned the birth. It was scheduled for Sunday.

However, at about 8 a.m. Sunday, as the Smiths looked out of the window at the water now encircling their apartment building, Annie realized she was already in labor.

Between fruitless calls to 911 and the Texas National Guard, Greg, although a specialist in pediatric anaesthesiology, prepared to do a home birth. He collected household supplies such as scissors and needles and asked his visiting mom, Sue Chor, to sterilize them with boiling water.

A neighbor dropped by to check on the couple and summoned more medical help via the building’s social media network. Fifteen more medical trainees grabbed whatever instruments they had on hand and crowded into the Smiths’ apartment.

In the end, Annie got in touch with the director of her medical program, and the director’s dad, who lived near a fire station, walked over to ask the firefighters for help.

Greg told ABC News, “I was with Annie and I looked out the window and I saw this big truck come pulling up and I said, ‘Holy cow — I think someone is here for us.’”

The rushing water outside was chest-height, and so the neighbors formed a human chain to get Annie and Greg safely onto the flatbed truck.

“I just kind of held on to them one person at a time and crawled along their arms until the firemen helped me up the ladder onto the truck,” Annie told ABC News. “I was sitting on a fire hose in the back of the truck with a shower curtain over my head and looking at all the floodwater around us thinking ‘This is so bizarre.’”

The couple arrived at Texas Children’s Hospital 15 minutes later. Hospital staff, marooned by the flood at the hospital since Friday, were working alternate 12-hour shifts.

Baby Adrielle was born 12 hours later, at 1:59 a.m. on Monday morning. She weighed 7 pounds,  6 ounces, and both mom and baby are doing well. Family members have nicknamed the girl “the Hurricane” and “Baby Harvey.”

“We felt like we had to surrender this to God,” Greg said. “Everything about this pregnancy is God’s will. That’s why her name is Adrielle. It means she belongs to God.”