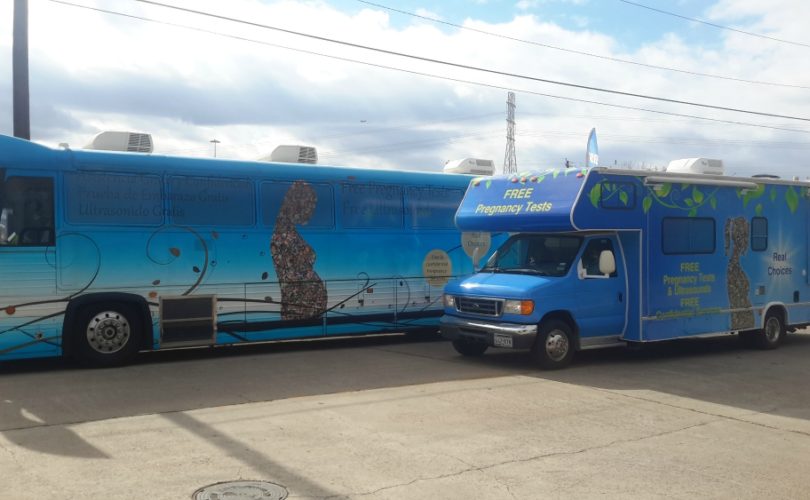 HOUSTON, TX, July 29, 2015 (LifeSiteNews) — Yesterday, more than 13,000 people in 65 cities rallied to demand Congress defund Planned Parenthood. In Houston, a rally with nearly 400 people had an added benefit: two parents who entered the Planned Parenthood facility in front of which the rally was held chose life for their baby, after meeting with the pro-lifers.

The sidewalk counselor was “giving [women] coupons for a free pregnancy test and free ultrasound. One of the people to receive one was a young woman with her boyfriend. Luckily, the woman was driving, and stopped and rolled down her window to receive one.”

“As we later found out, if the boyfriend had been driving, he most likely would not have stopped, as he was wanting her to abort.”

Melchor told LifeSiteNews that the Coalition places its mobile clinic across from the clinic, which is part of the Planned Parenthood Gulf Coast chapter, six days a week. “We see about 10 to 12 women per day. Yesterday, including during the rally, we saw 10 women at our center.”

Melchor explained that the speakers at the rally could most likely be heard from inside the abortion facility, thanks to the sound system.

“Almost as soon as the Rally ended I received a call from this young woman who was inside Planned Parenthood waiting to have the ultrasound that is required by Texas law before her abortion. On the coupon my cell phone number is given for any questions a woman may have.”

“She asked me if she could come to our Big Blue Bus for an ultrasound and of course I said 'yes.' She asked if she would have a long wait in the bus because her boyfriend did not want her to get out of line in Planned Parenthood and come to us.”

Melchor explained that the woman “commented on the large number of people on the street, and I believe this gave her the courage to go against what he wanted her to do and come over to us. Of course, she was greeted very warmly by the pro-lifers who saw her exiting, and she entered our mobile crisis pregnancy center.”

“As we were preparing her for the ultrasound the boyfriend could hardly wait to get her out of the bus, and was acting rudely towards her, but through the grace of God she stayed for our ultrasound. We were able to show them both their 10 week unborn child on the big screen T.V. that is the monitor for our ultrasound machine. The baby could be seen so well with his or her little heart just beating away and moving around in the gestational sac!”

According to Melchor, the image moved both mother and father. “The mother was very happy and excited, and even the boyfriend was smiling. They left with the woman saying that she was not going to abort, and she made an appointment to return for another free ultrasound in two weeks.”

“Because of the extensive follow up we do with all of the moms we have the privilege to serve in our Big Blue Bus, we will be in touch with her several times before her two-week appointment.”

Melchor said that while her group has a second, smaller mobile center, they can only afford to have it in front of abortion clinics two days per week. “We see 3 to 4 women per day in that center,” she explained, “and we're raising money to try to get it on the street more often. There are seven abortion clinics in Houston.”

Despite the challenge of fighting the well-funded abortion industry, Melchor says that “since we have been on the road, nine out of ten of the pregnant women we see chose life for their unborn child.”

And how can pro-life Americans help the young lady who chose life from inside a Planned Parenthood clinic? “Please keep this mom and all of the women in danger of abortion in your prayers.”

Texas Right to Life spokesperson Melissa Conway told LifeSiteNews that “the rally yesterday serves as a testament to the commitment Texans have in holding Planned Parenthood accountable for selling baby body parts. The violent injustice committed behind the surgical curtain of an abortion must end. Nearly 400 Texans joined in one voice to say “Tiny Texans deserve better.”