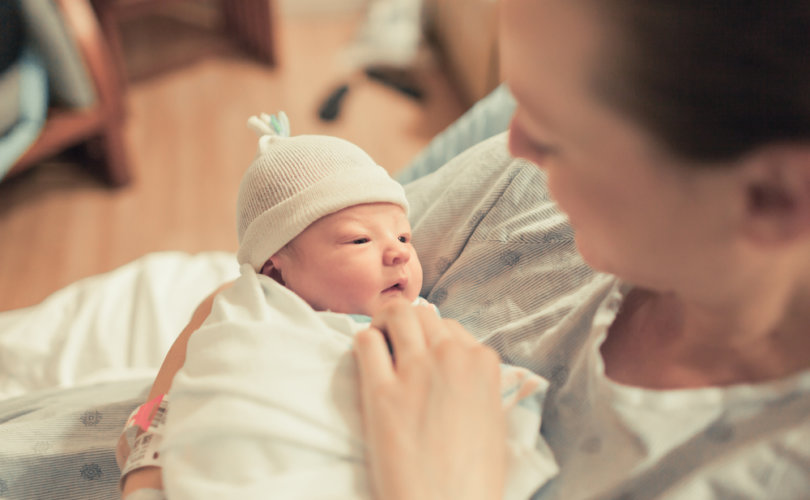 (LifeSiteNews) — A mother and her child have arrived safely at home after a doctor recommended an abortion since the baby boy had only a one percent chance of survival.

U.K. mother Ann Rice chose life for her now 9-month-old son Chester Rice. Chester was born with underdeveloped lungs, and weighing in at under two pounds at 30 weeks gestation, following 11 weeks of severe complications in which Ann’s water had broken at just 19 weeks.

“I didn’t even know it could happen, I never knew that you could break that early, and you could still continue the pregnancy,” Ann told a Wales newspaper.

“They [the doctors] said, ‘look there’s nothing we can do — if it was your waters then nature will take its course and you’ll miscarry,’” she recalled. A doctor then told her her, “You’ve got a 1% chance of the baby surviving the week.”

Another doctor told Ann she should have an abortion, as the complication, known as preterm premature rupture of membranes (PPROM), could lead to her developing sepsis and threatening her life as well as the child’s.

Despite this, Ann and her husband Christopher Rice decided that even with the one percent chance of survival, they had to choose life.

“It’s very scary to be put in that position, I know the doctors have to be very straight about the chances, but for us, a one per cent chance was still a chance,” Ann stated. “He’s proof that yes, nine times out of 10 they’re born early and there can be issues like Chester’s lungs which are underdeveloped, but we had that hope that it can happen and not to give up.”

“If I had listened to doctors and not taken the day to research it and look into it myself, I would assume a lot of people would go for the option of terminating, but there is hope,” she said. “He’s our little miracle, really.”

While this mother chose life, abortion is a gigantic industry, with worldwide figures from the last 100 years suggesting over one billion abortions have been performed globally.

Despite the claims that abortion is simply the removal of an unwanted “clump of cells,” the reality of the procedue is much more vicious.

Surgical abortions are typically performed between 5 and 13 weeks of pregnancy. A suction catheter is inserted into the womb. The unborn baby is then ripped apart and squeezed down the catheter. A curette is used to scrape the lining of the uterus to ensure all body parts are removed.

Even worse, surgical abortions that are carried out in the second trimester of pregnancy involve using a sopher clamp to grasp and rip the limbs of the child. The head is clamped and crushed and the abortionist must assemble the body parts on a tray to ensure no remains are left in the womb.

While pro-abortion advocates also insist abortion is an integral part of “women’s healthcare,” overwhelming scientific evidence shows women who have had an abortion often suffer extreme and even permanent mental disturbances as a direct result of undergoing the procedure.

The prestigious British Journal of Psychiatry (BJP) recently published “Abortion and Mental Health: Quantitative Synthesis and Analysis of Research Published 1995-2009.” The paper, a culmination of Dr. Priscilla Coleman’s extensive experience in the field of abortion and mental health, finds that women who have undergone abortion have an 81% increase in the risk of mental health problems, and an even greater risk for substance misuse and suicidal behavior (230% and 155% respectively). Nearly 10% of the incidence of all mental health problems was shown to be directly attributable to abortion.