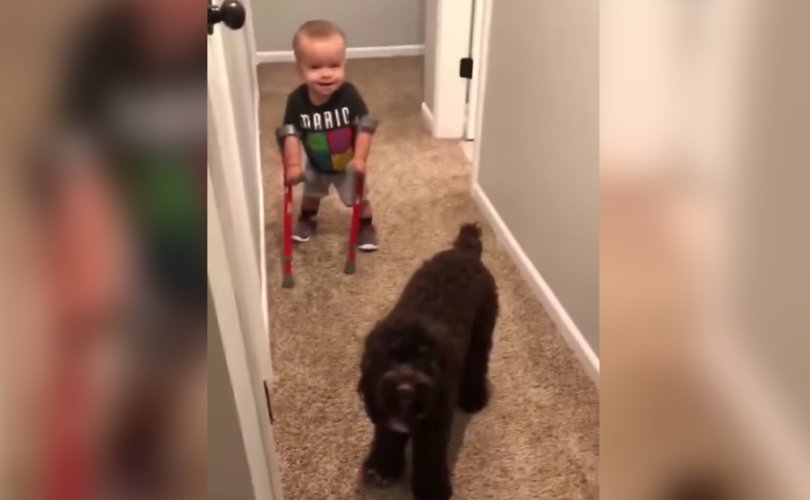 Roman Dinkel, whose chances of walking were greatly improved by prenatal surgery, takes some of his first steps. In front of him is the Dinkel family dog, Maggie.

KANSAS CITY, Missouri, October 5, 2018 (LifeSiteNews) – Doctors told an expectant mom that her son had spina bifida and might never walk. But thanks to his parents’ love and prenatal surgery, adorable toddler Roman Dinkel has become an internet walking sensation.

A video of Roman taking some of his first steps, with the aid of tiny crutches, has gone viral, seen millions of times. Last month the toddler appeared on “Good Morning America” with his mom Whitney, dad Adam, and the family puppy, Maggie. Maggie appears in the eight-second clip, as Roman squeaks, “Look, Maggie! I’m walking!”

Thousands of people have posted messages to the Dinkel family’s Facebook page, “Defying Odds: Roman Dinkel’s Journey,” and Youtube to say how much joy and inspiration Roman has given them.

“I would never judge a person for making that decision,” mom Whitney told LifeSiteNews. “It is obviously not what we believe. But often times doctors paint a very grim picture of what the life of a child with spina bifida will look like. They say [he’ll have] severe brain damage, will be paralyzed, in pain their whole life, and they make you believe that you will bring them into this world suffering until they die. But those things just aren’t true. That’s outdated information.”

Adam and Whitney decided that the best thing they could do for their son was to have doctors operate on his spine before he was born.

“The theory is that the quicker you get the nerves back inside the body the less damage they will sustain. So getting his nerves back in at 25 weeks [versus] 40 weeks is huge,” Whitney said.

She told LifeSiteNews that she was frightened that the operation, performed in St. Mary’s Hospital, would cause Roman to be born prematurely.

With two small children, Layton and Gracie, already in the house, and her husband with his chiropractic practice to attend to, Whitney relied on the help of her mom, who moved in when the expectant mother was advised to rest. The family was also sustained by their faith.

“We had so many people praying for us and I definitely know that the peace I felt came from God,” Whitney said. “I knew He pointed us in this direction and I knew that He would take care of the rest, no matter how that turned out. We just had to trust in Him. And we did.”

Roman was born in Kansas City’s Children’s Mercy Hospital on May 5, 2016, healthy, happy, and adorable. Although his parents were warned that he might have cognitive delay and be paralysed from the knees down, Roman turned out to be a clever little boy determined to walk as soon as he could. Thanks to the operation, therapy, and the help of his parents, this became a reality.

“We do believe getting the fetal surgery gave him a higher chance [of being able] to walk,” Whitney told LifeSiteNews. “It’s been proven that fetal surgery allows you to function better.”

Now able to take steps without a walker, Roman is still on his journey to full mobility. He gets regular chiropractic adjustments and physical therapy. His parents work with him at home, and he wears braces, called SMOs, on his ankles to keep his feet properly aligned.

“He doing awesome with walking,” his proud mother reported.

Adam Dinkel told “Good Morning America” host Michael Strahan that he and Whitney want to show parents of babies diagnosed with spina bifida that “this is an amazing life.”

“This is what you get,” he said happily, as Roman clambered to his feet on the couch.

“A lot of kids do have many more issues than Roman, but they’re happy and their family is happy to have them,” Whitney Dinkel told LifeSiteNews. “So we want people who get this diagnosis to think of Roman and how amazing he is.”