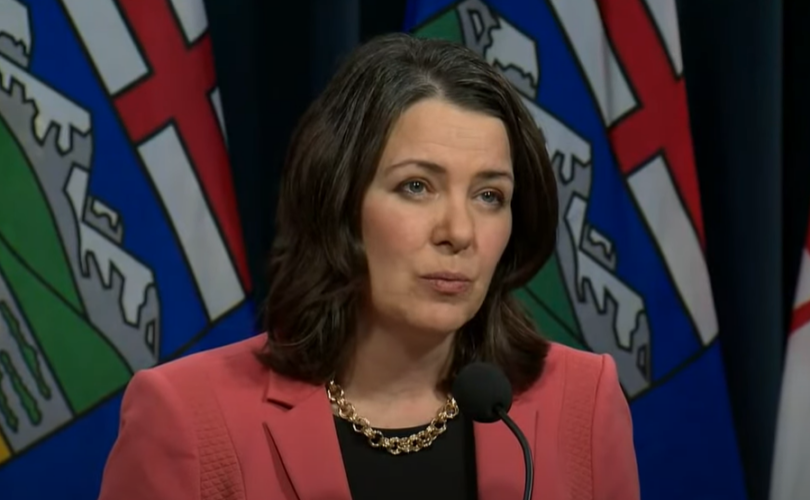 (LifeSiteNews) — Alberta premier Danielle Smith spared no words in telling Prime Minister Justin Trudeau to “back off” on his government’s new “just transition” green energy plan, which if enacted could potentially eliminate millions of jobs in the nation’s oil and gas sector.

Without mincing her words, Smith accused Trudeau of carelessly playing with the lives of thousands of Albertans, saying the prime minister needs to “back off” or risk “further division” in the country.

“He has to own that [he causes division] and he needs to stop doing it,” charged Smith.

Smith’s comments are in a reference to an announcement made two weeks ago by Trudeau’s Natural Resources Minister Jonathan Wilkinson, who informed citizens the federal government will be moving ahead with what it calls “just transition” legislation.

The so-called “just transition” legislation will be designed to coerce workers in the oil and gas sector to transition into “green” jobs.

The announcement was immediately blasted by Smith and her cabinet, who called the plan reckless and warned it could devastate their province.

Alberta is not just home to the largest oil and gas reserves in Canada, but also ranks fourth in the entire world for such reserves, behind only Venezuela, Saudi Arabia and Iran, making the sector integral to the province’s economy and way of life.

In her conversation with Bell, Smith said that Trudeau is playing a “dangerous game here” with Alberta’s oil and gas industry, and that “Albertans are not going to sit back and be devastated once again by yet another Trudeau.”

Smith said that Trudeau’s job should be to “unite us,” but instead, he is actively “creating a real problem of unity in the country.”

She noted how she is “sick and tired” of Trudeau “demonizing Alberta and thinking he can just unilaterally make decisions without a bloody phone call to tell us what he has in mind.”

“I’m terrified for Albertans,” she added.

“I knew what was intended when they used the language ‘just transition.’ I don’t think Albertans believed what they had in mind for us,” continued Smith, who then vowed to fight back against Trudeau’s plan that she says would “shut down a quarter of our economy.”

Getting into specifics, Smith promised that if needed, she would use the recently passed Alberta Sovereignty within a United Canada Act, known colloquially as the “Sovereignty Act,” to push back against “unconstitutional” federal government overreach.

“When you are facing a federal government that is that antagonistic and that cruel,” noted Smith, “you have to fight back.”

Earlier in the week, Smith also took a direct shot at the World Economic Forum (WEF) meeting currently taking place in Davos – a summit that is being attended by Trudeau’s finance minister – saying that she wants nothing to do with a group that is out to destroy her province’s economy.

Alberta’s history with the Trudeau family

This is not the first time Alberta has clashed with the Trudeau family, in fact, the province has a decades-long history of fighting a Trudeau-led federal government when it comes to asserting its autonomy over its natural resources.

Smith said recently that Trudeau Junior’s “just transition” plan will make his father’s NEP look like child’s play, but nonetheless vowed this will not stop her from fighting back.

“We’re not backing down on this one and we would ask all Canadians to join us on this.”

Since becoming prime minister in 2015, Trudeau has pushed a radical “climate change” agenda which has increased costs for many products, primarily due to his imposition of a punitive and ever-increasing “carbon tax” on gas and diesel.

The raising of fuel-related taxes has come in conjunction with the Trudeau government’s decision to join a variety of global initiatives, including the United Nations’ “2030 Agenda for Sustainable Development,” which involves phasing out or reducing the use of coal-fired power plants, nitrogen-rich fertilizers and natural gas.

None of this has been done without criticism, however, as even a former Liberal Party MP has blasted Trudeau’s efforts as “beyond farcical” and “irresponsible.”