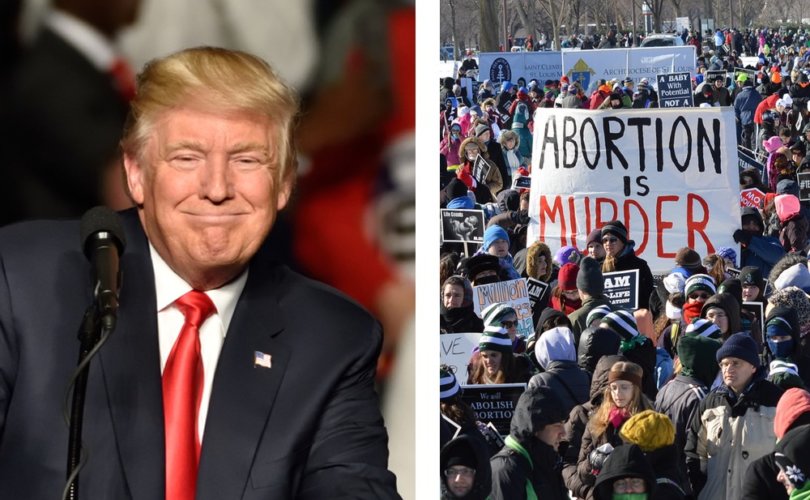 WASHINGTON, D.C., January 18, 2018 (LifeSiteNews) – Hundreds of thousands of pro-life advocates are converging on Washington for Friday’s March for Life to mark 45 years of legal abortion in the United States, and proclaim that “Love Saves Lives.”

They gather to mourn some 60 million children killed in the womb since the Supreme Court’s Roe v. Wade ruling struck down abortion laws on January 22, 1973, and to renew their strength to continue the battle to secure protection for their country’s tiniest and most vulnerable citizens.

“Choosing life is not always easy, but it is the loving, empowering, and self-sacrificial option,” March for Life president Jeanne Mancini told LifeSiteNews.

And in a momentous first, March for Life participants will hear a live video address from their sitting president.

President Donald Trump will address participants by live-stream video from the White House Rose Garden to kick off the rally preceding the March.

“The President is committed to protecting the life of the unborn and he is excited to be part of this historic event,” White House press secretary Sarah Huckabee Sanders told media Wednesday.

With the March coming just one day before the first anniversary of his inauguration, Trump’s administration will undoubtedly be a hot topic during the many symposiums, rallies, protests, panels, galas, and other March events that began Thursday and continue until Saturday afternoon.

Certainly, the Trump White House has shown greater public support for the March than any other, with Vice President Mike Pence and counsel-to-the-president Kellyanne Conway speaking at the event last year.

“The Trump administration is already shaping up to be the most pro-life in history,” David Daleiden told LifeSiteNews.

The well-known founder of the Center for Medical Progress will be speaking at Thursday’s Law of Life Summit, and taking part in Friday’s Digital Action Summit organized by the Family Research Council. CMP’s shocking undercover videos of Planned Parenthood officials negotiating the sale of aborted baby parts sparked legislative efforts to cut off federal funding to the abortion giant and investigations into its grisly activities.

“President Trump is ready to sign the bill to strip $500 million in taxpayer subsidies from Planned Parenthood’s abortion empire as soon as the Senate gets its act together and sends it to him,” said Daleiden.

“So many Americans are grateful that the Department of Justice is now doing its job with Planned Parenthood under federal investigation for selling aborted baby body parts,” he added.

“The pro-life movement is stronger than ever under President Trump,” said Fr. Frank Pavone, president of Priests for Life U.S., to LifeSiteNews.

“I believe history will show him to be the greatest pro-life president we have had. His courage and direct way of thinking and his problem-solving mindset are serving the cause well.”

Fr. Imbarrato was among 10 people arrested in recent Red Rose Rescues in Michigan and Virginia. He is taking part in Friday’s “Free Mary Wagner” rally outside the Canadian embassy. Wagner, 43, is in jail in Canada awaiting trial on charges of mischief and breach of probation. She’s spent four years and nine months so far behind bars for peacefully attempting to persuade women to choose life for their unborn babies.

“In our love for God and His creatures, we desire to save these babies from being killed through our loving witness to their moms, right up till the last moment,” he said.

Monica Migliorino Miller, arrested in Michigan for her pro-life rescue efforts, said the March is important “because it keeps the issue of abortion alive in the mind of the public.”

“Moreover, the March reinvigorates pro-lifers to stay the course, to not give up until the unborn are free.”

While the pro-life movement is “making advances” in “some important ways,” there is “so much work to be done,” she said.

“Respect for life has seriously eroded and it will probably take decades to build the true culture of life where human life is respected from womb to tomb.”

Fr. Pavone described the March as “a day of prophetic victory.”

The marchers are “marked by both sadness and joy. Our grief is real because babies are still being killed and families wounded,” he told LifeSiteNews.

“But our joy is real because we already have the victory of life in Jesus Christ and we know that history will vindicate us and that we will have a culture of life.”

The March starts with a musical event at 11:30 Friday, January 19, followed by the rally at noon.

Aside from President Trump, rally speakers include:

The March for Life rally begins 11:30am ET, with speeches at around 12:00pm. The March itself takes place at 1:00 p.m and proceeds up Constitution Avenue to Supreme Court and Capitol Building.

The full list of events happening during March for Life week in D.C.