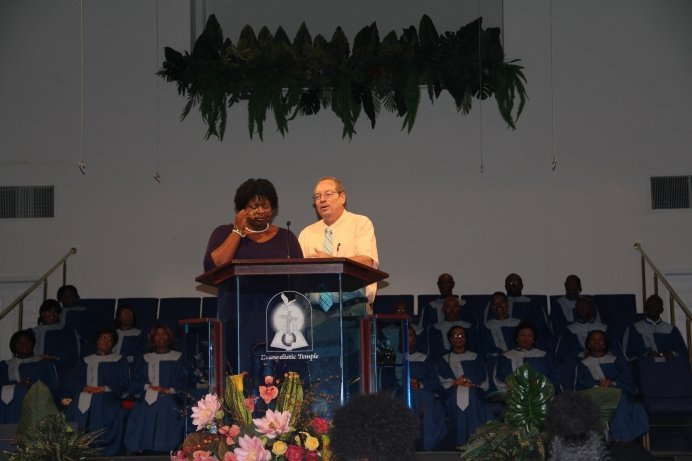 Rhonda Darville, executive director for Godparent Center, spreading a passion for the sanctity of life in the Bahamas.

March 15, 2016 (PregnancyHelpNews) — Bahamas Godparent Center in Nassau, the only freestanding pregnancy center in the entire commonwealth of the Bahamas, is starting a two-year campaign to spotlight the pro-life movement in this island nation.

The campaign, “Become a Voice for Life,” will emphasize that all lives are sacred and created by God, with the long-term hope of illuminating the need for churches and communities to take a united stand against abortion.

“Abortion isn’t legal here, but it’s happening,” Rhonda Darville, the center’s cofounder and executive director, said. “We recently had a major medical doctor, a candidate for Bahama’s parliament, put out an article saying we need to legalize abortion to decrease the crime rate in our country. It was in the beginning of October 2015.”

The fight for the unborn lives in the Bahamas has already begun.

“When the U.S. sneezes, the Bahamas catches the cold!” Darville laughed. “A lot of people were really angry about what was happening at Planned Parenthood in the U.S., but didn’t realize that it was alive and well in the Bahamas. That started a lot of dialogue, getting people to pray for us.”

Although the Godparent Center just opened in June of 2015, Darville and her husband, Jeffrey, have been working toward getting local churches involved in the center. The “Become a Voice for Life” campaign is a key piece to that ambition.

“What I really want people to know is there is a push to legalize abortion in this country,” Darville said. “We are asking people to take a stand; do something different; become a voice.”

From teaching about sexual purity in schools, to speaking in churches about getting involved, Darville’s passion has led her to explore multiple avenues to promote the value of every life and the vital work of her center.

While she’s taken the initiative, Darville is starting to see an encouraging response to her message.

“We speak anywhere they let us,” Darville said. “We’re speaking in schools, women’s groups, youth groups and churches. We finish at one place and another calls us asking us to share what we’re doing.”

While attending a Heartbeat International’s Pregnancy Help Institute in December 2015, Darville said she realized her center was in the same pioneering position Heartbeat found itself in the early days of the pregnancy help movement.

Today, Heartbeat International’s network includes 2,000 pregnancy help locations around the world, while the movement itself is much broader, with over 6,400 listings—including non-affiliates—in Heartbeat’s Worldwide Directory.

“They talked about how in the 1960’s, they realized the need to provide an alternative to abortion,” Darville said. “God started telling me, ‘Where they were then is where you are in the Bahamas right now.’ It helped to see what kind of hurdles we would need to jump over.”

Darville herself worked many years in various pregnancy centers in the U.S. before returning to the Bahamas. Coming back to her home country has proven to be quite a challenge.

“The big difference between working in the Bahamas verses the U.S is that charitable giving in the U.S. is a big deal,” Darville said. “This is somewhat of a new concept here.”

Even so, God has miraculously provided time and again. Although currently operating out of a local seminary, a donor has graciously put a bid down on a building they hope to see become the Godparent Center’s permanent home.

“I didn’t fully comprehend what it was God was asking me to do,” Darville said. “I know how crisis pregnancy works but I’ve always walked into a center that already existed.”

Besides their work with crisis pregnancies, they will also be working closely with families.

“In the Bahamas, we have an 83 percent unwed mothers’ population,” Darville said. “That’s why it’s important to show the young people something different. Because we have so many broken homes here we have to reach these families.”

Due to the high crime rate in the Bahamas, abortion has become a viable option in many minds for dealing with future crime.

“They think, ‘Let’s take out the poor people and eliminate how many children they’re having because they’re the ones that have the high crime rate,’” said Darville.

The Godparent Center hopes to change this narrative with the campaign.

“In our culture a lot of times if you’ve gotten pregnant your life is over,” Darville said. “We’re saying it’s a pause, not a stop.”

Darville has also been reaching out to pregnancy centers in other Caribbean nations and hopes to form a Caribbean pro-life coalition.

“One thing that encourages me is the fact I know I’m not alone,” Darville said. “I’m not fighting by myself.”

It’s a battle whose benefits are clearly paying off.

“To date we’ve seen seven clients. We currently have two who are giving birth this year, one in June and one in August with twins,” Darville said. “We’re excited about that.”

At present, the center’s main goal is to reach as many people as possible via the “Become a Voice” campaign and hopes to have served 100 clients by the end of 2016.