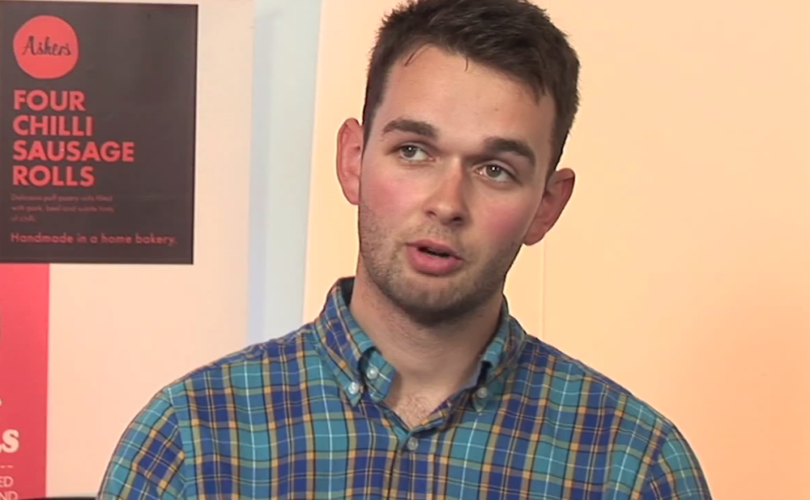 Daniel McArthur, 24, is being taken to court in Northern Ireland for refusing to bake a cake promoting same-sex "marriage."The Christian Institute

BELFAST, Northern Ireland — Daniel McArthur, 24, is the general manager and now spokesman for Ashers Bakery in Belfast.  It’s a Christian family business, owned by the McArthur family, which has in the past refused cake requests for pornographic images and crude language.

Now, however, the government’s Equalities Commission has accused them of “unlawful discrimination” for refusing to bake a cake promoting homosexual “marriage.” The commission demanded McArthur reach a settlement but he refused so now they are taking him to court.

The cake ordered was to have a “Support Gay Marriage” logo with a ‘QueerSpace’ identifier along with an image of the puppet characters Bert and Ernie.

“We are Christians and our Christianity reaches to every point of our lives, whether that’s at home or in the day-to-day running of the business,” McArthur says in a video about the case produced by The Christian Institute. They remain convinced they did the right thing in refusing to compromise their faith.

According to a June 26 letter signed by Sinead Eastwood, a legal officer of the Equalities Commission, Gareth Lee issued the complaint after he requested and paid for the cake on May 9.

According to testimony from both sides, Lee was contacted on May 11 by the bakery with the message that they could not comply with the order because they were Christian and offered him a full refund – a refund which was accepted days later, says McArthur.

Gareth Lee has been described by Belfast media reports as an LGBT activist.

The website for QueerSpace in Belfast lists a Gareth Lee as a prominent member – a recipient of the ‘Queers of the Decade’ award. He is pictured at the Belfast Gay Pride parade in 2008 wearing a “Support Gay Marriage” poster with Bert and Ernie – the exact same design requested for the cake.

The Christian Institute, which is supporting the bakery through their legal fund, reports that “online photographs of a QueerSpace event in May show that the group managed to get a cake decorated in the way they wanted from a different bakery.”

Liam Gibson, the Northern Ireland representative for the Society for the Protection of Unborn Children, told LifeSiteNews, “Sadly, this case is just another demonstration of the power of the homosexualist lobby and the vulnerability of anyone who won't comply with its agenda.”

Despite the fact that the Northern Ireland legislature has consistently rejected homosexual “marriage,” Gibson explained The Equality Act (Sexual Orientation) Regulations 2006 “was introduced to Northern Ireland at a time when the Province was under direct rule from Westminster.”  Many of Northern Ireland's politicians, he added, “objected to these regulations and warned that they were a threat to religious freedom, but were unable to prevent them from being introduced or to have them overturned once they became law.”

Given that the Northern Ireland Equality Commission was originally established to ensure the Catholic community, the minority religious community in Northern Ireland, was protected from unjust discrimination in employment, Gibson said the situation is ironic. “Far from protecting religious minorities today the Commission's purpose now seems to be to persecute them,” he told LifeSiteNews.

Christian Institute Director Colin Hart called on the government to take “urgent action to address this injustice by bringing in legislation that would introduce reasonable accommodation to protect those, who for religious or philosophical reasons, believe that marriage is the lifelong union of one man and one woman.”