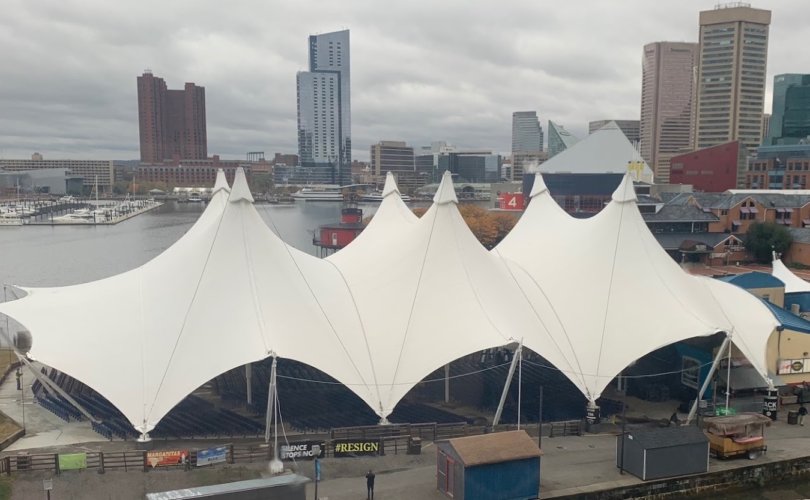 The view that U.S. bishops will have from their hotel ballroom meeting space of the Church Militant-sponsored “Bishops: Enough Is Enough” prayer rallyLifeSiteNews/Doug Mainwaring

BALTIMORE (LifeSiteNews) — After Church Militant (CM) won a court victory against the city of Baltimore which had sought to use legal tactics to prevent CM’s “Bishops: Enough Is Enough” prayer rally scheduled to take place just outside the hotel where the U.S. Conference of Catholic Bishops (USCCB) will be holding its annual fall gathering, Baltimore’s mayor has doubled down on trying kill the event.

“They pretend it’s the tone, and in this case, some idiocy that we are going to firebomb the Baltimore harbor and attack the bishops’ conference, but it’s really about the content of what would be said from the stage. And everybody knows it,” said Michael Voris when the city first canceled CM’s planned November 16 rally.

“Why is Mayor Brandon Scott of Baltimore supporting sex abuse and cover-up of it by the U.S. bishops?” asked the Church Militant founder in a searing video commentary. Voris believes the city isn’t actually worried about violence and is in reality acting on behalf of the USCCB which wants to stifle criticism of its mishandling of clergy sex abuse, most of which is homosexual.

“Why is the City Council going along with his decision to do so? Why is taxpayer money being used for this filth?  Because that is exactly what is going on with this whole legal matter the city of Baltimore is engaging in to prevent our Nov. 16 ‘Bishops: Enough is Enough’ rally from going forward,” continued Voris.

“Mayor Scott and the City Council are using every legal maneuver they can to stall this and just run out the clock.  Church Militant won a preliminary injunction against Mayor Scott and the city that prevents them from impeding any further planning and moving forward by us,” said Voris.

The city of Baltimore has filed for a motion for a stay of the preliminary injunction allowing the rally planning to continue unimpeded. It has also filed an appeal in the U.S. Fourth Circuit Court of Appeals in Richmond, Virginia.

“This motion would not be necessary if the City of Baltimore and its agents were not hellbent on ensuring that the Plaintiff’s prayer rally not go forward,” wrote Attorney Marc Randazza on behalf of St. Michael’s Media, the company behind Church Militant. “It is not abiding this Court’s orders, and it is doing whatever it takes to ensure that its will to censor this group is made into reality.”

After its court victory last week, St. Michael’s Media resumed discussions with the MECU Pavilion where the prayer rally is planned to take place, CM was informed by an MECU manager that “per the City we are still in a holding pattern and not allowed to execute the contract.”

“The September 14 order is still in effect and yet, within hours of this Court finding that the City violated St. Michael’s First Amendment rights, the City yet again violated the TRO [temporary restraining order],” Randazza wrote.

What more does the City need to persuade it that the First Amendment is not optional, but mandatory, for a state actor? And how much latitude does this Court wish to give to a state actor that will not abide its clear orders? Further, at what point has SMG simply been subsumed into the City government, so much that it is a mere tool of the City rather than acting independently?

We are beyond that point.

“How ironic that in the very city where the Star Bangled Banner still flew over Fort McHenry after the ALL-NIGHT British bombardment, the cherished values such as FREE SPEECH that our forefathers fought and died for are being DENIED for no good reason,” wrote long-time Maryland pro-life activist Jack Ames in an email.

“This is Tyranny!” he added.

The fabricated accusation by Baltimore’s Democrat mayor against Church Militant and its slate of speakers echoes the extreme tactics that have been employed by Congressional Democrats to cast conservative Christian citizens as dangerous threats to democracy and domestic terrorists since January 6, going so far as to militarize the nation’s capital and cordoning off the entire National Mall with metal fencing and razor wire from the Supreme Court to the U.S. Capitol to the White House.