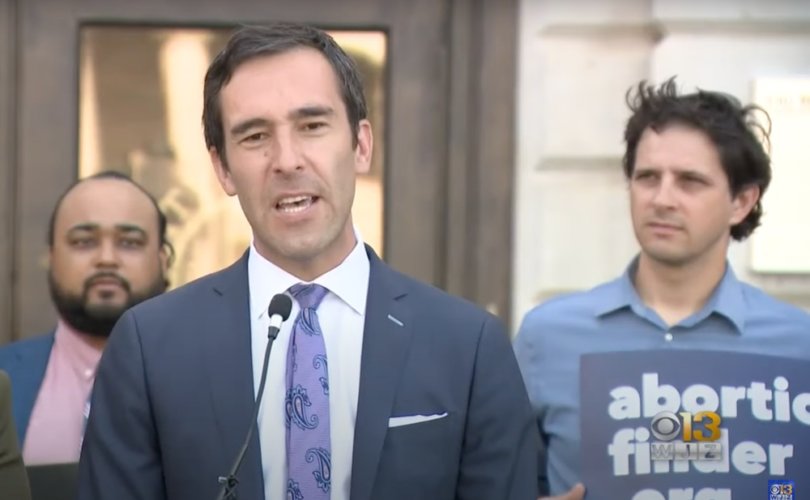 BALTIMORE (LifeSiteNews) — While some pro-life cities have voted in recent months and years to become “sanctuaries” for the unborn, others are moving in exactly the opposite direction.

On Monday, the Baltimore City Council unanimously approved a resolution to make their city a “sanctuary” for women seeking to kill their unborn children.

According to Cohen and Porter, Baltimore Mayor Brandon Scott, a Democrat, supports the measure.

— Article continues below Petition —
PETITION: Call on Biden to condemn violent pro-abortion rioters across America!
Show Petition Text
21354 have signed the petition.
Let's get to 22500!
Thank you for signing this petition!
Add your signature:
Show Petition Text

It’s unclear how large the abortion fund in the city will be. However, Cohen said it will consist of a combination of taxpayer dollars from the city and philanthropic donations, which will be funneled into pro-abortion organizations like The Baltimore Abortion Fund.

We are proud of the work we do to ensure access to abortion care in Maryland & are so glad that the Baltimore City Councils agrees that reproductive health is important enough to protect. pic.twitter.com/tSBxXZwQxi

Cohen has argued the resolution was necessary in light of the recent unprecedented leak of a Supreme Court draft majority opinion earlier this month.

According to the leaked document, at least a 5-4 majority on the Court is angled to overturn Roe v. Wade — the 1973 decision that created a federal “right to abortion” — when it rules in the Dobbs v. Jackson Women’s Health Organization case.

If the Court overturns Roe, individual states will once more be allowed to create their own laws regarding abortion, choosing to permit, restrict, or outright ban the practice.

In response to the potential overturning of Roe v. Wade, blue cities like Baltimore, along with Democrat-led states like Colorado and California (which this month established a $125 million spending package to secure abortion access), have moved to hedge against pro-life legislation and shore up protections for the abortion industry.

Meanwhile, pro-life states and municipalities have conversely enacted safeguards for the unborn.

A bevy of cities and counties in states, including Texas, Ohio, Iowa, and North Carolina, have voted to become “Sanctuary Cities for the Unborn,” in a growing grassroots campaign which predates the Supreme Court’s decision to take up the Dobbs case.

RELATED: ‘We’re outlawing the murder of innocent children’: Founder of Sanctuary Cities for the Unborn

In addition to the creation of sanctuary cities protecting the unborn, over a dozen states already have “trigger laws” on the books that will work to outright ban abortion as soon as Roe is overturned. In all, roughly half of all U.S. states are poised to at least severely restrict abortion if the federal “right to abortion” is struck down.

Baltimore’s Monday decision to become an abortion “sanctuary” highlights the fact that a post-Roe America will become a legal patchwork in which some localities ban abortion while others actively finance and promote it.

That fact has led many pro-lifers to emphasize that the overturning of Roe v. Wade will be just the beginning, not the end, of the pro-life movement.