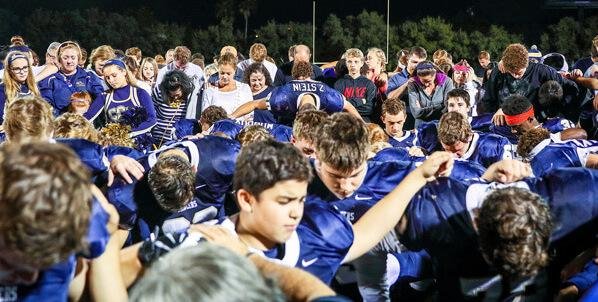 TAMPA, Florida, November 18, 2019 (LifeSiteNews) — A U.S. Court of Appeals has reversed a lower court’s decision prohibiting two Christian schools from praying over the loudspeaker at the Citrus Bowl before a state championship game.

The 11th Circuit Court acknowledged that Cambridge Christian School’s argument that its free speech and free exercise rights had been violated have merit.

In 2015, the Florida High School Athletic Association (FHSAA) had forbidden Cambridge Christian School (CCS) from using the public address system at the Citrus Bowl to pray before the start of a football game against University Christian School.

“The FHSAA suggested that because the stadium was city-owned and the FHSAA a state agency, it would violate the Constitution to allow two private Christian schools to pray over a state-owned microphone for less than a minute,” explained a statement from First Liberty Institute, which is representing CCS.

After the FHSAA issued its decision, the players, coaches and fans were reportedly devastated.

“We were really excited to play in the championship game. It’s been our tradition to pray ever since I’ve been on the team. But then they said we couldn’t pray and our tradition was ruined. It was so disappointing,” said team member Jacob Enns at the time.

“By banning the pregame prayer over the loudspeaker, the FHSAA sent a message to these students that prayer is wrong and something you should be ashamed of. That is dangerous and unconstitutional,” asserted Hiram Sasser, general counsel for First Liberty.

In February 2017, a federal district judge sided with the FHSAA. First Liberty Institute appealed to the 11th Circuit, arguing that the First Amendment protects the rights of students and teachers at a private Christian school to pray before a football game, especially when both teams are Christian and have a tradition of prayer before games.

“We are grateful to have won this appeal and look forward to presenting our case on behalf of Cambridge Christian School to the district court,” said Jeremy Dys, special counsel for litigation and communications at First Liberty, which is representing the school. “The First Amendment protects the rights of students and teachers at a private Christian school to pray before a football game, especially when both teams are Christian and have a tradition of prayer before games.”