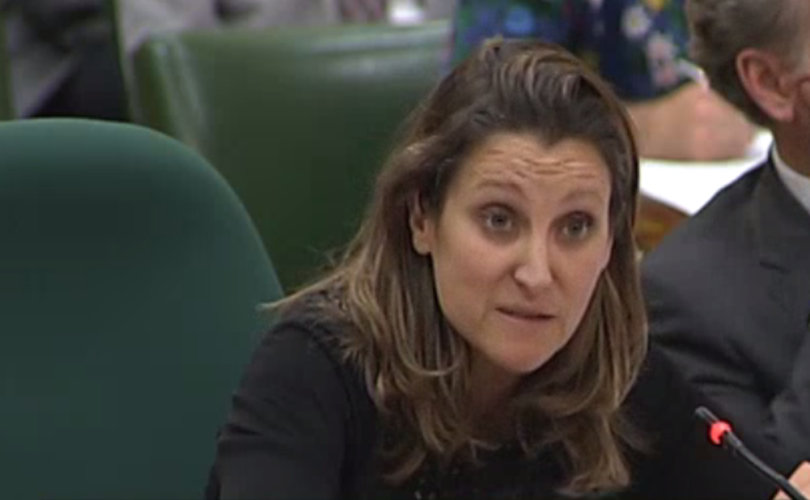 OTTAWA, Ontario (LifeSiteNews) — Canada’s Minister of Finance and Deputy Prime Minister Chrystia Freeland admitted Wednesday that the reason some Freedom Convoy supporters’ bank accounts were frozen under the Emergencies Act (EA) was to “convince” them to “listen to reason,” adding that some accounts will stay locked.

“These accounts, bank accounts, were frozen to convince people who took part in the occupation and illegal blockades to listen to reason,” said Freeland, as translated from French during a press conference announcing the end of the EA.

Freeland then said that “after this, we asked the banks to unfreeze these bank accounts.”

On Wednesday at the same press conference, Prime Minister Justin Trudeau announced that he was ending the EA, saying “the situation is no longer an emergency.”

Still, Trudeau noted that for the future, a “reflection” on certain “threats” needs to be looked at. He said these include the “mobilization through social media, of extraordinarily motivated crowds” along with “misinformation and disinformation” and “foreign money and foreign influence.”

The EA had allowed the government the power to freeze anyone’s bank account associated with the convoy without a court order. It proceeded to put a block on several accounts.

By law, within 60 days of triggering the EA, it is required that an inquiry be initiated to investigate why the Act was needed. It is then required that Canada’s Parliament be presented with a report within 360 days with the findings.

Yesterday, the interim leader of the Conservative Party of Canada (CPC) said Trudeau ended the EA only for “personal political gain.”

Trudeau took the unprecedented step of invoking the EA on February 14, claiming he needed it to deal with the Freedom Convoy. The demonstrators had been in Ottawa for the past three weeks protesting COVID mandates.