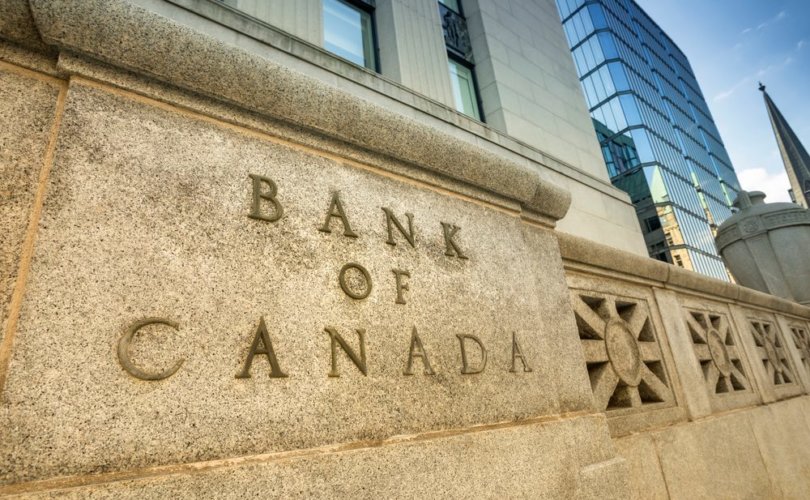 OTTAWA, Ontario, (LifeSiteNews) – A Canadian bank researcher who works from home says he was suspended from his job at the Bank of Canada for refusing the COVID jabs, and that his employer would not recognize his Catholic faith as a valid reason for a vaccine exemption.

According to Blacklock’s Reporter, 36-year-old Joseph Hickey said that Canada’s bank not only suspended him but threatened to fire him outright unless he complies with government jab mandates.

“This came out of the blue. It was a change to terms of my employment that I do not agree with,” said Hickey, adding that he got no offer of severance, nor Employment Insurance, and his suspension was “very quick, very harsh.”

Hickey said the Bank of Canada was “strong-arming” him to “get vaccinated.”

“My salary was removed, my benefits were removed and [so was] access to my computer,” said Hickey.

Hickey was suspended on November 22.

He received a letter from management stating that his job would “ultimately be terminated if you remain non-compliant.”

Hickey said that this is a “clear case of coercion” and that the Bank of Canada is essentially trying to “coerce employees into becoming vaccinated even if they worked from home.”

According to Hickey, bank management would not tell him how many workers had been suspended for not getting the shots.

“If we’re at a point where the government can violate individual freedom of conscience in such a direct and brutal way then we are in a really dangerous place,” said Hickey.

Hickey worked in the Digital Economy and Advanced Analytics Division of the Bank’s Canadian Economic Analysis Department before being forced on leave. He is also the volunteer executive director of the Ontario Civil Liberties Association.

The Treasury Board of Canada Secretariat, under its new policy, has mandated that all federal public servants in the Core Public Administration (CPA), including members and reservists of the Royal Canadian Mounted Police (RCMP), “must be vaccinated against COVID-19.”

This mandate applies to all employees, even those working from home, like Hickey.

The Treasury Board is following a November 15 jab disclosure deadline set by the federal government. All 280,000 employees had to show that they had two COVID jabs or a medical or religious exemption by this date. Otherwise, they were forced to go on unpaid leave.

Around 98 percent of the Treasury Board workers had the COVID jabs, with 4,662 workers stating they would not take the jab or reveal their medical status, according to Blacklock’s Reporter.

Many do not want the injections due to safety concerns surrounding the jabs. There have been reports of thousands of people developing tumors after getting their COVID shots. Meanwhile the list of U.S. FDA-recognized adverse events has grown from severe anaphylactic reactions to include fatal thrombotic events, the inflammatory heart condition myocarditis, and neurologically disabling disease like Guillain Barré Syndrome, as well as thousands of recorded deaths and permanent disabilities.

On November 12 Hickey, who said his position was not unionized, sent a letter to his bank management asking for a religious, medical, and human rights exemption. He cited his Catholic faith and the fact he is a teleworker.

“There is no medical reason to require me to be vaccinated while I am working from home. There is also no reason that the status quo of full telework cannot be maintained for employees who choose not to be vaccinated. Therefore, I request to be accommodated by continuing to work from home, as I have been doing since March 2020,” wrote Hickey.

As for religious reasons, Hickey wrote that he comes from a “deep personal conviction that the right choice for my health is for me not to take a COVID-19 vaccine.”

“From my analysis of the available evidence, I have also come to the deep conviction that the government should not be recommending these vaccines for young and healthy individuals; I therefore object, as a matter of conscience, to participating in the government’s vaccination program,” wrote Hickey.

“Due to these deep personal convictions, I request an accommodation on the basis of freedom of conscience and religion.”

He added that his “personal conviction is informed” by “the values imparted to me from my upbringing as a member of the Catholic Church and as a student in Catholic elementary and middle school in Ontario.”

Hickey also wrote that a “family tragedy” involving his father who “died as a result of an adverse event from a pharmaceutical product” also formed part of his personal conviction.

“I am concerned about the known and unknown medical risks of COVID-19 vaccines. Administration of the AstraZeneca vaccine was halted in Canada after several people died due to lethal blood clots caused by the vaccine,” wrote Hickey.

“The currently-available COVID-19 vaccines have also been associated with many serious adverse health events. Due to the risks of heart inflammation (myocarditis and pericarditis).”

However, Hickey said that the bank refused his exemption with no explanation given.

Hickey said that if governments are not going to “allow individuals” to refuse the jabs, then they “making society very fragile.”

“You are subjecting people to the dictates of a central authority, and that central authority is human and fallible and can be wrong. Where does it go next” Hickey told Blacklock’s Reporter.

The province of Ontario has now recommended that the Moderna vaccine not be given to males under 24.