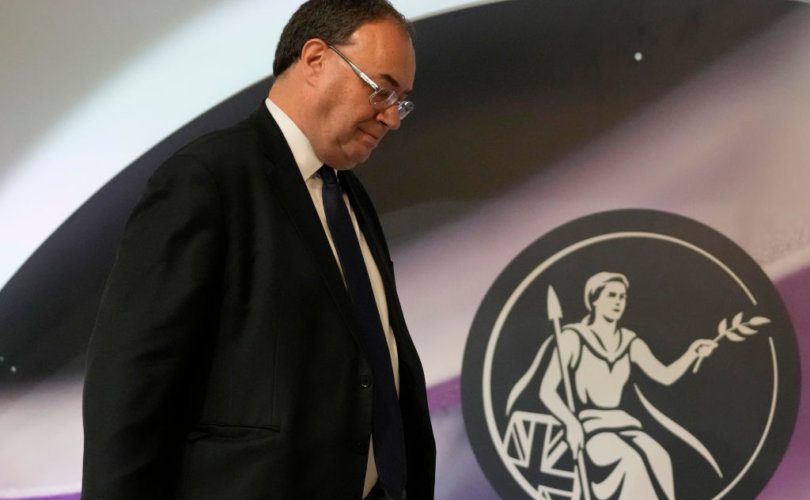 LONDON (LifeSiteNews) – The governor of the Bank of England has warned that rises in food prices in Britain could reach “apocalyptic” levels by the end of the year.

Speaking to the House of Commons Treasury Select Committee Monday, Andrew Bailey admitted feeling “helpless” against relentless inflation rates. Bailey said a “series of supply shocks” had caused “unprecedented” economic fallout, and the banker predicted inflation reaching double digits by the close of 2022. He expects the rate to peak at around 10.2 percent, the country’s highest level since 1982.

Bailey told committee MPs that an “impact of … Russia’s invasion of Ukraine” includes the “risk of a further energy price shock, which would come from the cutting off of gas and distillates, such as products like diesel.”

Additionally, given Ukraine’s status as a large supplier of wheat (around 10 percent of the global supply) and cooking oil, Bailey stated that while the country is still able to produce and store the goods, shipping them out of the afflicted nation has become a major obstacle amid the conflict.

Relating details of a conversation he had with Ukraine’s finance minister, Bailey said that the minister was “optimistic about crop planting” but that the shipping problem “is getting worse.”

Likewise laying much of the blame on the Russo-Ukrainian conflict, Shah said that wheat normally purchased from Ukraine and fertilizer sourced from Russia will both become increasingly difficult to acquire, leading many developing countries into “an even bigger food crisis this summer and this fall.”

These “outside forces,” Bailey added, “will have an impact on domestic demand and it will dampen activity, and I’m afraid it looks like it will increase unemployment.”

Despite the increase to the cost of living, and the suppression of national wages by inflation, the governor – who himself earns £570,000 per year ($711,000) – urged citizens to “think and reflect” before requesting pay rises from their bosses.

Bailey had provoked consternation earlier this year when he first proposed that workers refrain from asking for large salary increases, arguing that “moderation” in wage rises would help stop inflation becoming embedded in the economy.

Speaking to the treasury committee, he defended his comments and insisted that he had not taken a suggested raise “because I felt that was the right thing for me personally.”