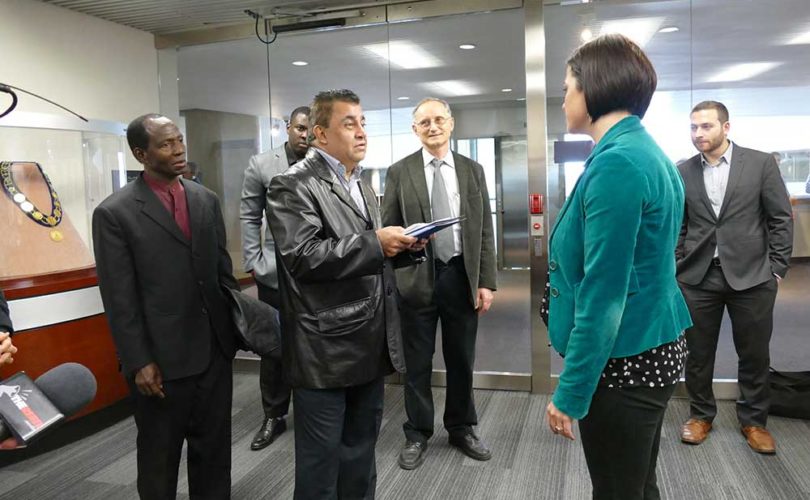 TORONTO, November 9, 2015 (LifeSiteNews) – The Christian organization that the City of Toronto banned from holding a musical festival in a downtown public square joined LifeSiteNews on Monday in delivering a 30,000-name petition to Mayor John Tory’s office.

In addition they delivered a petition of around 10,000 signatures by TheRebel.media. Both called on the city to reverse its decision.

If by Tuesday the city has not revoked its ruling, the group, Voices of the Nations (VON), will make good its promise to sue the city and the board for violating its Charter rights of freedom of religion and expression.

The conflict began when official Natalie Belman, manager of events for Yonge-Dundas Square, refused to grant VON a permit to use the square for its annual music festival, because she deemed the singing during the multi-denominational event was “proselytizing” and therefore against city policy.

“If you’re praising Jesus, ‘praise the Lord,’ and ‘there’s no God like Jehovah,’ that type of thing, that’s proselytizing,” she told Leye Oyelami, VON’s event coordinator, at the time. “That is a big problem. … That [kind of thing], from the stage, is not acceptable.”

He pointed out that VON has held its summer music festival in the spacious square in the heart of Toronto’s teeming downtown core for five years. “And then all of a sudden they’re saying we’re proselytizing because we spoke the name of Jehovah and Jesus.”

And thousands of concerned citizens seem to feel the same way as Ruparelia.

A LifeSiteNews petition launched October 29 on VON’s behalf has been signed by 30,453 to date.

Sign the petition to the City of Toronto asking that they lift the ban on the Voices of the Nations music festival. Click here.

The petition follows a legal warning the Calgary-based Justice Centre for Constitutional Freedoms sent the City of Toronto and Yonge-Dundas Square management board November 2.

The letter stated VON would sue both entities for violating its Charter right to religious freedom and expression, if the board did not repeal the decision by November 10.

A volunteer board of management appointed by Toronto City Council operates the Square. Taxpayers contribute about $400,000 of the Square’s annual $2.3 million budget to help pay staff salaries and other costs.

“This decision constitutes a direct violation of the fundamental freedoms of expression and religion which are guaranteed by the Canadian Charter of Rights and Freedoms,” wrote JCCF lawyer Marty Moore.

“We request that you immediately reverse this Decision and approve VON’s application.  Failure to do so will necessitate a court action against the City of Toronto and the Yonge-Dundas Square Board of Management (“YDS”) for its censorship of expression and its violation of religious freedom.”

After leaving the petition at the mayor’s office Monday, VON president Peter Ruparelia says his group will not give up.

“If I have to go all the way, even to the Supreme Court if necessary, we’re going to do that,” Ruparelia told LifeSiteNews, “because this is not about one… man or one organization, it’s about the name of – ”

“The name of Christ,” Ruparelia concurred. “And it’s our beliefs. … All we were doing was celebrating our beliefs.”

Ruparelia says the time has come for his co-religionists to take a stand. “As Christians, you know, we’ve been sitting back for so long. … We’ve been losing ground in the City of Toronto.”

“That’s why we need as Christians, we need to come together and to unite as one, and what better cause, now, than this cause…to unite the body of Christ?” he said.

No response had been received from the mayor’s office by deadline.

The LifeSiteNews petition remains open and continues to grow. To add your signature, go here.

Update: The headline has been adjusted to say 40,000 in order to reflect the signatories of both the LifeSite and TheRebel.media petitions.