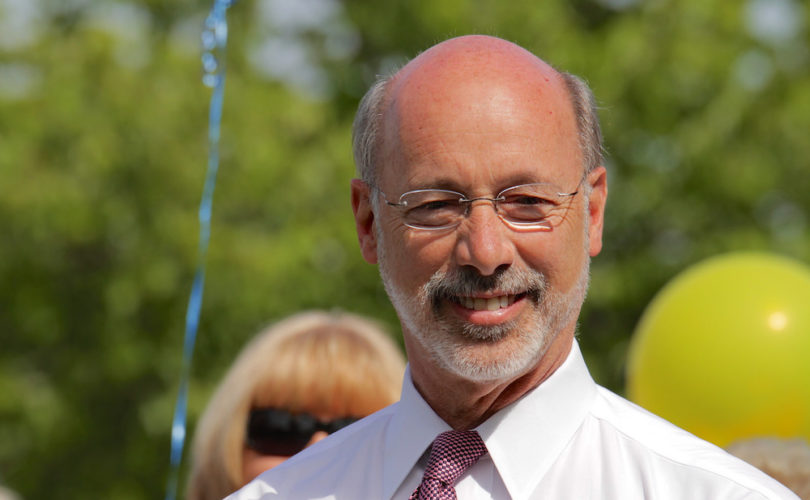 HARRISBURG, Pennsylvania, April 12, 2016 (LifeSiteNews) – A bill that would have banned late-term abortions and prevented unborn children from being dismembered in the womb has stalled in Pennsylvania, after the governor called the bill “a huge step backward.”

Pennsylvania House Bill 1948 would reduce the legal abortion limit from 24 weeks to 20 weeks. It would also bar dismemberment abortion, known as dilation and evacuation (D&E) abortion, in the state.

The bill appeared to be heading for passage in the state House of Representatives, but on Monday the bill was postponed indefinitely after Democratic Governor Tom Wolf promised to veto the legislation.

Upon reviewing the proposal, Gov. Wolf said, “This is really a huge step backward for the state.”

Other opponents of the bill played on Donald Trump's comments that women who have an abortion should face “some form of punishment.” The state's Physician General – a transgender man named Dr. Richard Levine, who now goes by Rachel, said yesterday, “This bill, in fact, punishes women.”

That echoes a charge the state Republican Party made against the governor just before his election, when the GOP sent out a mailer asking, “Will pro-abortion Tom Wolf take us back?”

The view of Wolf and Planned Parenthood that late-term abortion should be legal dredges up memories of the Kermit Gosnell trial and puts them at odds with the convicted abortionist's defense attorney, Jack McMahon, who said Gosnell's case convinced him that abortion should be significantly more restricted.

“I've come out of this case realizing that 24 weeks is a bad determiner” of viability, McMahon said. “It should be like 16, 17 weeks…the law should be changed to that. I think pro-choice would still have the right to choose, but they'd have to choose earlier.”

“I think more regulation should come out of” this case, he said.

Any further regulations seem a remote possibility under Gov. Wolf, a former abortion facility escort who has strong ties to the abortion industry. When the news of the Center for Medical Progress' undercover videos broke, Planned Parenthood lobbyist Sari Stevens told him it “has not reached mainstream media yet; we are trying to keep it that way.”

He also reappointed Pedro Cortes as secretary of state, although Cortes turned a blind eye to Gosnell's activities during his previous tenure in office.

Gov. Wolf worried that limiting the availability of abortion would make the Keystone State seem unduly conservative. “We need to make sure the rest of the world sees Pennsylvania as we see it, which is a very progressive, dynamic place,” he said.

But the state's pro-life leaders say defeating this ban is anything but forward-looking.

“It is barbaric and cruel to be pulling them apart limb-from-limb in the most excruciatingly painful way possible,” said Maria Gallagher, legislative director of the Pennsylvania Pro-Life Federation.

“A recent statewide poll shows that 61 percent of Pennsylvanians support a ban on dismemberment abortions. Among women, the support is even higher at 64 percent,” she wrote in a letter to the editor of a local newspaper last week. “It is critically important for the General Assembly to ban a practice that we should all agree is a flagrant human rights violation and unworthy of a commonwealth as great as Pennsylvania.”

An estimated 1,550 Pennsylvanian babies died as a result of D&E abortion in 2014, according to the federation.

“The United States is only one of seven countries worldwide that allow the horror of dismemberment abortions,” according to the federation's website. “These countries include China, Vietnam, North Korea, and Singapore, all of whom perform horrible human rights violations.”

“Is this the kind of company the United States wants to keep?” the group asks.